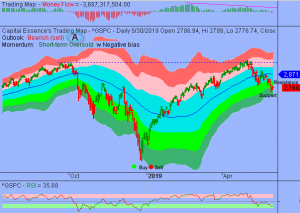 Good Morning, this is Capital Essence’s Market Outlook (the technical analysis of financial markets) for Friday May 31, 2019.

We’ve noted in the previous Market Outlook that: “current price structure suggests that market has found a near-term support plateau.  S&P’s 2766 is the line in the sand.  All bets are off should the bulls fail to secure this support.”  As anticipated, S&P advanced as much as 0.6 percent on Thursday, nearly touching the 2800 level in a rebound from short-term oversold conditions.  The bench mark gauge however, gave back most of the early gain to close at 2,788.86, up 02 percent, as worries over the global economy and trade lingered.  The Dow Jones Industrial Average added 0.2 percent 25,169.88.  The Nasdaq Composite advanced 0.3 percent to 7,567.72.  The CBOE Volatility Index (VIX), widely considered the best gauge of fear in the market, fell more than 3 percent to close at 17.30.

Energy sector was the worst-performing group on Thursday, as oil prices tumbled on global growth concerns. More negative trade rhetoric out of China, coupled with reports that Beijing put U.S. soybean purchases on hold, fed into the narrative that trade tensions will slow economic growth.  As such, the Energy Select Sector SPDR ETF (XLE) fell 1.27 percent on the day but is up more than 4 percent YTD, underperformed the S&P.  Now the question is whether recent selloff is a beginning of and end or there’re more pains ahead?  Below is an update look at a trade in XLE. 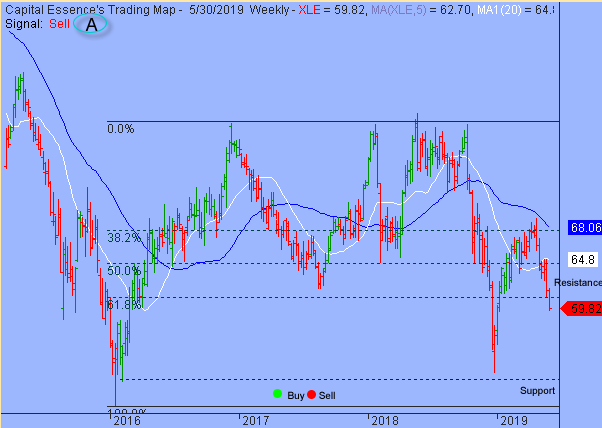 Our “U.S. Market Trading Map” painted XLE bars in red (sell) – see area ‘A’ in the chart. Over the past few weeks, XLE had been trending lower after the late 2018 rally ran out of steam near the 1-year moving average, a key technical level based on moving averages.  This week’s selloff pushed the ETF below the 61.8% Fibonacci retracement of the 2016-2018 trading range, signify a bearish breakout.  This is a negative development, increased the probability for a retest of the more important support near the 53-50 zone. 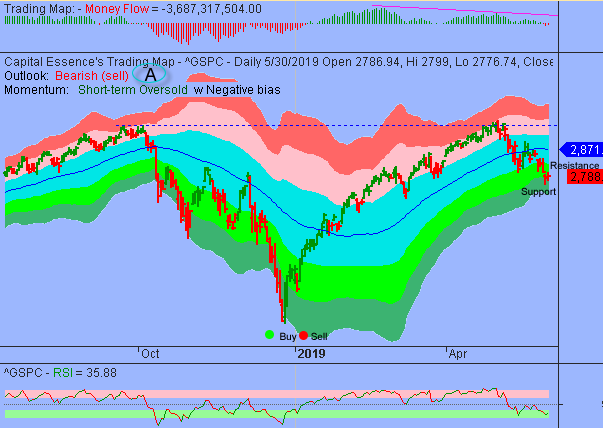 S&P rollover after the early breakout attempt ran out of steam near the important sentiment 2800 mark– the level that acted as support for most of May, until the index fell below it on Wednesday.  Technically speaking, the longer the index holds below this resistance the stronger it becomes.  Adding to concerns is the negative Money Flow measure, which began sloping lower since February as prices ascended.  This is an intermediate-term bearish development.  Right now, the most important thing to watch is trading behavior near 2766.  We’d turn particular bearish if the index close twice below that level.

In summary, S&P rally attempt failed at formidable resistance.  If the index fails to hold above 2766 this week, then the next stop will be 2700 with the possibility of a brief breakdown below that level.