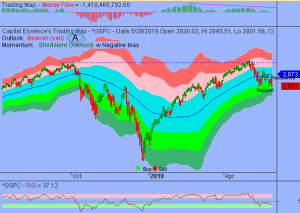 Good Morning, this is Capital Essence’s Market Outlook (the technical analysis of financial markets) for Wednesday May 29, 2019.

We’ve noted in the previous Market Outlook that: “S&P’s oversold rally is showing signs of buyer’s fatigue, noting a struggle for the index to get past Thursday’s bearish breakaway gap.  There is a good chance S&P will see some near-term weakness.”  As anticipated, S&P closed lower Tuesday, fell 0.8 percent to 2,802.39, as investors continued to show little enthusiasm for risk assets.  The Dow Jones Industrial Average dropped 0.9 percent to 25,347.77. The Nasdaq Composite fell 0.4 percent to end the day at 7,607.35.  The CBOE Volatility Index (VIX), widely considered the best gauge of fear in the market, fell more than 6 percent to close at 15.85.

Industrial sector led the market lower as investors remained concerned about a protracted trade war with China. Donald Trump said on Monday the U.S. was “not ready” to make a deal with China, before adding he expected one in the future. Trump also said tariffs on Chinese imports could go up “substantially”.  As such, the Industrial Select Sector SPDR ETF (XLI) fell 0.92 percent on the day but is up 13.5 percent YTD, outperformed the S&P.  Now the question is whether recent selloff is a pause that refreshes or it’s a beginning of something worse?  Below is an update look at a trade in XLI. 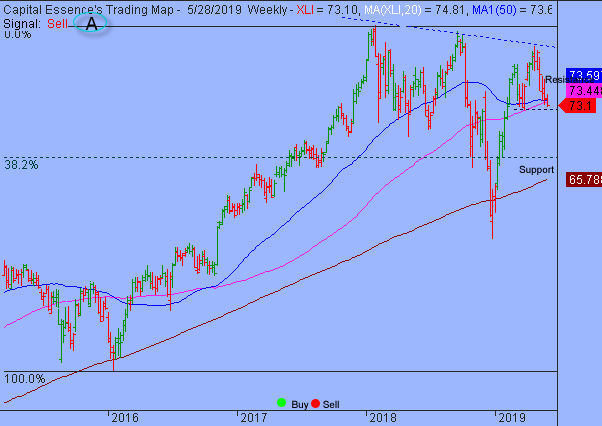 Our “U.S. Market Trading Map” painted XLI bars in red (sell) – see area ‘A’ in the chart. Over the past few weeks, XLI has been basing sideways using the 2-year moving average, a key technical level based on moving averages, as support after the late 2018 rally ran out of steam near the 2018 falling trend line.  This week’s selloff pushed the ETF below the 2-year moving average, signify a bearish breakout.  Right now follow-through is the key.  A close below the late March low of 72.79 on a weekly basis will confirm the bearish signal and a retest of the more important support near the 68-64 zone, or the 38.2% Fibonacci retracement and the 4-year moving average, should be expected.

XLI has resistance near 75.  Short-term traders could use that level as the logical level to measure risk against. 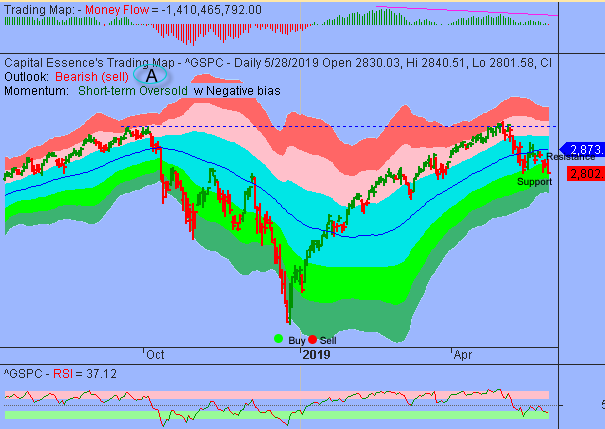 Once again, S&P moved down to test support at the important sentiment 2800 zone after the early rally attempt ran out of steam near last week’s bearish breakaway gap.  As mentioned, short-term indicators are oversold but problematic.  The index had several opportunities for breaking out over the past few days, and its failure to stage a meaningful rally is a bearish development.  Tuesday’s late day selloff is a clear indication of buyer’s fatigue, suggesting that the S&P might have to move to a much lower level to attract new buyers.  Perhaps the negative Money Flow measure is the best illustration of the bears’ case.

For now, 2800 is the line in the sand.  A close below that level will trigger another selloff with initial downside target near 2790-2776.

In summary, Tuesday’s late day selloff pushed S&P down to key support zone at the important sentiment 2800 mark.  Money Flow measure is not favorable over the near to intermediate term, suggesting the support might not hold for long.  A failure to bounce off key support means that long-term buying pressure has finally been exhausted. The stronger the support level, the more powerful the selloff.