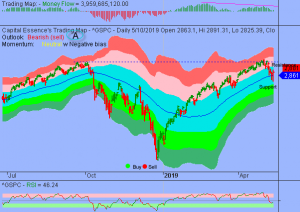 Good Morning, this is Capital Essence’s Market Outlook (the technical analysis of financial markets) for Monday May 13, 2019.

We’ve noted in the previous Market Outlook that: “S&P tested and respected support at the trend channel moving average. Thursday’s bullish reversal doji candlestick pattern suggested that an important near-term low has been established.  So it wouldn’t surprise us to see at least an attempt to rally over the next couple of days.”  As anticipated, the S&P dropped as much as 1.6 percent in early Friday session on persisting trade uncertainty, but positive trade rhetoric helped lift the benchmark index to a gain of 0.4 percent to close at 2,881.40.  The Dow Jones Industrial Average added 0.5 percent at 25,942.37.  The Nasdaq Composite ended the day slightly higher at 7,916.94.  The CBOE Volatility Index (VIX), widely considered the best gauge of fear in the market, fell 16 percent to close at 16.04.

Companies that are hinging on a trade resolution remained under some pressure despite the day’s reversal.  Energy stocks took a big hit on concerns that growing trade between the world’s two largest oil consumers could affect oil demand. The United States and China together accounted for 34% of global oil consumption in the first quarter of 2019, data from the International Energy Agency shows.  As such, the Energy Select Sector SPDR ETF (XLE) fell 0.3 percent last week but is up more than 11 percent YTD, underperformed the S&P.  Now the question is whether recent pullback is a pause that refreshes or it’s a beginning of something worse?  Below is an update look at a trade in XLE. 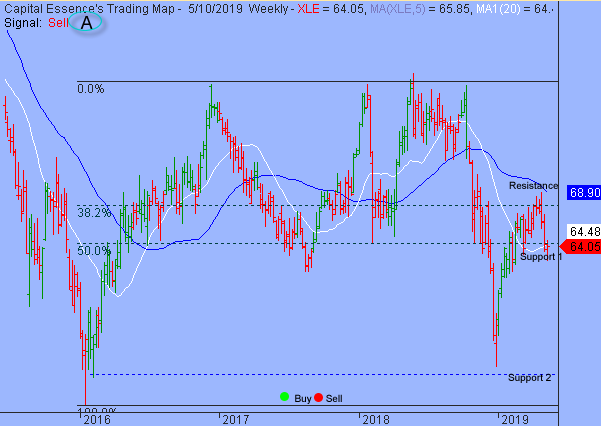 Our “U.S. Market Trading Map” painted XLE bars in red (sell) – see area ‘A’ in the chart.  Over the past few weeks, XLE has been trending lower in a short-term corrective mode after the late 2018 rally ran out of steam near the 1-year moving average, a key technical level based on moving averages.  The correction is testing support at the 64 zone.  That level is significant in charting terms.  It roughly corresponds with the 50% Fibonacci retracement of the 2016-2018 upswing and the 20-week moving average.  A close below 64 will signify a bearish breakout and a retest of the late 2018 low, around 53 should be expected.

XLE has resistance between 66-69.  Short-term traders could use that level as the logical level to measure risk against. 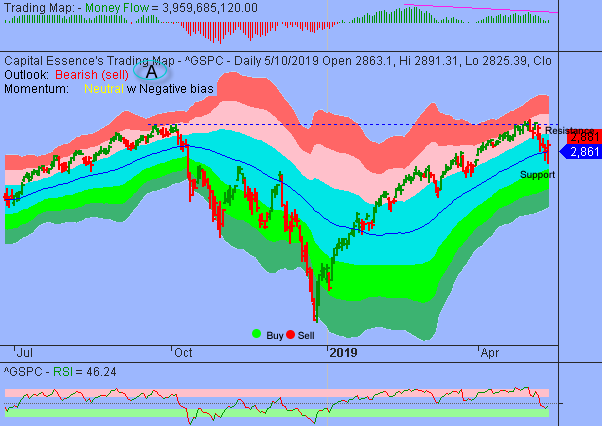 Once again, the S&P tested and bounced off support at the 2830 zone, or the late March bullish breakaway gap.  That level roughly corresponds with the upper boundary of the green band. Momentum shifted higher from near oversold zone, allowing additional upside probing.  Nevertheless, Money Flow measure does not appeared strong enough to generate widespread breakouts.  While more backing and filling would not be a surprise, a close below 2830 would see a massive pickup in volatility.

In summary, so far last week’s oversold rally has proved nothing as far as its staying power or as a possible trend reversal.  While there is a high probability that the late-day rally will momentum but a close above S&P’s 2915 is needed before there is any real prospect of a change in the short-term downward pressure.