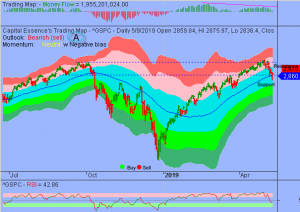 Good Morning, this is Capital Essence’s Market Outlook (the technical analysis of financial markets) for Friday May 10, 2019.

We’ve noted in the previous Market Outlook that: “momentum has weakened as S&P moved down to test support at the trend channel moving average.  The longer the index stays near that level, the more vulnerable it is to lower prices.  This is the real danger in the current market.”  As anticipated, the S&P dropped as much as 1.5 percent in early Thursday session on concerns about an elongated trade war with China before buyers stepped in and pushed prices off the intraday low.  For the day, the bench mark gauge fell 0.3 percent to 2,870.72. The Nasdaq Composite was down 0.41 percent to 7,910.59.  The Dow Jones Industrial Average fell 0.5 percent to 25,828.36.  The CBOE Volatility Index (VIX), widely considered the best gauge of fear in the market, fell more than 1 percent to close at 19.10.

Chipmakers, sensitive to higher tariffs, took a hit on Thursday as Intel fell nearly 5.3% after sinking nearly 5% in the previous session.  Nvidia and Micron also dropped about 2.1% and 1.2% respectively.  As such, the iShares PHLX Semiconductor ETF (SOXX) fell 1.10 percent on the day but is up 28 percent YTD, outperformed the S&P by a wide margin.  Now the question is whether recent pullback is a pause that refreshes or it’s a beginning of something worse?  Below is an update look at a trade in SOXX.

Our “U.S. Market Trading Map” painted SOXX bars in red (sell) – see area ‘A’ in the chart.  The first dominant feature on the chart is the rising trend line starting in 2015.  The second dominant feature of the chart is the downward trend since 2018.  The late 2018 selloff found support near the 38.2% Fibonacci retracement, a key technical level based on Fibonacci levels.  The early 2019 rally pushed the ETF above the 2018 highs, signify a bullish reversal and upside breakout.

Over the past few weeks, SOXX has been trending lower in a short-term corrective mode as it works off overbought conditions.  The correction is testing support at the 198 zone.  That level is significant in charting terms.  It roughly corresponds with the 2018 high and the 2019 rising trend line.  A close below 198 will jeopardize the April’s bullish signal and a test of the more important support near the 185 zone should be expected.

SOXX has resistance near 218.  Short-term traders could use that level as the logical level to measure risk against. 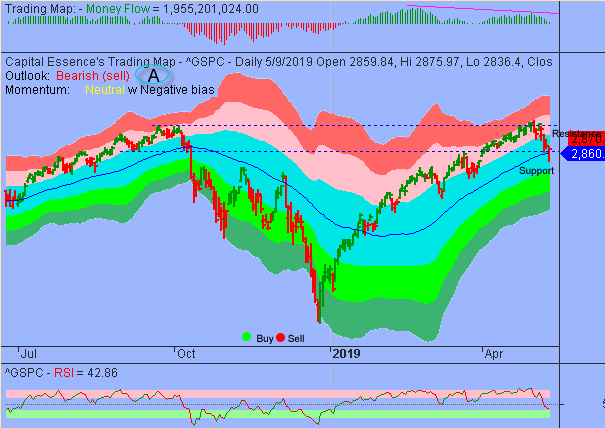 S&P moved down to test support at the trend channel moving average after the March rally ran out of steam near the lower boundary of the red band, a key technical level. In accordance to the Japanese candlestick pattern recognition, Thursday’s bullish long tail candlestick is a clear indication of demand overwhelming supply.  If the textbook stands true then the S&P is at or very close to key turning point.

Market internal has been weakened but return of oversold conditions on an intraday basis had helped setting the stage for a short-term bounce. Money Flow measure is flashing a weak bearish signal as it’s on a verge of falling below the zero line.  The indicator printed a lower high as prices broke out to new highs in late April, indicating less money’s chasing stocks higher.  This will put a lid on the upside.

For now, 2860 is the line in the sand.  We’d turn particular bearish if the index closes twice below that level.

In summary, S&P tested and respected support at the trend channel moving average. Thursday’s bullish reversal doji candlestick pattern suggested that an important near-term low has been established.  So it wouldn’t surprise us to see at least an attempt to rally over the next couple of days.