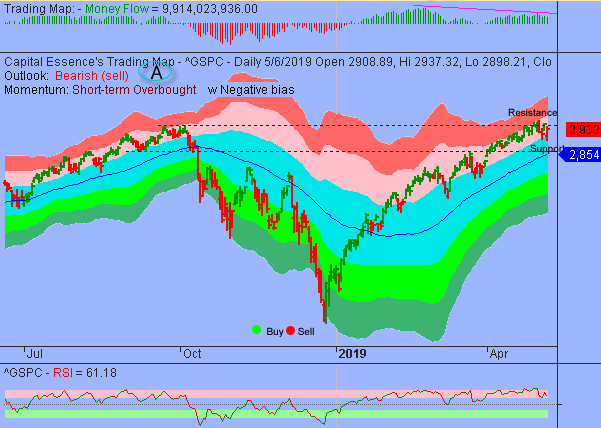 Good Morning, this is Capital Essence’s Market Outlook (the technical analysis of financial markets) for Tuesday May 7, 2019.

We’ve noted in the previous Market Outlook that: “our works on price structure and momentum suggested strongly that the S&P is in an early stage of the distribution phase, the period in which smart money sell (distribute) their positions.”  As anticipated, stocks sold off sharply in early Monday session that saw the S&P fell as much as 1.2 percent after threats from Donald Trump to increase China tariffs rattled equity markets around the world and catalyzed a 5.6 percent drop in China’s Shanghai Composite.  For the day, the bench mark gauge fell 0.4 percent to 2,932.47. The Nasdaq Composite was down 0.5 percent to 8,123.29.  The Dow Jones Industrial Average lost 0.3 percent to 26,438.48.  The CBOE Volatility Index (VIX), widely considered the best gauge of fear in the market, soared 20 percent to close at 15.44.

Donald Trump’s threat to hike tariffs on Chinese imports over the weekend contributed to the underperformance of the materials, industrials, and information technology sectors. These sectors contain many companies with Chinese exposure.  As such, the Materials Select Sector SPDR ETF (XLB) fell 1.43 percent on the day but is up more than 10 percent YTD, underperformed the S&P by a wide margin.  Now the question is whether recent selloff is a beginning of an end or there’re more pains ahead?  Below is an update look at a trade in XLB. 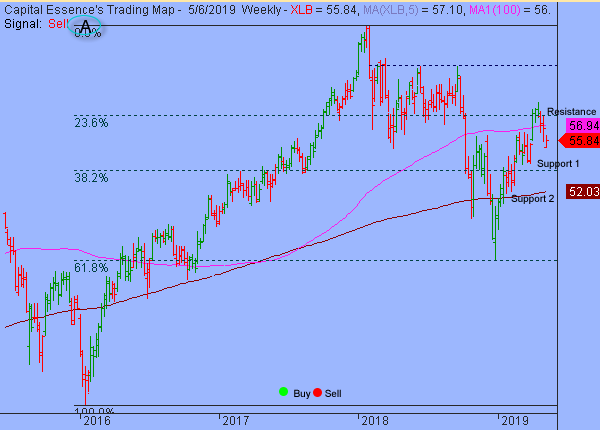 Our “U.S. Market Trading Map” painted XLB bars in red (sell) – see area ‘A’ in the chart.  Over the past few weeks, XLB has been trending lower after the late 2018 recovery rally ran out of steam near the 23.6% Fibonacci retracement. The mid-April selloff pushed the ETF below the 2-year moving average, a key technical level based moving averages, signify a bearish reversal and downside breakout.  This week’s downside follow-through confirmed the bearish signal.  This is a negative development, increased the probability for a test of support at the 38.2% Fibonacci retracement, just above 53.  A close below that level has measured move to around 52, or the 4-year moving average.

XLB has resistance near 58.  Short-term traders could use that level as the logical level to measure risk against.

Short-term technical outlook shifted to bearish (sell).  Last changed May 6, 2019 from bullish (buy) (see area ‘A’ in the chart).

Once again, S&P sold off after recent test of resistance near the 2950 zone was met with a new wave of selling interest.  Monday’s selloff found support near the important sentiment 2900 mark.  Momentum indicator shifted lower from overbought zone, suggesting further short-term weakness likely.  Money Flow measure is flashing a weak bullish signal as it diverged from price actions over the past months.  The indicator peaked in February and formed series of lower highs as prices ascending, suggesting less and less money are chasing the rally. Nevertheless, the fact that the S&P managed to hold above 2900 despite overbought conditions, indicating an internal strength. In fact, trading actions over the past few days represented an orderly high-level consolidation period.  This is a positive development, suggested that the path with least resistance is still significantly higher here.

In summary, several key technical indicators suggest that S&P is in a midst of a short-term consolidation phase.   The fact that the index managed to hold on to most of recent gain despite overbought conditions, indicating an internal strength.  This increases the probability that the S&P will break out from current trading range as soon as the market shakes off the excessive bullishness.