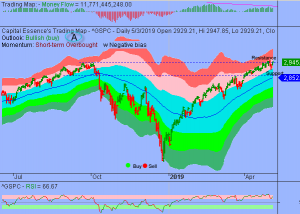 Good Morning, this is Capital Essence’s Market Outlook (the technical analysis of financial markets) for Monday May 6, 2019.

Stocks rose on Friday after data showed U.S. job creation was stronger than expected in April.  The Dow Jones Industrial Average rose 0.8 percent to 26,504.95, while the S&P added nearly 1 percent to 2,945.64. The Nasdaq Composite climbed 1.6 percent to 8,164.  The CBOE Volatility Index (VIX), widely considered the best gauge of fear in the market, fell more than 10 percent to close at 12.87.

Amazon (AMZN) rose 3.2 percent after Warren Buffet said Berkshire Hathaway (BRK.B) has been buying shares of the company. Its outperformance contributed to the leadership of the consumer discretionary sector.  As such, the Consumer Discretionary Select Sector SPDR ETF (XLY) rose 1.18 percent on the day and is up more than 21 percent YTD, outperformed the S&P by a wide margin.  Now the question is whether the rally has more legs?  Below is an update look at a trade in XLY. 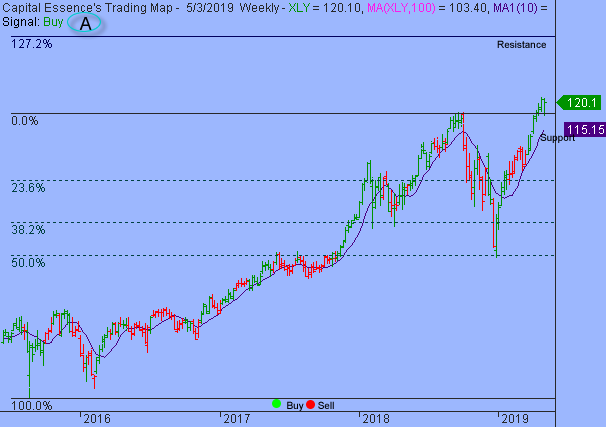 Our “U.S. Market Trading Map” painted XLY bars in green (buy) – see area ‘A’ in the chart.  The first dominant feature on the chart is the rising trend line starting in 2015.  The second dominant feature of the chart is the downward trend since 2018.  The late 2018 selloff found support near the 50% Fibonacci retracement, a key technical level based on Fibonacci levels.  The early 2019 rally pushed the ETF above the 2018 highs, signify a bullish reversal and upside breakout.

Over the past few weeks, XLY has been basing sideways using recent breakout point as support.  This is a positive development, suggesting that the ETF will break to new high as soon as it works off overbought conditions.

XLY has support near 115.  Short-term traders could use that level as the logical level to measure risk against. 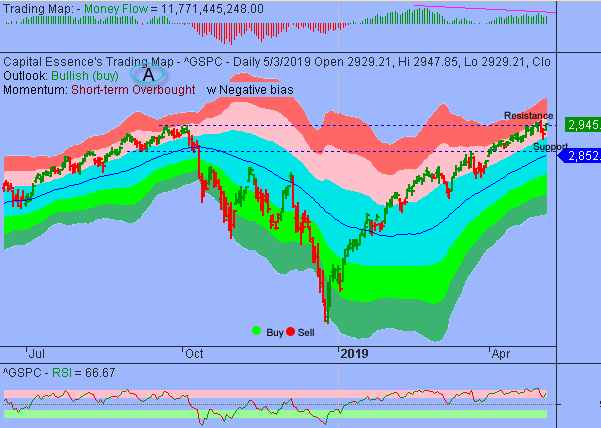 Short-term technical outlook shifted to bullish (buy).  Last changed May 3, 2019 from bearish (sell) (see area ‘A’ in the chart).

S&P rebounded nicely after recent pullback found support near the important sentiment 2900 mark.  That level roughly corresponds with the lower boundary of the pink band.  Friday’s rally pushed the index up against formidable resistance at the 2950 zone.  The index is now at a key juncture.  It is testing formidable resistance from below.  Technically speaking, while the trend line testing process was normal, upside momentum does not appeared strong enough to generate a decisive breakout.  Adding to concerns is the lagging Money Flow measure.  The indicator peaked in February and formed series of lower highs as prices ascending, suggesting less and less money are chasing the rally.  Technically speaking, this trading pattern exhibits characteristics of a distribution phase, the period in which smart money sell (distribute) their positions.  With this in mind, we’d look to reduce exposure into overbought strength which might take the index closer to 3000 before a significant pullback unfolds.

In summary, our works on price structure and momentum suggested strongly that the S&P is in an early stage of the distribution phase, the period in which smart money sell (distribute) their positions.  With this in mind, we’d look to reduce exposure into overbought strength which might take the index closer to 3000 before a significant pullback unfolds.