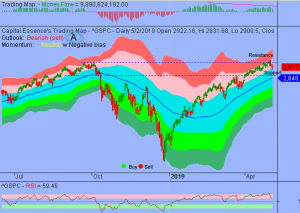 Good Morning, this is Capital Essence’s Market Outlook (the technical analysis of financial markets) for Friday May 3, 2019.

We’ve noted in the previous Market Outlook that: “Wednesday’s massive bearish engulfing bar suggested that suggested that S&P is at or very close to a significant short-term top. Near-term risk is to the downside.  Traders should consider buying downside protection on winning positions.”  As anticipated, S&P fell as much as 0.8 percent in early Thursday session before buyers stepped in and pushed prices off the intraday low.  For the day, the bench mark gauge fell 0.2 percent to 2,917.52, while the Nasdaq Composite fell 0.16 percent to 8,036.77.  The Dow Jones Industrial Average gave up 0.46 percent to 26307.79   The CBOE Volatility Index (VIX), widely considered the best gauge of fear in the market, fell more than 2 percent to close at 14.42.

Gold prices slumped to an over four-month low on Thursday, the day after the FOMC axed any hopes for a rate cut in the near term, subduing demand for the non-interest bearing bullion.  Spot gold was down 0.6 percent to $1,269 per ounce, after touching its lowest since end-December 2018 at $1,265.85 earlier in the session.  As such, the VanEck Vectors Gold Miners ETF (GDX) fell 1.71 percent on the day and is down more than 4 percent YTD, underperformed the S&P by a wide margin.  Now the question is whether this week selloff is a beginning of an end or there’re more pains ahead?  Below is an update look at a trade in GDX. 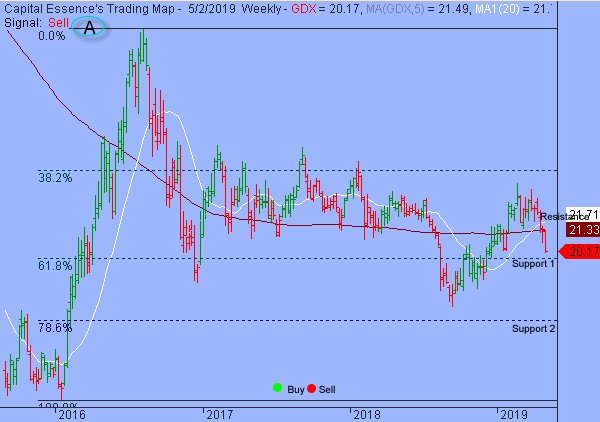 Our “U.S. Market Trading Map” painted GDX bars in red (sell) – see area ‘A’ in the chart.  Over the past few weeks, GDX has been trending lower after the September 2018 rally ran out of steam near the spring 2018 recovery high, just below the 38.2% Fibonacci retracement.  The early April selloff pushed the ETF below the 4-year moving average, a key technical level based on moving averages, signify a bearish breakout and downside reversal.  This week’s downside follow-through confirmed the bearish signal.  Right now, the most important thing to watch is trading behavior as the 17 zone is tested as support.  That level is significant in charting terms.  A close below that level will bring the 2016 low, near 12.40, back into view.

GDX has resistance near 21.70.  Short-term traders could use that level as the logical level to measure risk against. 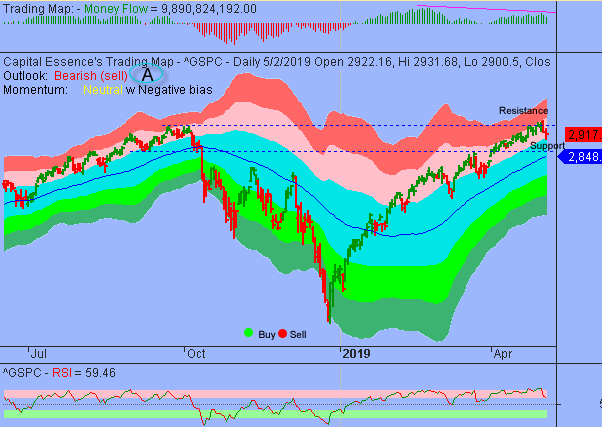 S&P moved down to test support at the lower boundary of the pink band after the March recovery rally ran out of steam near the 2950 zone.  Momentum indicator shifted lower from overbought zone, suggesting that market had finally reacted to overbought conditions. Money Flow measure is registering a weak bullish signal.  The indicator peaked in February and formed series of lower highs as prices ascending, suggesting less and less money are chasing the rally.  While more backing and filling would not be a surprise, if the S&P could hold above 2900 then a test of the important sentiment 3000 mark would be easier to be achieved.

In summary, recent trading actions suggested that market had finally reacted to overbought conditions.  While more backing and filling would not be a surprise, if the S&P could hold above 2900 then a test of the important sentiment 3000 mark would be easier to be achieved.  With that said, 2900 is the line in the sand.  A close below that level would see a massive pick up in volatility.