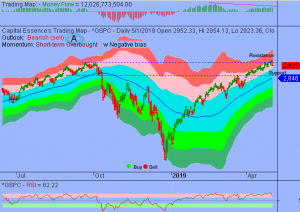 Good Morning, this is Capital Essence’s Market Outlook (the technical analysis of financial markets) for Thursday May 2, 2019.

We’ve noted in the previous Market Outlook that: “overbought conditions have returned on a daily basis but momentum remains supportive so downside risk could be limited. It is possible that S&P could continue to drift higher as trading sentiment remains strong.  As for strategy, traders should look to reducing exposure into overbought strength or at least buying downside protection for winning positions.”  As anticipated, S&P set new all-time high in early Wednesday session following report that a U.S.-China trade deal could be announced by next Friday.  The market however, gave back all of the early gains and some more to close lower after Fed Chair Jerome Powell dismissed the idea of a rate-cut to address low inflation.  For the day, the bench mark gauge fell 0.8 percent to 2,923.73.  The tech-heavy Nasdaq Composite declined 0.6 percent to 8,049.64. The Dow Jones Industrial Average percent gave up 0.6 to 26,430.14.  The CBOE Volatility Index (VIX), widely considered the best gauge of fear in the market, surged nearly 13 percent to close at 14.80.

Ten of the 11 S&P sectors finished lower, led by energy.  The weakness in the energy space was also driven by lower oil prices.  U.S. crude futures settled 31 cents lower at $63.60 per barrel after U.S. crude inventories soared more than expected to their highest since September 2017 as production hit a record high.  As such, the Energy Select Sector SPDR ETF (XLE) fell 2 percent on the day but is up 13 percent YTD, slightly underperform the S&P.  Now the question is whether recent pullback is a pause that refreshes or it’s a beginning of something worse?  Below is an update look at a trade in XLE. 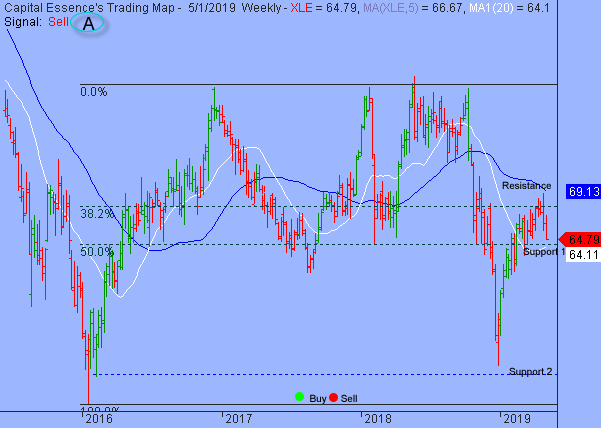 Our “U.S. Market Trading Map” painted XLE bars in red (sell) – see area ‘A’ in the chart.  Over the past few weeks, XLE has been trending lower in a short-term corrective mode after the early 2019 rally ran out of steam near the 1-year moving average, a key technical level based on moving averages.  Right now, the most important thing to watch is trading behavior as the 64 zone is tested as support.  That level is significant in charting terms.  A close below that level will confirm last week’s bearish signal and a retest of the late 2018 low, just above 53, should be expected.

XLE has resistance near 69.  Short-term traders could use that level as the logical level to measure risk against. 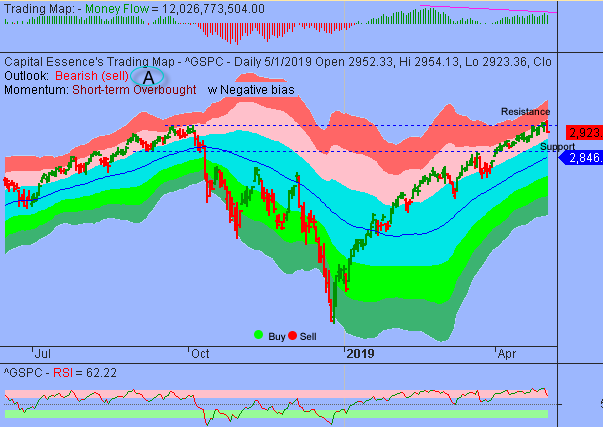 Short-term technical outlook shifted to bearish (sell).  Last changed May 1, 2019 from bullish (buy) (see area ‘A’ in the chart).

Once again, S&P sold off after the early rally attempt ran out of steam near the lower boundary of the red band.  In accordance to the Japanese candlestick pattern recognition, Wednesday’s massive bearish engulfing bar is a clear indication of buyers losing momentum.  Technically speaking, when this pattern formed after an upswing in the market, it can be an indication of a trend reversal.  Perhaps the lagging Money Flow measure, which peaked in February and printed series of lower highs as prices ascending, is the best illustration of the bears’ case.  Over the next few days, traders should monitor the retreat and rebound behaviors as the 2900 zone is tested as support.  A close below that level will confirm Wednesday’s bearish signal and has measured move to around 2846, or the trend channel moving average.

In summary, Wednesday’s massive bearish engulfing bar suggested that suggested that S&P is at or very close to a significant short-term top. Near-term risk is to the downside.  Traders should consider buying downside protection on winning positions.