Good Morning, this is Capital Essence’s Market Outlook (the technical analysis of financial markets) for Wednesday May 1, 2019.

We’ve noted in the previous Market Outlook that: “the current overbought situation together with the fact that the S&P is now facing a strong technical resistance does not call for an immediate break to the upside.  So it would not be surprising to see the market churns around current level.”  As anticipated, S&P closed slightly higher after being down as much as 0.6 percent following a key revenue miss from Alphabet.  For the day, the bench mark gauge added 0.1 percent to 2.945.83.  The tech-heavy Nasdaq Composite also hit an all-time high, fell 0.8 percent to 8,095.38. The Dow Jones Industrial Average percent added 0.2 to 26,592.91.  The CBOE Volatility Index (VIX), widely considered the best gauge of fear in the market, closed flat at 13.12.

Shares Google’s parent Alphabet tumbled 7.7 percent Tuesday as its revenue shortfall raised concerns about its ability to sustain strong growth amid increasing competition.  Its underperformance weighed on the Technology Select Sector SPDR ETF (XLK), rose 0.2 percent and is up 27 percent YTD, outperformed the S&P by a wide margin.  Now the question is whether the rally has more legs?  Below is an update look at a trade in XLK. 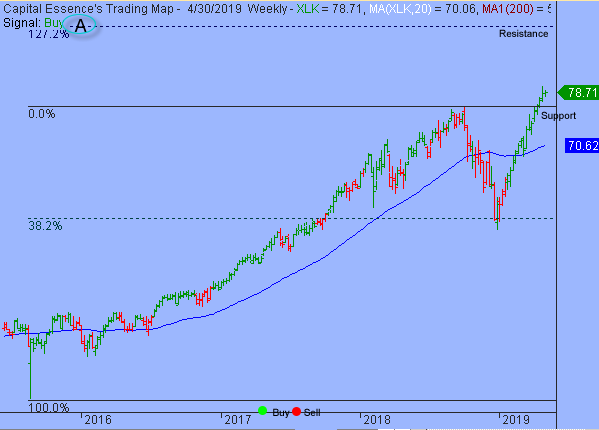 Our “U.S. Market Trading Map” painted XLK bars in green (buy) – see area ‘A’ in the chart.  The first dominant feature on the chart is the rising trend line starting in 2015.  The second dominant feature of the chart is the downward trend since 2018.  The late 2018 selloff found support near the 38.2% Fibonacci retracement, a key technical level based on Fibonacci levels.  The late 2018 rally pushed the ETF above the 2018 high, signify a bullish reversal and upside breakout.  Last week’s upside follow-through confirmed the bullish signal and opened up for a test of the more important resistance near the 88 zone, or the 127.2% Fibonacci extension.

XLK has support near 76.  Short-term traders could use that level as the logical level to measure risk against. 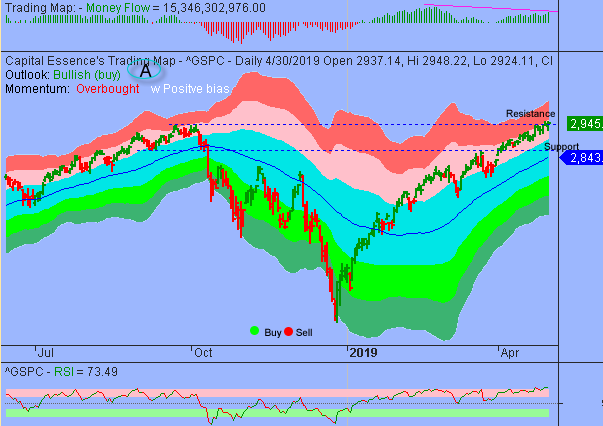 The S&P trades in broad trading bands that define the trend behavior. The upswing was very rapid with some short-term consolidation near each of the significant support or resistance levels. These support and resistance levels also define the limits and barriers to any future rally and uptrend development.

S&P continues drifting higher near the lower boundary of the red band after breaking out in early April.  Money Flow measure is flashing a weak bull signal.  The indicator peaked in February and formed series of lower highs as prices ascending, indicating less money’s chasing stocks higher.  Adding to concerns is the overbought conditions.  While overbought condition is normal during a pro-long uptrend, it’s suggested that upside momentum might not sustain without at least a short-term breather.  These elements might negatively affect trading sentiment over the coming days.  With this in mind we’d consider reducing exposure into overbought strength.

For now, 2900 is the line in the sand.  A close below that level will trigger another selloff with initial downside target between 2850.  The lower boundary of the red band, around 2950, represents key price level.  A close above that level could trigger acceleration toward 3000.

In summary, overbought conditions have returned on a daily basis but momentum remains supportive so downside risk could be limited. It is possible that S&P could continue to drift higher as trading sentiment remains strong.  As for strategy, traders should look to reducing exposure into overbought strength or at least buying downside protection for winning positions.