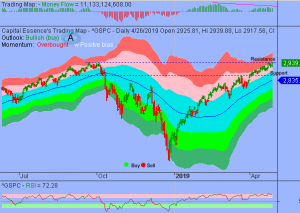 We’ve noted in the previous Market Outlook that: “recent trading actions leaving the S&P in what looks to us like an orderly high level back-and-forth consolidation of the March impressive rally.   There is a high probability that the upper and lower limit of a short-term trading range has been set between the 2940 and 2900 levels on the S&P.  While the near-term technical backdrops favors a break to the upside it will be important to monitor the retreat and rebound behaviors to determine whether breakouts are decisive.”  As anticipated, S&P traded lower in early Friday session amid weakness in energy and semiconductor stocks. The bench mark gauge traded as low as 2917 before buyers stepped in and pushed prices off the intraday low, up 0.5 percent to 2,939.88. The tech-heavy Nasdaq Composite ended the day up 0.3 percent at 8,146.40. The Dow Jones Industrial Average rose 0.3 percent to 26,543.33.  The CBOE Volatility Index (VIX), widely considered the best gauge of fear in the market, fell nearly 4 percent to 12.73.

Amazon (AMZN) shares closed 2.5 percent higher after results topped earnings expectations and announced that one-day shipping will be the new standard for Amazon Prime members. The results has helped offset Intel (INTC) disappointing guidance. Shares of INTC dropped 9 percent.  As such, the Technology Select Sector SPDR ETF (XLK) fell 0.38 percent on the day but is up nearly 27 percent YTD, outperformed the S&P by a wide margin.  Now the question is whether recent pullback is a pause that refreshes or it’s a beginning of something worse?  Below is an update look at a trade in XLK. 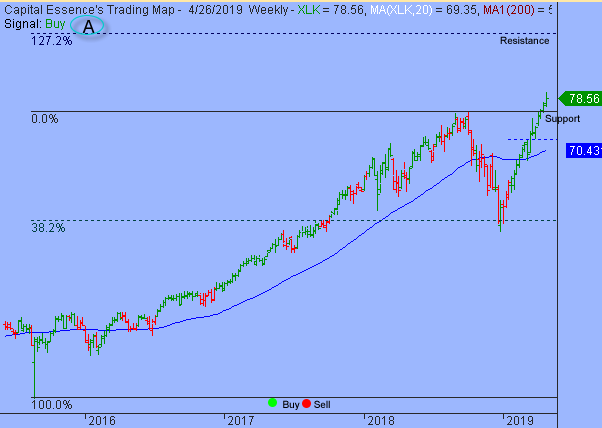 Our “U.S. Market Trading Map” painted XLK bars in green (buy) – see area ‘A’ in the chart.  The first dominant feature on the chart is the rising trend line starting in 2015.  The second dominant feature of the chart is the downward trend since 2018.  The late 2018 selloff found support near the 38.2% Fibonacci retracement, a key technical level based on Fibonacci levels.  The early 2019 rally pushed the ETF above the 2018 high, signify a bullish reversal and upside breakout.  Last week’s upside follow-through confirmed the bullish signal and opened up for a test of the more important resistance near the 127.2% Fibonacci extension, just above 88.

XLK has support near 76.  Short-term traders could use that level as the logical level to measure risk against. 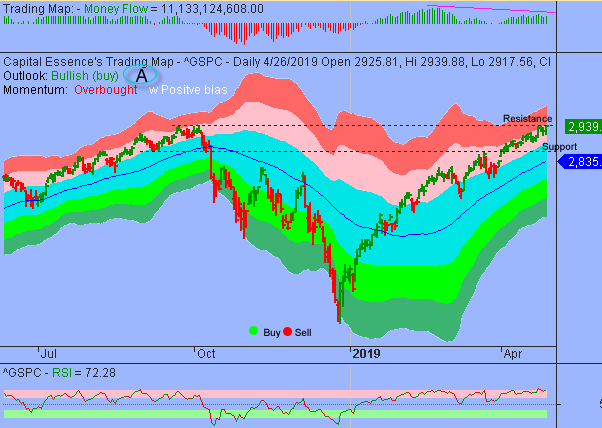 As expected, S&P rebounded nicely after recent pullback found support near Tuesday’s bullish breakout point.  With Friday’s gains, the index is up against the red band.  Technically speaking, a trade above that zone indicated extreme overbought conditions – a situation that often precursor to a meaningful correction.  Nevertheless, the fact that the S&P managed to hold on to most of recent gains despite overbought conditions is impressive.  This certainly would argue that the near-term risk remains to the upside.

For now, 2900 is the line in the sand.  A close below that level will trigger another selloff with initial downside target between 2896-2835.  The lower boundary of the red band, around 2940, represents key price level.  A close above that level could trigger acceleration toward 3000.

In summary, S&P could continue to drift higher as trading sentiment remains positive.  There is a high probability that overbought conditions can be sustained for a few days, potentially allowing for a test of the important sentiment 3000 mark before a significant pullback unfolds.