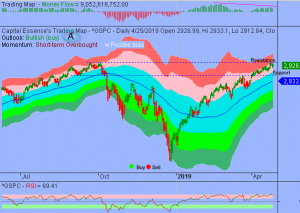 We’ve noted in the previous Market Outlook that: “S&P shifted to consolidation mode after the late March rally stalled at the lower boundary of the red band.  Market internal has weakened but downside momentum does not appeared strong enough to generate widespread breakdowns.  While seemingly vulnerable to some short-term weaknesses, the path with least resistance remains to the upside as long as the index holds above 2900.”  As anticipated, S&P dropped in early Thursday as sharp decline in 3M shares dragged the bench mark.  The broader market gauge however, managed to overcome and ended the day marginally lower at 2,926.17. The Dow Jones Industrial Average fell 0.5 percent to 26,462.08.  The Nasdaq Composite, meanwhile, rose 0.2% to 8,118.68 and hit an intraday record. The CBOE Volatility Index (VIX), widely considered the best gauge of fear in the market, rose nearly 2 percent to 13.25.

The Global X Social Media ETF (SOCL) opened sharply higher Thursday amid gains in Facebook (FB).  The ETF however, gave up all of the early gains and finished fractionally lower, slipped 0.03 percent on the day but is up nearly 23 percent YTD, outperformed the S&P by a wide margin.  Now the question is whether recent pullback is a pause that refreshes or it’s a beginning of something worse?  Below is an update look at a trade in SOCL. 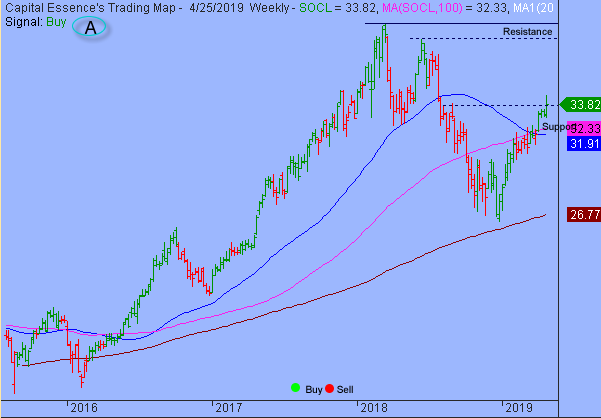 Our “U.S. Market Trading Map” painted SOCL bars in green (buy) – see area ‘A’ in the chart.  The first dominant feature on the chart is the rising trend line starting in 2015.  The second dominant feature of the chart is the downward trend since early 2018.  The late 2018 selloff found support near the 4-eayr moving average, a key technical level.  The early 2019 rally pushed the ETF above the massive 2-conjoining resistance, the 2-year and 1-year moving averages, signify a bullish reversal and upside breakout.

Over the past few weeks, SOCL has been basing sideways near the August 2018 recovery high as it works off overbought conditions.  This week’s rally pushed SOCL above the early April high, signify resumption of the 2019 upswing with upside target around 38-39, or the 2018 highs.

SOCL has support near 32.  Short-term traders could use that level as the logical level to measure risk against. 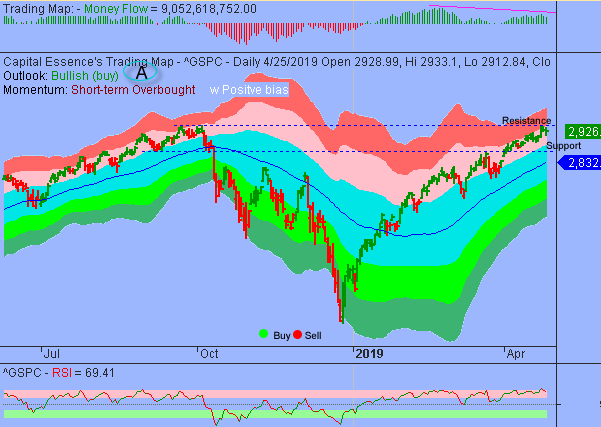 As expected, S&P moved down to test support at this week’s bullish breakout point, or the prior high set in mid-April, as market works off overbought conditions.  Market internal has weakened but downside momentum does not appeared strong enough to generate widespread breakdowns.

The index could signal an upward trajectory, depending on how it closes over the next few days.  For now, 2900 is the line in the sand.  A close below that level will trigger another selloff with initial downside target near 2832.  The lower boundary of the red band, around 2940, represents key price level.  A close above that level could trigger acceleration toward 3000.

In summary, recent trading actions leaving the S&P in what looks to us like an orderly high level back-and-forth consolidation of the March impressive rally.   There is a high probability that the upper and lower limit of a short-term trading range has been set between the 2940 and 2900 levels on the S&P.  While the near-term technical backdrops favors a break to the upside it will be important to monitor the retreat and rebound behaviors to determine whether breakouts are decisive.