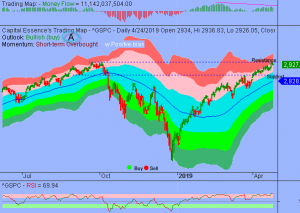 We’ve noted in the previous Market Outlook that: “return of overbought conditions as S&P moved up to test key technical level does not favor a sustain breakout.  On balance, we’re cautiously optimistic on stocks over the short-term and look to trim positions into overbought strength.”  As anticipated, S&P slipped from record levels on Wednesday as Wall Street digested a mixed batch of corporate earnings.  For the day, the bench mark gauge dipped 0.2 percent to 2,927.25.  The Dow Jones Industrial Average gave up 0.2 percent to close at 26,597.05. The Nasdaq Composite ended the day down 0.2 percent at 8,102.01 after hitting an intraday record. The CBOE Volatility Index (VIX), widely considered the best gauge of fear in the market, jumped more than 6 percent to 13.03.

Industrial sector finished slightly lower amid a mixed set of earnings reports, which included those from Boeing (BA), Caterpillar (CAT), Northrop Grumman (NOC), and Norfolk Southern (NSC).  As such, the Industrial Select Sector SPDR ETF (XLI) fell 0.3 percent on the day but is up nearly 22 percent YTD, outperformed the S&P by a wide margin.  Now the question is whether recent pullback is a pause that refreshes or it’s a beginning of something worse?  Below is an update look at a trade in XLI. 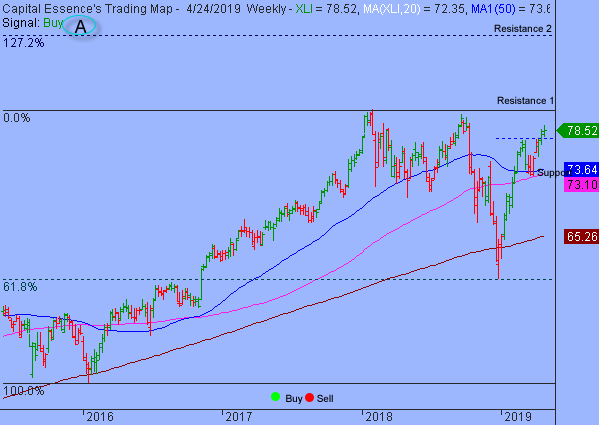 Our “U.S. Market Trading Map” painted XLI bars in green (buy) – see area ‘A’ in the chart.  XLI has been on a tear in recent months after the early March correction found support near the 2-year moving average, a key technical level.  The late March rally pushed the ETF above the early March high, signify a bullish reversal and upside breakout.  This week’s upside follow-through confirmed the bullish signal and setting the stage for a test of the more important resistance near the 81 zone, or the early 2018 high.  A close above it will trigger acceleration toward 90, or the 127.2% Fibonacci extension.

XLI has support near 73.  Short-term traders could use that level as the logical level to measure risk against. 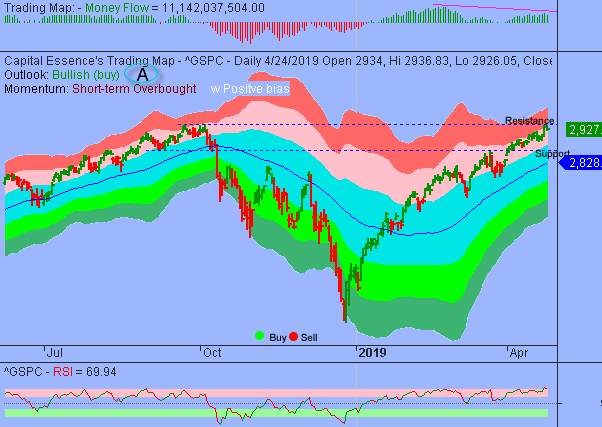 S&P pullback after recent rally ran into resistance at the lower boundary of the red band, the level that has been successfully repelling price actions in the past few months.  In accordance to the Japanese candlestick pattern recognition, Wednesday’s narrow range (or neutral) bar indicates uncertainty – traders refuse to press hard one way or the other just because they are not very sure about the near-term direction.  This explains why market often uses neutral bar to change direction.

Market internal has weakened but downside momentum does not appeared strong enough to generate widespread breakdowns.  So, it should not be surprising to see some backings and fillings in the coming days.

In summary, S&P shifted to consolidation mode after the late March rally stalled at the lower boundary of the red band.  Market internal has weakened but downside momentum does not appeared strong enough to generate widespread breakdowns.  While seemingly vulnerable to some short-term weaknesses, the path with least resistance remains to the upside as long as the index holds above 2900.