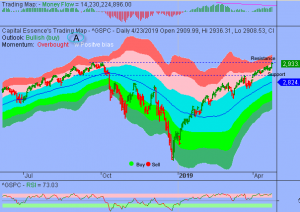 We’ve noted in the previous Market Outlook that: “the big picture remains the same. There is an orderly high level consolidation near S&P’s 2900, which represents digestion period.  There is a high probability that the S&P will break out from current trading range as soon as the market shakes off weak hands bulls.”  As anticipated, the S&P rallied on Tuesday to notch record closing high as Wall Street cheered stronger-than-expected quarterly profits from some of the largest publicly traded U.S. companies.  For the day, the bench mark gauge rose 0.9 percent to 2,933.68. The Nasdaq Composite closed up 1.3 percent at 8,120.82. The Dow Jones Industrial Average gained 0.6 percent to close at 26,656.39.  The CBOE Volatility Index (VIX), widely considered the best gauge of fear in the market, fell more than 1 percent to 12.28.

Homebuilders attracted strong buying support Tuesday following report that new home sales in March increased 4.5% m/m to a seasonally adjusted annual rate of 692,000, which was the strongest pace since November 2017. Lower prices and lower mortgage rates contributed to the pickup in sales activity.  As such, the SPDR S&P Homebuilders ETF (XHB) rose 1.13 percent on the day and is up nearly 27 percent YTD, outperformed the S&P by a wide margin.  Now the question is whether the rally has more legs?  Below is an update look at a trade in XHB. 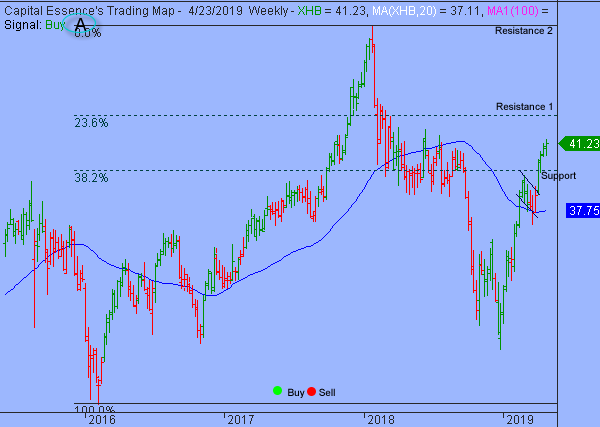 Our “U.S. Market Trading Map” painted XHB bars in green (buy) – see area ‘A’ in the chart.  XHB has been on a tear in recent months after the early March correction found support near the 1-year moving average, a key technical level.  The early April rally pushed the ETF above the March falling trend line, signify a bullish reversal and upside breakout.  This is a positive development, supporting further upside follow-through and a test of the more important resistance near the 43 zone, or the 23.6% Fibonacci retracement of the 2016-2018 upswing.  A close above it will trigger acceleration toward the 2018 highs, just above 47.

XHB has support near 40.  Short-term traders could use that level as the logical level to measure risk against. 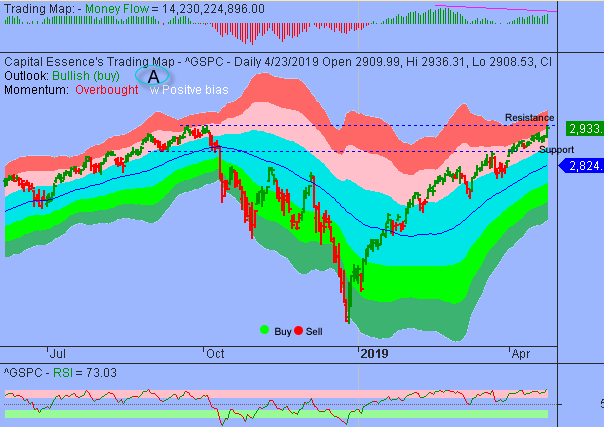 As expected, S&P moved up to test resistance at the late 2018 high after recent pullback found support near the important sentiment 2900 zone.  Tuesday’s rally pushed the index above the mid-April high of 2918, suggesting that the one-week sideways trading pattern had resolved itself into a new upswing.

Market internal has strengthened but upside momentum does not appear strong enough to generate widespread breakouts.  Money Flow measure is flashing a weak bullish signal as it diverged from price action since late March.  The S&P took out the February and March highs while the indicator set series of lower highs.  Additionally, the return of overbought conditions will give the bulls more pressure than they have already had.  With this in mind, we’d look to reduce exposure into overbought strength, which might take the S&P closer to 2950 before a significant pullback unfolds.

In summary, return of overbought conditions as S&P moved up to test key technical level does not favor a sustain breakout.  On balance, we’re cautiously optimistic on stocks over the short-term and look to trim positions into overbought strength.