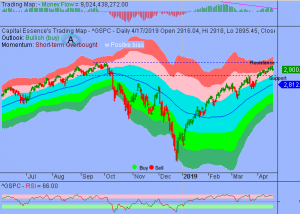 Stocks closed lower Wednesday as sharp losses in the health-care sector offset strong quarterly earnings results.  For the day, the S&P fell 0.2 percent to 2,900.45.  The Dow Jones Industrial Average finished flat at 26,449.54.  The Nasdaq Composite gave up 0.05 percent to close at 7,996.08.  The CBOE Volatility Index (VIX), widely considered the best gauge of fear in the market, rose more than 3 percent to 12.60.

Health care stocks continued to remain out of favor.  The sector’s sharp losses came after UnitedHealth CEO David Wichmann warned that proposals pushed by Democratic lawmakers, such as “Medicare for All,” would “surely jeopardize the relationship people have with their doctors, destabilize the nation’s health system and limit the ability of clinicians to practice medicine at their best.”  As such, the Health Care Select Sector SPDR ETF (XLV) fell 2.88 percent on the day and is down about 1 percent YTD, underperformed the S&P by a wide margin.  Now the question is whether this week selloff is a beginning of an end or there’re more pains ahead?  Below is an update look at a trade in XLV. 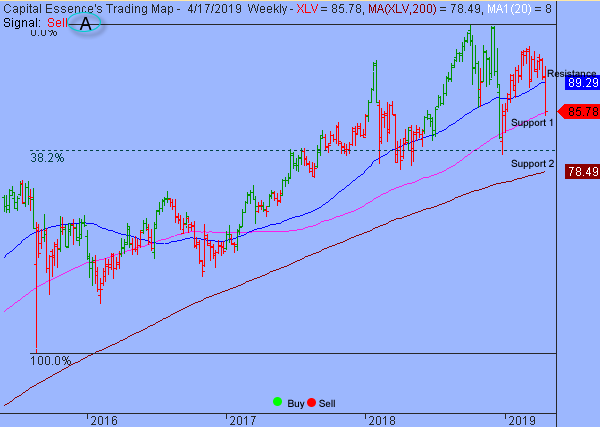 Our “U.S. Market Trading Map” painted XLV bars in red (sell) – see area ‘A’ in the chart.  XLV sold off sharply after falling below the 1-year moving average, a key technical level, on Tuesday.  The ETF is now testing support at the 2-year moving average following Wednesday’s massive selloff.  This level is significant in charting terms.  It was tested in late 2018.  A close below that level signify a bearish breakout and a retest of the more important support near the 80 zone should be expected.

XLV has resistance just above 89.  Short-term traders could use that level as the logical level to measure risk against. 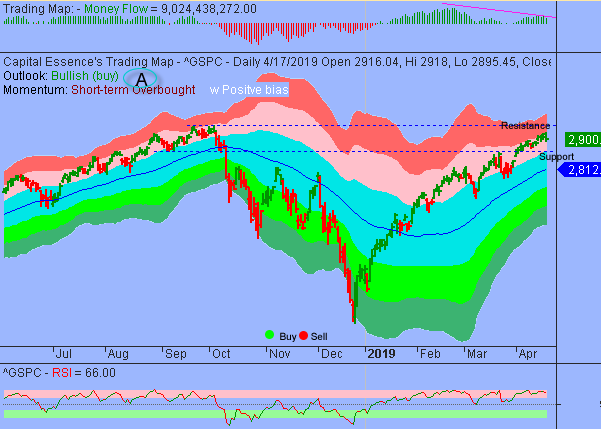 Once again, S&P sold off after early rally attempt ran into resistance at the lower boundary of the red band.  In accordance to the Japanese candlestick pattern recognition, Wednesday’s bearish outside reversal bar is a clear indication of supply overwhelming demand.  This pattern is often associated with key turning point particular when it formed near important price level.  Additionally, short-term momentum had shifted lower from near overbought level, suggesting that additional downside weakness likely. Right now follow-through is the key.  A close below 2900 will confirm the bearish signal and a test of the more important support near the 2890-2860 zone should be expected.  That area represents a major price support and if declines are seen below it, a massive new downswing in price will follow.  And we’re looking at 2800.

Longer term, market internal has weakened but downside momentum does not appear strong enough to generate major breakdowns.  Money Flow measure is flashing a weak bearish signal as it diverged from price action since late March.  The S&P took out the February and March highs while the indicator set a series of lower highs.  While more backing and filling would not be a surprise, a close below 2860 would see a massive pickup in volatility.

In summary, Wednesday’s outside reversal bar together with the fact that the S&P is facing strong technical resistance after rising more than 100 points since late March warns of potential trend shifts.  But the overall technical backdrop remains bullish, so we’d consider purchase stocks during declines in the market and stay bullish as long as the S&P holds above 2860.