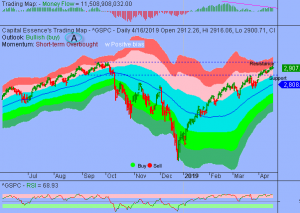 We’ve noted in the previous Market Outlook that: “an overbought pullback consolidation interrupted the March rally in the S&P.  Although seemingly vulnerable to further short-term weakness, the overall technical backdrop remains positive so sell-off could be shallow because the sideline money will try to fight its way back into the market.”  As anticipated, the S&P traded with modest gains throughout the day and briefly dipped into negative territory with 30 minutes left of trading where it found buying interest at the 2900 level.  For the day, the S&P added 0.05 percent to 2,907.06.  The Dow Jones Industrial Average rose 0.3 percent to 26,452.66.  The Nasdaq Composite added 0.3 percent to 8,000.23.  The CBOE Volatility Index (VIX), widely considered the best gauge of fear in the market, rose more than 2 percent to 12.32.

Semiconductor attracted strong buying support Tuesday.  The group received a boost following news that Apple (AAPL) and Qualcomm (QCOM) settled their royalty dispute for a currently undisclosed amount. Prior to the news, shares of Qualcomm were little changed and soared 23.2 percent after the news.  As such, the iShares PHLX Semiconductor ETF (SOXX) surged 3.2 percent on the day and is up more than 32 percent YTD, outperformed the S&P by a wide margin.  Now the question is whether the rally has more legs?  Below is an update look at a trade in SOXX.

Our “U.S. Market Trading Map” painted SOXX bars in green (buy) – see area ‘A’ in the chart.  SOXX has been on a tear in recent weeks after the early March correction tested and respected support at the 1-year moving average, a key technical level.  The late March rally pushed the ETF above the early 2018 high, signify a bullish reversal and upside breakout.  This week’s upside follow-through confirmed the early April breakout.  This is a positive development and opened up for a test of the 127.2% Fibonacci extension, around 230.

SOXX has support near 198.  Short-term traders could use that level as the logical level to measure risk against. 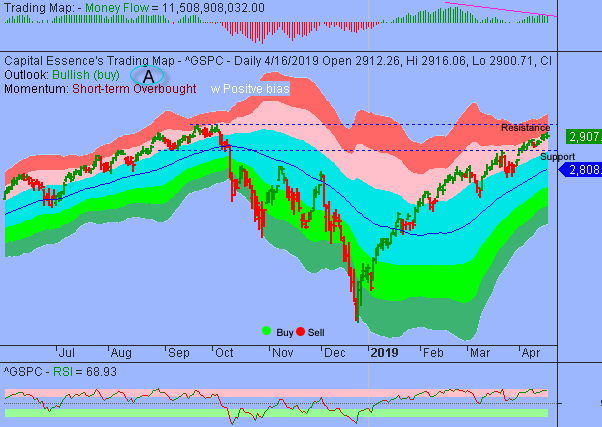 S&P continues drifting higher near the lower boundary of the red band.  Short-term momentum indicator reached extreme overbought zone, suggesting the market is a bit ahead of itself.  However, the fact that the S&P managed to hold on to most of recent gains despite short-term overbought condition is impressive.  This certainly would argue that the near-term risk remains to the upside.

Longer term, market internal has weakened but downside momentum does not appear strong enough to generate major breakdowns.  Money Flow measure is flashing a weak bearish signal as it diverged from price action since late March.  The S&P took out the February and March highs while the indicator set a series of lower highs.  While more backing and filling would not be a surprise, a close below 2860 would see a massive pickup in volatility.

In summary, the S&P could continue to drift higher amid the positive earning season influences.  So, it seems to us that the overbought conditions can be sustained for a few days, potentially allowing for a test of 2018 high of 2940 before a significant pullback unfolds.