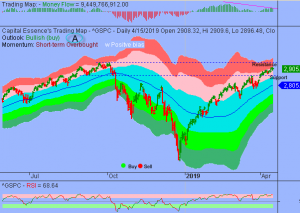 We’ve noted in the previous Market Outlook that: “S&P cleared key resistances, breaking above the 2900 level for the first time since early October 2018.  Consecutive close above 2900 would signify a breakout and supporting upside follow-through in the weeks ahead.  However, market is short-term overbought following recent advance. There could be a sell-off in the offing but it would be shallow if so.”  As anticipated, stocks closed slightly lower on Monday as investors digested mixed quarterly numbers from big banks like Goldman Sachs and Citigroup.  For the day, the S&P slipped 0.1 percent to 2,905.58.  The Dow Jones Industrial Average also fell 0.1 percent to 26,384.77.  The Nasdaq Composite ended the day down 0.1 percent to 7,976.01.  The CBOE Volatility Index (VIX), widely considered the best gauge of fear in the market, rose more than 2 percent to 12.32.

Financial stocks pulled back following another round of bank earnings.  Goldman Sachs (GS) and Citigroup (C) beat earnings expectations, but first quarter revenue for both companies declined on a year-over-year basis.  Goldman’s revenue also came in slightly below expectations, and the quality of its EPS beat was questioned due to lower tax and compensation rates.  As such, the Financial Select Sector SPDR ETF (XLF) fell 0.63 percent on the day but is up more than 13 percent YTD, slightly underperformed the S&P.  Now the question is whether recent pullback is a pause that refreshes or it’s a beginning of something worse?  Below is an update look at a trade in XLF. 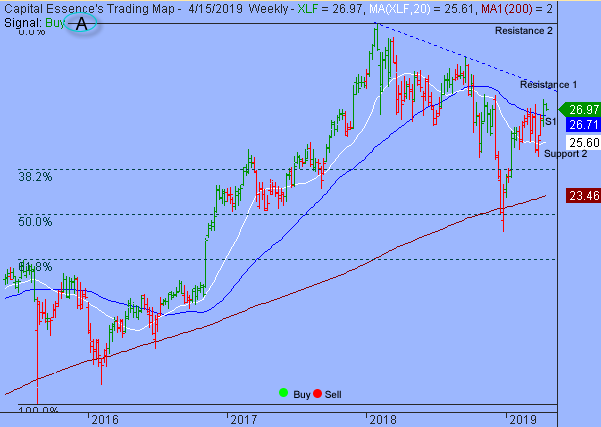 Our “U.S. Market Trading Map” painted XLE bars in green (buy) – see area ‘A’ in the chart.  XLE pulled back to test support at the 1-year moving average, a key technical level, after climbed above it last week.  A failure to hold above that level will invalidate the buy signal and trigger a down leg toward the high 25s zone.  Should the bulls manage to defend this support then a retest of the 2018 high would be easier to achieve.  Resistance stands in the way of continue rally is at the 2018 falling trend line, around 28.

XLF has support near 26.70.  Short-term traders could use that level as the logical level to measure risk against. 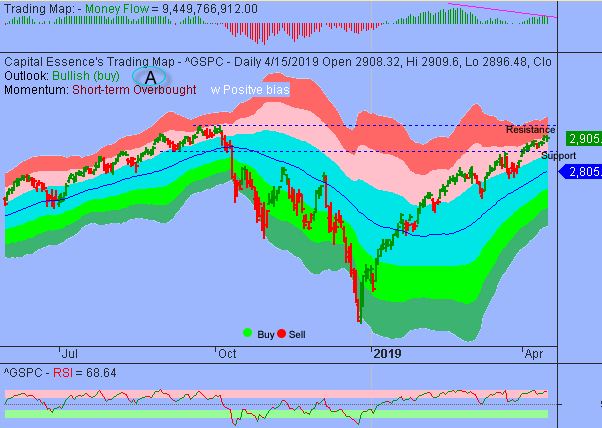 S&P retreated after an initial test of resistance at the lower boundary of the red band was met with a new wave of selling interest.  Nevertheless, the fact that the index manage to hold above the important sentiment 2900 mark is pretty impressive.

Market internal has weakened but downside momentum does not appear strong enough to generate major breakdowns.  Money Flow measure is flashing a weak bearish signal as it diverged from price action since late March.  The S&P took out the February and March highs while the indicator set a series of lower highs.  While more backing and filling would not be a surprise, a close below 2850 would see a massive pickup in volatility.

In summary, an overbought pullback consolidation interrupted the March rally in the S&P.  Although seemingly vulnerable to further short-term weakness, the overall technical backdrop remains positive so sell-off could be shallow because the sideline money will try to fight its way back into the market.