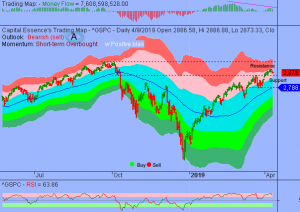 We’ve noted in the previous Market Outlook that: “S&P is in a holding pattern as traders wondered whether more gain is warranted given the massive advance over the past months. While market seems vulnerable to some downside retracement over the short-term, we’re long-term positive for S&P as we believe selloff would be shallow and quick.”  As anticipated, the S&P lost 0.6 percent on Tuesday as negative macroeconomic headlines triggered some broad-based profit taking.  The Dow Jones Industrial Average lost 0.7 percent and the Nasdaq Composite lost 0.6 percent.  The CBOE Volatility Index (VIX), widely considered the best gauge of fear in the market, jumped more than 8 percent to 14.28.

Bank stocks were particularly weak.  Bank of America, Goldman Sachs, J.P. Morgan and Morgan Stanley all fell at least 0.5 percent on Tuesday.  Bank of America announced it will increase its minimum wage to $17 per hour on May 1, followed by incremental increases to $20 per hour by 2021. The wage increase raised some concerns about other banks feeling pressured to do the same and its subsequent impact on their profit-margins.  As such, the SPDR S&P Bank ETF (KBE) fell 1.7 percent on the day but is up more than 15 percent YTD, slightly outperformed the S&P.  Now the question is whether recent pullback is a pause that refreshes or it’s a beginning of something worse?  Below is an update look at a trade in KBE. 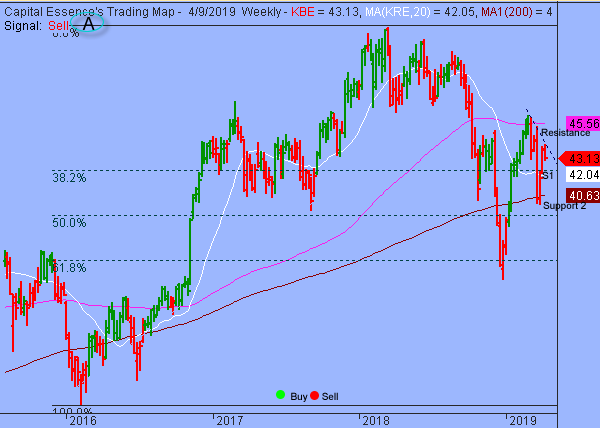 Our “U.S. Market Trading Map” painted KBE bars in red (sell) – see area ‘A’ in the chart.  KBE sold off after the late March oversold rally ran into resistance at the Mach falling trend line.  This is a negative development, suggesting the ETF might have to move to a much lower level of attract new buyer.  Right now the most important thing to watch is trading behaviors as the 42 zone, based on the 38.2% Fibonacci retracement, is tested as support.  A close below that level has measured move to 40.

KBE has resistance near 45.50.  Short-term traders could use that level as the logical level to measure risk against.

S&P sold off after the March recovery rally ran out of steam just below the important sentiment 2900 mark.  Momentum indicator shifted lower from overbought zone, suggesting that market had finally reacted to overbought conditions. Money Flow measure is registering a weak bullish signal.  The indicator peaked in February and formed series of lower highs as prices ascending, suggesting less and less money are chasing the rally.  While more backing and filling would not be a surprise, if the S&P could hold above 2840 then a move above 2900 would be easier to be achieved.

In summary, Tuesday trading action suggested that market had finally reacted to overbought conditions.  The fact that the March rally failed to climb above the important sentiment 2900 mark on the S&P suggested that long-term buying pressure has finally been exhausted. The stronger the resistance level, the more powerful the selloff.  This is the danger in the current market.