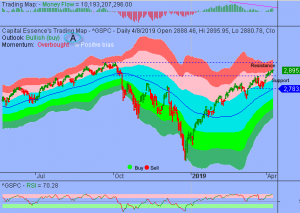 We’ve noted in the previous Market Outlook that: “although overbought condition is keeping buyers at bay, S&P’s 2900 continues to act as price magnet.  Short-term traders can anticipate increase short-term volatility with rapid up and down moves in the market.”  As anticipated, the S&P declined as much as 0.4 percent in the opening minutes of trading on Monday, weighed down by Boeing (BA) and General Electric (GE).  The benchmark index, however, staged a steady rebound throughout the day to extend its winning streak to eight straight sessions, up 0.1 percent to close at 2,895.77.  The Dow Jones Industrial Average lost 0.3 percent while the Nasdaq Composite added 0.2 percent.  The CBOE Volatility Index (VIX), widely considered the best gauge of fear in the market, rose nearly 3 percent to 13.18.

Shares of Boeing and General Electric led the decline. Boeing dropped more than 4 percent after Bank of America Merrill Lynch cut its rating on the aerospace giant to neutral from buy.  GE, meanwhile, fell more than 5 percent after J.P. Morgan downgraded the stock.  Their weakness was a huge drag on the industrial sector.  As such, the Industrial Select Sector SPDR ETF (XLI) fell 0.43 percent on the day but is up 19 percent YTD, outperformed the S&P.  Now the question is whether recent pullback is a pause that refreshes or it’s a beginning of something worse?  Below is an update look at a trade in XLI. 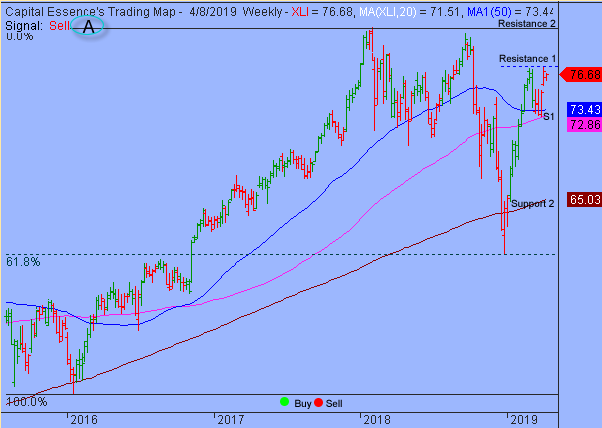 Our “U.S. Market Trading Map” painted XLI bars in red (sell) – see area ‘A’ in the chart.  Over the past few weeks, XLI has been basing sideways after the late March rally ran out of steam near the prior high set in early March.  Momentum has been deteriorated, suggesting that the ETF might have to move to a lower level to attract new buyers.  Support is strong near the 73 zone.  A close below that level will being the 65 zone, based on the 4-year moving average, into view.

XLI has resistance just above 77.  Short-term traders could use that level as the logical level to measure risk against. 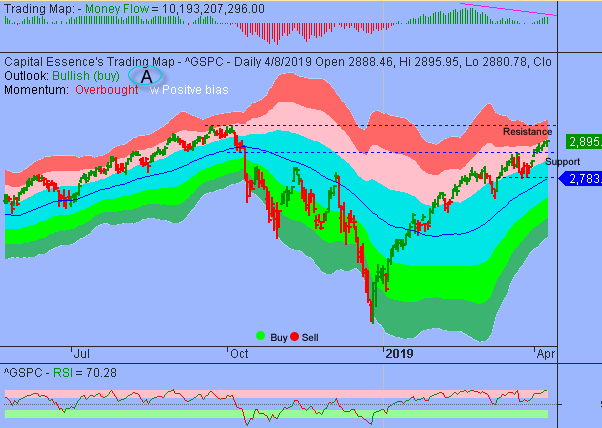 The big picture remains the same. The S&P continues drifting higher after breaking out above the early March high last week.  Momentum indicator is fast approaching the level that has been successful in repelling price actions over the past few months, suggesting market is due for some kind of a pullback the way we had in February and March.  Money Flow measure is registering a weak bullish signal.  The indicator peaked in February and formed series of lower highs as prices ascending, suggesting less and less money are chasing the rally.  While more backing and filling would not be a surprise, if the S&P could hold above 2860 then a move above 2900 would be easier to be sustained.

In summary, S&P is in a holding pattern as traders wondered whether more gain is warranted given the massive advance over the past months. While market seems vulnerable to some downside retracement over the short-term, we’re long-term positive for S&P as we believe selloff would be shallow and quick.