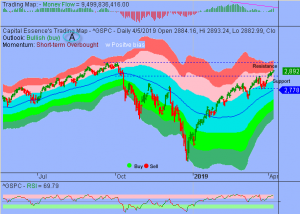 We’ve noted in the previous Market Outlook that: “overbought conditions have returned on a daily basis but momentum remains supportive so downside risk could be limited. It is possible that S&P could continue to drift higher as trading sentiment remains strong.  As for strategy, buying into short-term dips remains the most profitable strategy.”  As anticipated, the S&P gained 0.5 percent Friday in a broad-based advance that was supported by a Goldilocks Employment Situation Report for March.  The Dow Jones Industrial Average added 0.2 percent and Nasdaq Composite posted a 0.6 percent gain.  The CBOE Volatility Index (VIX), widely considered the best gauge of fear in the market, fell more than 5 percent to 12.82.

Progress on the U.S.-China trade front sent materials stocks higher.  The sector was the best-performing sector last week, rising 4.3 percent.  As such, the Global X Copper Miners ETF (COPX) rose 0.44 percent on the day and is up 25 percent YTD, outperformed the S&P by a wide margin.  Now the question is whether the rally has more legs?  Below is an update look at a trade in COPX. 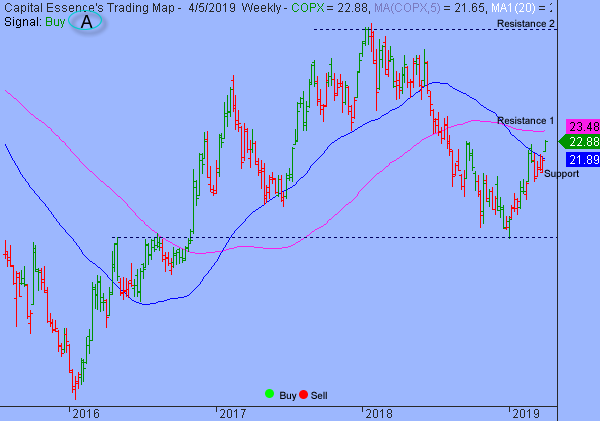 Our “U.S. Market Trading Map” painted COPX bars in green (buy) – see area ‘A’ in the chart.  Following the massive rally off the early 2019 low of 17.52, COPX has been coiled into a tight trading range as it worked off overbought conditions.  More often than not, coil or triangle formation tends to resolve in the direction of the existing trend, which is up in this case.  Last week’s rally had heled pushed the ETF above the 1-year moving average, a key technical level, suggesting that the March triangle pattern had resolved itself into a new upswing.  The most immediate resistance is near 23.50, or the 2-year moving average.  A close above that level will trigger acceleration toward the 2018 high, just above 29.

COPX has support near 22.  Short-term traders could use that level as the logical level to measure risk against. 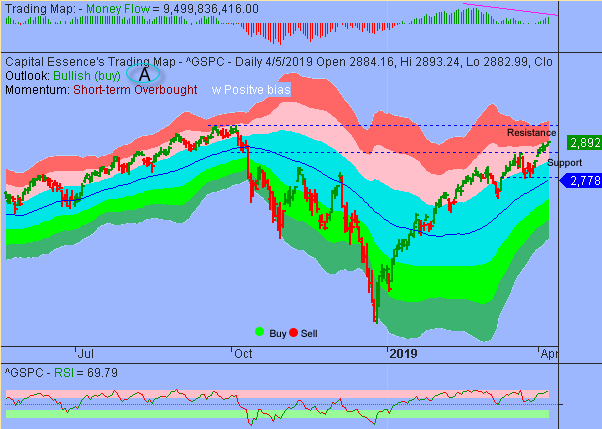 The big picture remains the same. The S&P continues drifting higher after breaking out above the early March high last week.  Momentum has strengthened but does not appear strong enough to generate widespread breakouts.  Money Flow measure is registering a weak bullish signal.  The indicator peaked in February and formed series of lower highs as prices ascending, suggesting less and less money are chasing the rally.  Adding to concerns is the return of overbought conditions on the daily chart.  These elements will give the bulls more pressures than they have already had.  While more backing and filling would not be a surprise, if the S&P could hold above 2860 then a move above 2900 would be easier to be sustained.

In summary, although overbought condition is keeping buyers at bay, S&P’s 2900 continues to act as price magnet.  Short-term traders can anticipate increase short-term volatility with rapid up and down moves in the market.