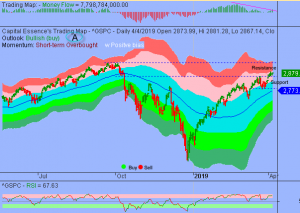 After wavering between small gains and losses for most of Thursday session as high-level trade talks continued in Washington, the S&P managed to close slightly higher, up 0.2 percent to 2,879.39.  The Nasdaq Composite posted a 0.1 percent loss and closed at 7,891.78.  The Dow Jones Industrial Average added 0.6 percent to 26,384.63.  The CBOE Volatility Index (VIX), widely considered the best gauge of fear in the market, fell more than 1 percent to 13.58.

Materials stocks attracted strong buying support Thursday amid optimism about a trade deal in anticipation of President Trump’s meeting with Chinese Vice Premier Liu He after the close.  As such, the Materials Select Sector SPDR ETF (XLB) rose 1.01 percent on the day and is up more than 14 percent YTD.  Now the question is whether the rally has more legs?  Below is an update look at a trade in XLB. 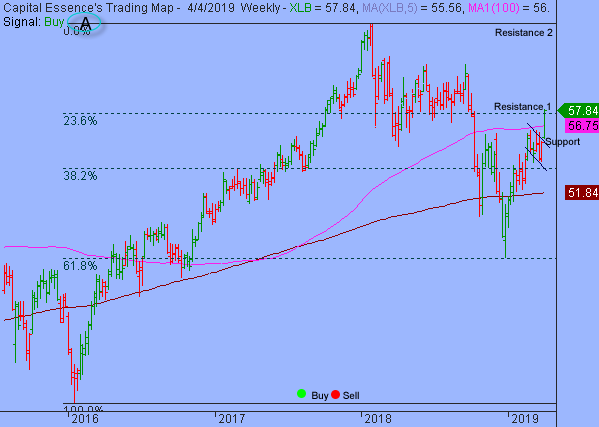 Our “U.S. Market Trading Map” painted XLB bars in green (buy) – see area ‘A’ in the chart.  The first dominant feature on the chart is the rising line starting in early 2016.  The second dominant feature of the chart is the downward trend since early 2018, which represented the digestion period.  The late 2018 selloff found support near the 61.8% Fibonacci retracement.  Over the past few weeks, XLB has been trending lower in a short-term corrective mode after the January rally ran out of steam near the 2-year moving average, a key technical level based on moving averages.  This week’s rally had helped pushed the ETF above the 2-year moving average, suggesting that the 5-week bullish flag pattern had resolved itself into a new upswing.  Right now the most important thing to watch is trading behaviors near the 58 zone, or the 23.6% Fibonacci retracement.  A close above that level would trigger acceleration toward the 2018 high, just above 64.

XLB has support near 55.  Short-term traders could use that level as the logical level to measure risk against. 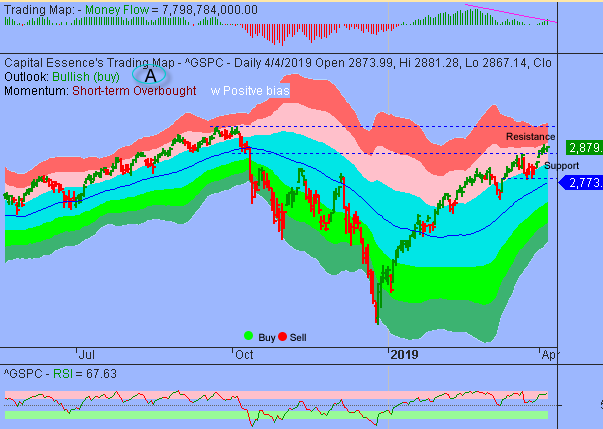 S&P continues drifting higher after breaking out above the early March high on Monday.  This week’s rally pushed the index up against the lower boundary of the red band.  As mentioned, the red zone indicated extreme overbought conditions – a situation that often precursor to a meaningful correction.  Nevertheless, momentum remains supportive over the short to medium term and Money Flow measure is above the zero line, indicating a positive net demand for stocks.  This certainly would argue that the path with least resistance remains to the upside.

In summary, overbought conditions have returned on a daily basis but momentum remains supportive so downside risk could be limited. It is possible that S&P could continue to drift higher as trading sentiment remains strong.  As for strategy, buying into short-term dips remains the most profitable strategy.