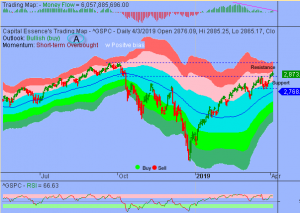 We’ve noted in the previous Market Outlook that: “there is an orderly consolidation, which represents digestion period.  While overbought condition is likely keeping buyers at bay, support is strong near 2800.  As for strategy, pullback will present a buying opportunity, while selling into strength may not be the best strategy in a market considered likely to bounce back.”  As anticipated, S&P traded higher in early Wednesday session amid optimism about a U.S.-China trade deal and positive PMI non-manufacturing data out of China and Europe. The benchmark index fell into negative territory in afternoon action, traded as low as 2865 before buyers stepped in and pushed prices off the intraday low.  For the day, the bench mark gauge gained 0.2 percent to end the day at 2,873.40. The Nasdaq Composite advanced 0.6 percent to 7,895.55.  The Dow Jones Industrial Average added 0.2 percent to 26,218.13.  The CBOE Volatility Index (VIX), widely considered the best gauge of fear in the market, rose nearly 3 percent to 13.74.

Shares of Advanced Micro Devices (AMD) surged 8.5 percent after Nomura Instinet initiated coverage of the stock with a buy rating, citing the company’s improving profitability.  The positive outlook led the iShares PHLX Semiconductor ETF (SOXX) higher, up 2.2 percent on the day and is up more than 26 percent YTD, outperformed the S&P.  Now the question is whether the rally has more legs?  Below is an update look at a trade in SOXX.

Our “U.S. Market Trading Map” painted XLV bars in red (sell) – see area ‘A’ in the chart.  The first dominant feature on the chart is the rising line starting in mid-2015.  The second dominant feature of the chart is the downward trend since early 2018, which represented the digestion period.  The late 2018 selloff found support near the 38.2% Fibonacci retracement.  The early 2019 rally has helped propel the ETF above the early 2018 high, signify a bullish breakout and upside reversal.  A close above 199 on a weekly basis would confirm this and trigger acceleration toward the 127.2% Fibonacci extension, near 230.

SOXX has support near 183.  Short-term traders could use that level as the logical level to measure risk against. 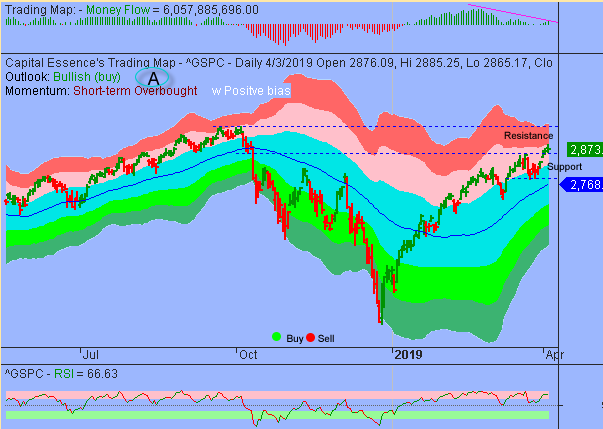 This week rally pushed the index up against the 2880 zone.  That level was significant when S&P fell below it in early October.  In accordance to the Japanese candlestick pattern recognition, Wednesday’s narrow range (or neutral) bar indicates uncertainty – traders refuse to press hard one way or the other just because they are not very sure about the near-term direction.  This explains why market often uses neutral bar to change direction.  Perhaps, the lagging Money Flow measure is the best illustration of the bears’ case.  Momentum has been strengthened but does not appeared strong enough to generate widespread breakouts.  These elements suggested that S&P is vulnerable to some downside retracement over the short-to-intermediate term.

In summary, the spinning top candlestick pattern in the S&P together with overbought conditions suggested that market is at or very close to a significant near-term top. Near-term risk is to the downside.  Traders should consider buying downside protection on winning positions.