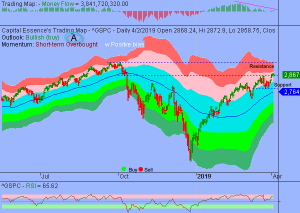 We’ve noted in the previous Market Outlook that: “our work on price pattern and momentum suggested that S&P could be in an early stage of a distribution phase, in which overall sentiment continues to be optimistic, with expectations of higher market levels.  On balance, we remain positive on stocks over the short to medium-term.”  As anticipated, stocks traded lower in early Tuesday session as traders digested Monday’s impressive gains.  The S&P traded as low as 2858 before buyers stepped in and pushed prices off the intraday low.  For the day, the bench mark gauge ended just above the flatline at 2,867.24, while the Nasdaq Composite gained 0.25 percent to close at 7,848.69.  The Dow Jones Industrial Average fell 0.3 percent to 26,179.13.  The CBOE Volatility Index (VIX), widely considered the best gauge of fear in the market, fell less than 1 percent to 13.36.

Shares of Walgreens Boots Alliance (WBA) fell 12.8 percent on weaker-than-expected earnings. Walgreens also lowered its earnings forecast for 2019. Tuesday’s session was the stock’s worst since August 6, 2014, when it fell 14.3 percent.  Its negative outlook undercut the health care sector. As such, the Health Care Select Sector SPDR ETF (XLV) fell 0.23 percent on the day but is up 6 percent YTD, underperformed the S&P.  Now the question is whether recent pullback is a pause that refreshes or it’s a beginning of something worse?  Below is an update look at a trade in XLV. 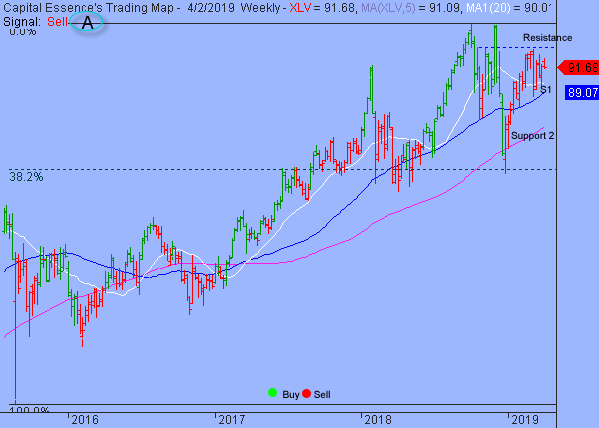 Our “U.S. Market Trading Map” painted XLV bars in red (sell) – see area ‘A’ in the chart.  Over the past few weeks, XLV has been basing sideways using the 20-week moving average as support after the late 2018 rally ran out of steam near the November recovery high.  Right now the most important thing to watch is trading behaviors as the 90 zone is tested as support.  A close below that level signify a bearish breakout and downside reversal and a retest of the more important support at the 85 zone should be expected.

XLV has resistance near 93.50.  Short-term traders could use that level as the logical level to measure risk against. 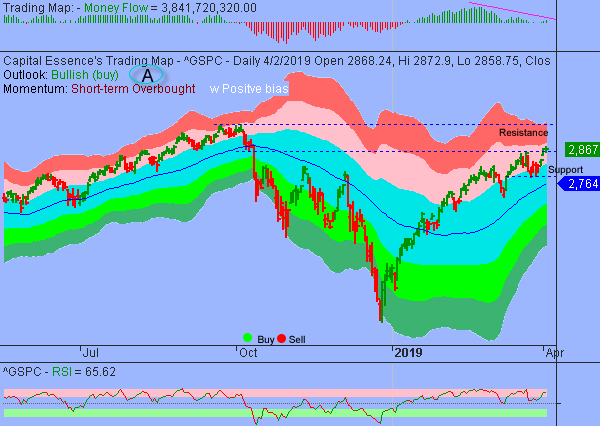 The S&P basing sideways using the early March high after climbed above that level on Monday.  Momentum has been strengthened but the return of overbought conditions on an intraday basis suggested that upside gains could be limited.  Money Flow measure hovers near the zero line, indicating a lack of commitment.  These elements increased the probability of further backing and fillings.

In a longer term, the overall technical backdrop remains positive.  If the S&P could hold above 2800 then a move to the all-time high set in September 2018, around 2940, would be easier to achieve.

In summary, there is an orderly consolidation, which represents digestion period.  While overbought condition is likely keeping buyers at bay, support is strong near 2800.  As for strategy, pullback will present a buying opportunity, while selling into strength may not be the best strategy in a market considered likely to bounce back.