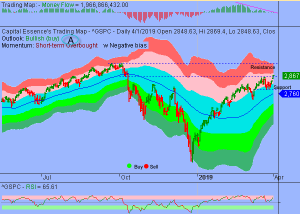 We’ve noted in the previous Market Outlook that: “S&P broke above the late March falling trend line, signify an upside reversal and bullish breakout.  Nevertheless, the return of overbought conditions on an intraday basis will put a cap on the upside.  As for strategy, traders should consider taking down exposure into overbought strength, which might take the S&P closer to 2860 before a significant pullback unfolds.”  As anticipated, stocks jumped on Monday as strong manufacturing data out of the U.S. and China eased worries of a possible global economic slowdown.  The S&P climbed 1.2 percent to 2,867.19.  The Dow Jones Industrial Average rose 1.3 percent to 26,258.42.  The Nasdaq Composite closed 1.3 percent higher at 7,828.91.  The CBOE Volatility Index (VIX), widely considered the best gauge of fear in the market, fell more than 2 percent to 13.40.

The iShares PHLX Semiconductor ETF (SOXX) outperformed, jumped 2.50 percent on the day and is up nearly 24 percent YTD, amid optimism toward the semiconductor space.  Now the question is whether the rally has more legs?  Below is an update look at a trade in SOXX.

Our “U.S. Market Trading Map” painted SOXX bars in green (buy) – see area ‘A’ in the chart.  Over the past few weeks, SOXX has been trending lower in a short-term corrective mode after the March rally ran out of steam near the early 2018 highs.  The correction found support near the 2018 falling trend line.  This week’s upside follow-through confirmed last week’s bullish reversal signal and opened up for a retest of the 2018 high, near 199.  A close above that level has measured move to 230, or the 127.2% Fibonacci extension of the 2015 to 2018 upswing.

SOXX has support near 183.  Short-term traders could use that level as the logical level to measure risk against. 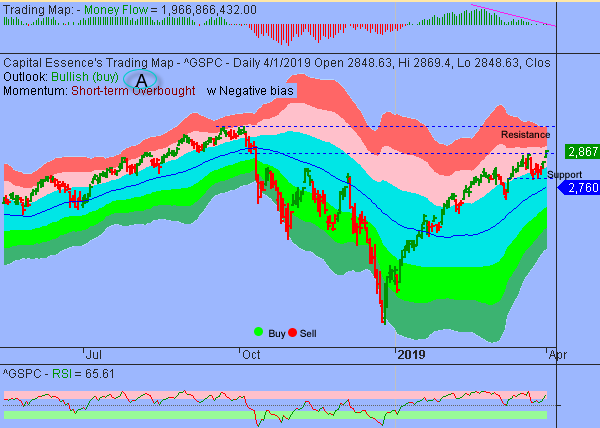 As expected, S&P climbed up above the early March high after recent pullback found support just below the lower boundary of the pink band.  Monday’s rally pushed the index above 2860, clearing an import hurdle, signify an upside reversal and bullish breakout.  Momentum has been strengthened but the return of overbought conditions on an intraday basis suggested that upside gains could be limited.  Adding to concerns is the lagging Money Flow measure.  The indicator did not confirm recent breakout as it hovers near the zero line, indicating a lack of commitment.  Technically speaking, recent trading pattern exhibits characteristics of a distribution phase, the period in which smart money sell (distribute) their positions.  In this phase, overall sentiment continues to be optimistic, with expectations of higher market levels. It is also the phase in which there is continued buying by the last of the investors in the market, especially those who missed the big move but are hoping for a similar one in the near future.  So we’d be cautious of taking large position at this stage of a rally.

In summary, our work on price pattern and momentum suggested that S&P could be in an early stage of a distribution phase, in which overall sentiment continues to be optimistic, with expectations of higher market levels.  On balance, we remain positive on stocks over the short to medium-term.