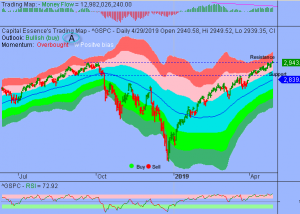 We’ve noted in the previous Market Outlook that: “S&P could continue to drift higher as trading sentiment remains positive.  There is a high probability that overbought conditions can be sustained for a few days, potentially allowing for a test of the important sentiment 3000 mark before a significant pullback unfolds.”  As anticipated, S&P set new closing, and intraday, records in a tight-ranged session Monday, up 0.1 percent to 2,943.03.  The tech-heavy Nasdaq Composite also hit an all-time high, rising 0.2 percent to 8,161.85. The Dow Jones Industrial Average percent added 0.04 to 26,554.39.  The CBOE Volatility Index (VIX), widely considered the best gauge of fear in the market, rose 3 percent to 13.11.

Financial stocks benefited from an increase in U.S. Treasury yields.  The 2-year yield and the 10-year yield increased three basis points each to 2.30 percent and 2.54 percent, respectively.  As such, the Financial Select Sector SPDR ETF (XLF) rose 1.01 percent on the day but is up more than 17 percent YTD, in line with the S&P.  Now the question is whether the rally has more legs?  Below is an update look at a trade in XLF. 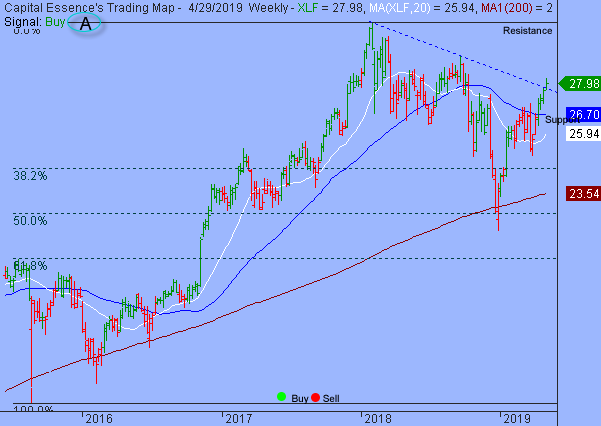 Our “U.S. Market Trading Map” painted XLF bars in green (buy) – see area ‘A’ in the chart.  The first dominant feature on the chart is the rising trend line starting in 2015.  The second dominant feature of the chart is the downward trend since 2018.  The late 2018 selloff found support near the 4-year moving average, a key technical level based on moving averages.  The late March rally pushed the ETF above the 2018 falling trend line, signify a bullish reversal and upside breakout.  Right now follow-through is the key.  A close above 28 on a weekly basis will confirm the bullish signal and a retest of the 2018 high, just above 30, should be expected.

XLF has support near 27.  Short-term traders could use that level as the logical level to measure risk against. 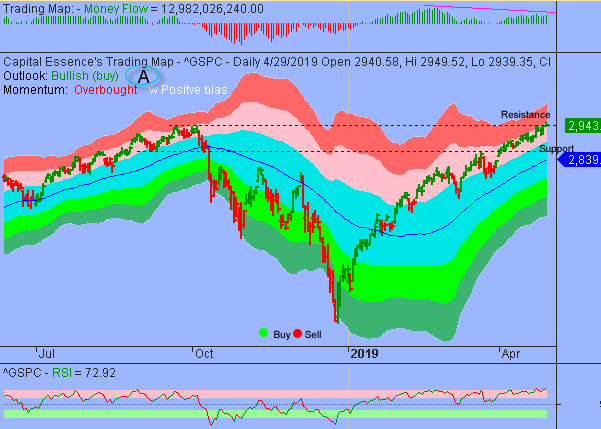 As expected, S&P rallied directly into key resistance at the lower boundary of the red band, near the 2950 area.  As mentioned, a trade above the lower boundary of the red band indicated extreme overbought conditions – a situation that often precursor to a meaningful correction.  Adding to concerns in the negative divergence on Money Flow measure, which peaked in February and formed series of lower highs as prices ascending.  And those are something that favors a short-term breather.

For now, 2900 is the line in the sand.  A close below that level will trigger another selloff with initial downside target between 2840.  The lower boundary of the red band, around 2950, represents key price level.  A close above that level could trigger acceleration toward 3000.

In summary, the current overbought situation together with the fact that the S&P is now facing a strong technical resistance does not call for an immediate break to the upside.  So it would not be surprising to see the market churns around current level.