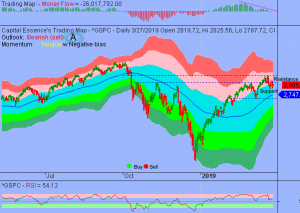 We’ve noted in the previous Market Outlook that: “recent trading behavior in the S&P constrained by a short-term sideways pattern and shown little evidence of a sustainable change in trend.  2800 is the line in the sand.  A failure to hold above that level would trigger a new downswing and an unwelcome pickup in downside volatility but for now it looks firm.”  As anticipated, S&P down as much as 1.1 percent in early Wednesday session amid ongoing concerns about slowing growth.  The broader market spent the bulk of afternoon action in a steady rebound as Treasuries cooled off.  For the day, the bench mark gauge declined 0.5 percent to 2,805.37. The Nasdaq Composite closed 0.6 percent lower at 7,643.38.  The Dow Jones Industrial Average lost 0.1 percent to 25,625.59.  The CBOE Volatility Index (VIX), widely considered the best gauge of fear in the market, rose more than 3 percent to 15.15.

The benchmark 10-year rate traded at 2.386 percent and hit its lowest level since December 15, 2017.   The lower yields, though, appear to be helping the U.S. housing market. KB Home (KBH) and Lennar (LEN) jumped 2.7 percent and 3.9 percent respectively after the homebuilders provided investors with an upbeat outlook for the sector that overshadowed underwhelming earnings results.  As such, the SPDR S&P Homebuilders ETF (XHB) rose 0.97 percent on the day and is up more than 18 percent YTD, outperformed the S&P by a wide margin.  Now the question is whether the rally has more legs?  Below is an update look at a trade in XHB. 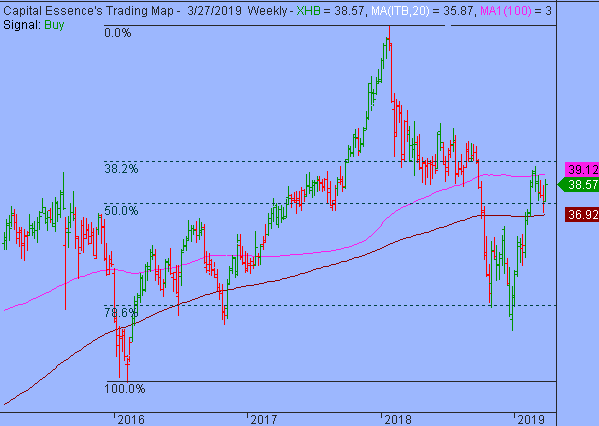 Our “U.S. Market Trading Map” painted XHB bars in green (buy) – see area ‘A’ in the chart.  Over the past few weeks. XHB has been trending lower in a short-term corrective mode after the late 2018 rally ran out of steam near the 38.2% Fibonacci retracement.  The correction tested and respected support at the 4-year moving average, a key technical level based on moving averages.  This week’s rally pushed the ETF above prior week’s high, signify a bullish reversal and upside breakout.  Right now, the most important thing to watch is trading behavior near the 40 zone.  A close above that level suggests that the 2-monht bullish flag pattern has resolved itself into a new upswing and opens the door for a retest of the 2018 high, around 47.

XHB has support near 37.  Short-term traders could use that level as the logical level to measure risk against. 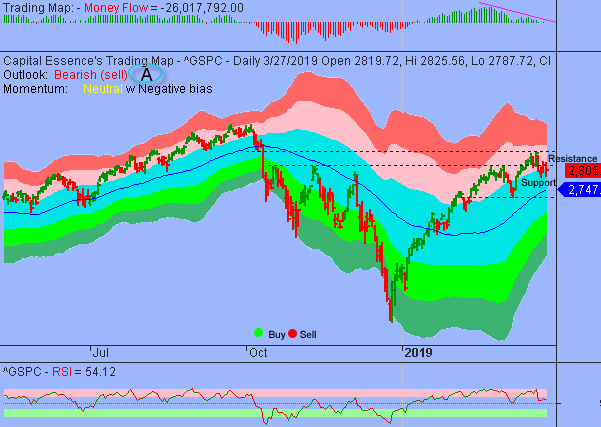 Once again, S&P moved down to test support at the important sentiment 2800 mark after the early rally attempt ran out of steam near 2825.  Near-term picture remains the same.  There is a consolidation within the 2800 and 2860 trading range, which represents digestion period in the after math of the early March rally.

Money Flow measure whipsaws around the zero line, indicating a lack of commitment.  Market internal has been deteriorated but downside momentum does not appeared strong enough to generate widespread breakouts.  So it should not be surprising to see further backings and fillings in the coming days.  Last week’s pivot high of 2860 marks an inflection point.  A close above that level signify resumption of the multi-month rally and trigger acceleration toward 2900.  As for support, 2800 is the line in the sand.  We’d turn particular bearish if the index closes twice below that level.

In summary, after the early March massive rally, stocks digested their gains in a consolidation phase that is giving way to a pullback in the S&P.  Support is strong in the 2800 area.  We’d turn particular bearish if the index closes twice below that level.