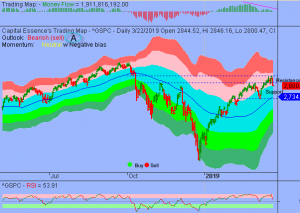 Major indices fell nearly 2 percent Friday as weak manufacturing data out of Europe added to worries about the pace of global economic activity.  The Dow Jones Industrial Average lost 1.8 percent to 25,502.32.  The S&P fell 1.9 percent to 2,800.71. The Nasdaq Composite declined 2.5 percent to 7,642.67.  The CBOE Volatility Index (VIX), widely considered the best gauge of fear in the market, soared more than 20 percent to 16.48.

Bank stocks were under tremendous selling pressure Friday as the spread between the 3-month yield and the 10-yr yield briefly inverted for the first since 2007.  An inverted yield curve occurs when short-term rates surpass their longer-term counterparts, putting a damper bank lending profits. An inverted curve is also considered a recession indicator.  As such, the Financial Select Sector SPDR ETF (XLF) tumbled 2.76 percent on the day but is up more than 6 percent YTD, underperformed the S&P.  Now the question is whether recent selloff is a pause that refreshes or it’s a beginning of something worse?  Below is an update look at a trade in XLF. 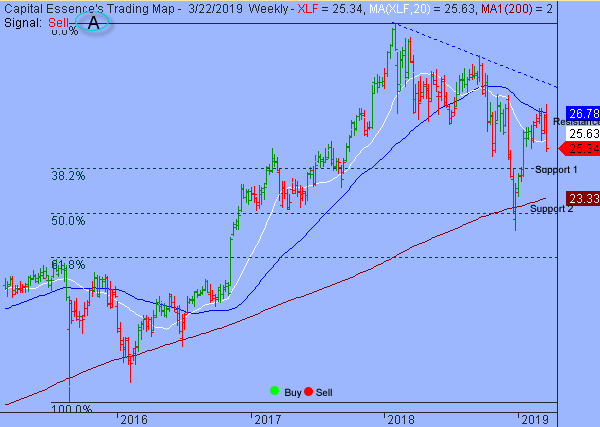 Our “U.S. Market Trading Map” painted XLF bars in red (sell) – see area ‘A’ in the chart.  Over the past few weeks. XLF has been basing sideways using the 20-week moving average as support after the late December rally ran out of steam near the 1-year moving average, a key technical level based on moving averages.  Last week’s selloff pushed the ETF below the 20-week moving average and the early March low, signify a bearish breakout.  This is a negative development, increased the probability for a retest of the more important support near the 24.50-23 zone, or the 38.2% Fibonacci retracement and 4-year moving average.  A close below 42 this week will confirm this.

XLF has resistance near 26.80.  Short-term traders could use that level as the logical level to measure risk against. 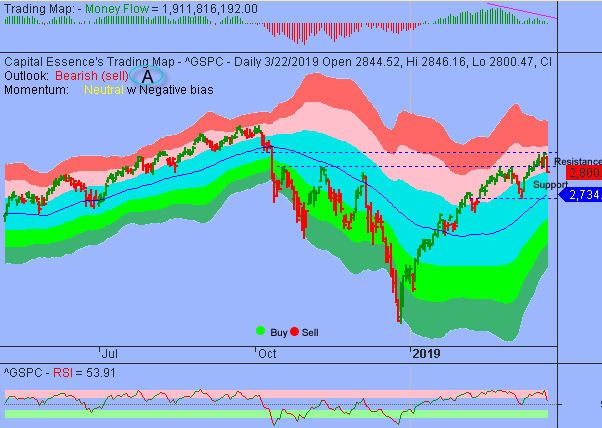 Once again, the S&P sold off after Thursday’s rally attempt ran out of steam near the October 2018 breakdown point, a key technical level.  As mentioned, last week’s high made a bearish divergence as price made a higher high and Money Flow measure a lower high, suggesting hot money is leaving the bullish bandwagon.  Friday selloff pushed the index below the lower boundary of the pink band and the late 2018 and the early March recovery highs, signify a bearish breakout and downside reversal.  Over the next few days, the most important thing to watch is the retreat and rebound behaviors as the psychological support, 2800 mark, is tested.  A close below that level has measured move to around 2750-2734.

In summary, S&P broke several supports last week.  When key supports broke it means that long-term buying pressure has finally been exhausted.  The stronger the support level, the more powerful the selloff.  Nevertheless, support is strong near the 2800-2750 zone.  This could help minimize downside follow-through and widespread breakdowns.