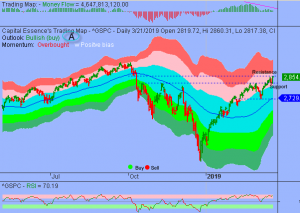 Stocks closed higher Thursday, bolstered by the notion of a dovish Fed and persistently low U.S. Treasury yields.  The Dow Jones Industrial Average rose 0.8 percent to 25,962.51. The S&P closed 1.1 percent higher at 2,854.88 while the Nasdaq Composite outperformed, rising 1.4 percent to 7,838.96.  The CBOE Volatility Index (VIX), widely considered the best gauge of fear in the market, fell 2 percent to 13.63.

Treasury yields fell sharply on Wednesday, with the benchmark 10-year rate hitting its lowest level in a year. The yield traded at 2.53 percent on Thursday while the short-term 2-year rate held at 2.41 percent.  The move sent the SPDR S&P Bank ETF (KBE) down 1.03 percent on the day but is up nearly 13 percent YTD, slightly underperformed the S&P.  Now the question is whether recent selloff is a pause that refreshes or it’s a beginning of something worse?  Below is an update look at a trade in KBE. 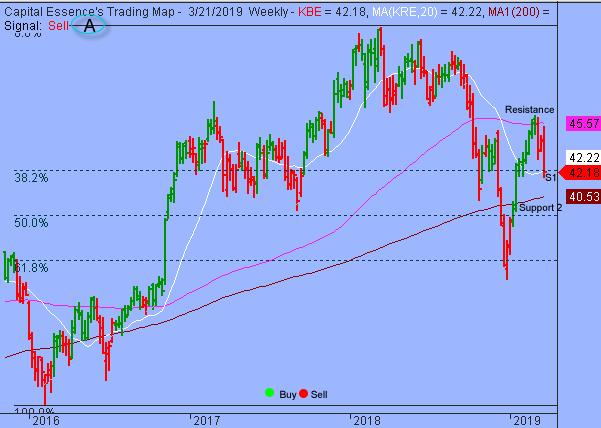 Our “U.S. Market Trading Map” painted KBE bars in red (sell) – see area ‘A’ in the chart.  Over the past few weeks. KBE has been trending lower in a short-term corrective mode after the late December rally ran out of steam near the 2-year moving average, a key technical level based on moving averages.  This week’s selloff pushed the ETF below the 38.2% Fibonacci retracement of the 2016-2018 upswing.  That level was significant when KBE climbed above it in January.  This is a bearish development, increased the probability for a retest of the more important support near the 40 zone, or the 4-year moving average and the 50% Fibonacci retracement.  A close below 42 this week will confirm this.

KBE has resistance near 45.50.  Short-term traders could use that level as the logical level to measure risk against. 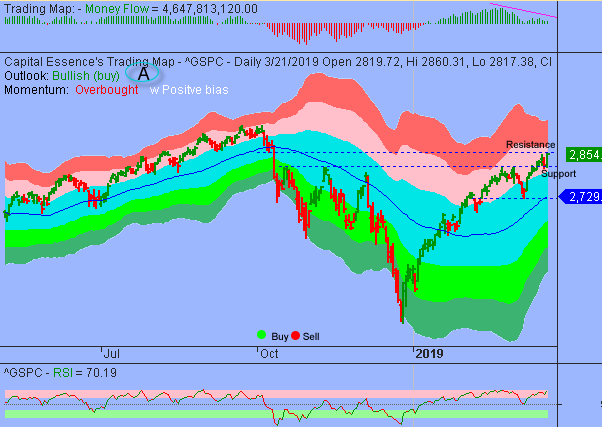 Once again, the S&P rebounded nicely after recent pullback found support near the lower boundary of the pink band.  That level roughly corresponds with the late 2018 and the early March recovery highs.  Thursday’s rally pushed the index up against the October 2018 breakdown point.  This week’s high made a bearish divergence as price made a higher high and Money Flow measure a lower high. Additionally, the return of overbought conditions on an intraday basis suggesting that this is not a time to be long.  With this in mind, we’d look to reduce exposure into overbought strength, which might take the S&P closer to 2880, based on the lower boundary of the red band, before a significant pullback unfolds

In summary, the fact that the S&P is overbought as it fast approaching key overhead resistance suggested that upside gains could be limited.  As for strategy, we’d look to trim positions into overbought strength, which might take the S&P closer to 2880 before a significant pullback unfolds.