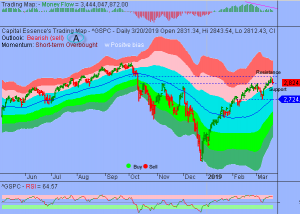 We’ve noted in the previous Market Outlook that: “Tuesday’s bearish reversal bar together with the fact that the S&P is overbought as it test key overhead resistance suggesting that a short-term consolidation is inevitable.  There’s a high probability that the late-day selloff will momentum but an undercut below the 2820 is needed before there is any real prospect of a change in the short-term uptrend pressure.”  As anticipated, S&P closed lower Wednesday, down 0.3 percent to 2,824.23, after the early rally attempt was met with a new wave of selling interest.  The Dow Jones Industrial Average fell 0.6 percent to 25,745.67.  The Nasdaq Composite eked out a gain, closing 0.1 percent higher at 7,728.97.  The CBOE Volatility Index (VIX), widely considered the best gauge of fear in the market, rose more than 2 percent to 13.91.

Transport stocks were under selling pressure Wednesday after FedEx CFO Alan Graf warned in the company’s quarterly report that slowing international macroeconomic conditions and weaker global trade growth trends continue, as seen in the year-over-year decline in our FedEx Express international revenue.  FedEx shares fell more than 3 percent and the SPDR S&P Transportation ETF (XTN) down 1.12 percent on the day but is up more than 10 percent YTD, slightly underperformed the S&P.  Now the question is whether recent selloff is a pause that refreshes or it’s a beginning of something worse?  Below is an update look at a trade in XTN. 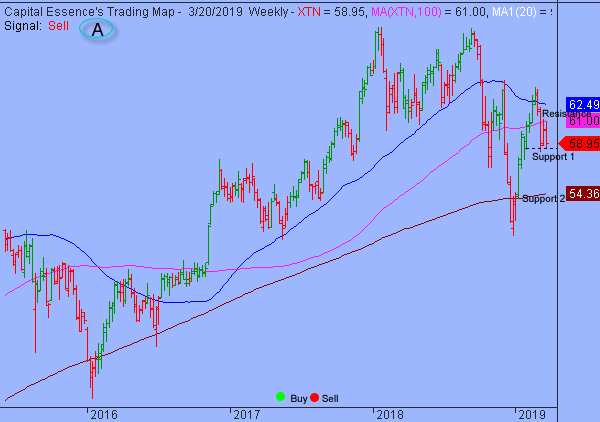 Our “U.S. Market Trading Map” painted XTN bars in red (sell) – see area ‘A’ in the chart.  Over the past few weeks. XTN has been trending lower in a short-term corrective mode after the late December rally ran out of steam near the early 2018 breakdown point and the late 2018 recovery highs.  This week’s downside follow-through confirmed the early March bearish breakout.  A close below 58 on a weekly basis will bring the 4-year moving average, just above 54, into view..

XTN has resistance near 61.  Short-term traders could use that level as the logical level to measure risk against. 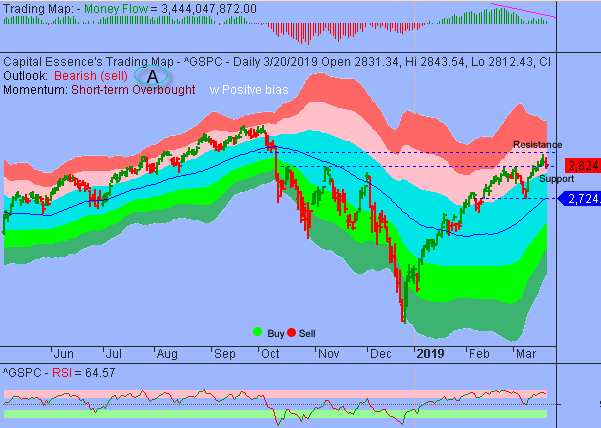 As expected, S&P sold off after the early March rally ran out of steam near the October 2018 breakdown point.  Wednesday’s downside follow-through confirmed Tuesday’s bearish reversal signal.    This week’s high made a bearish divergence as price made a higher high and Money Flow measure a lower high.  This is a negative development, increasing the likelihood of further downside retracement in the days ahead.

Right now, the most important thing to watch is trading behavior near 2824.  A failure to hold above that level will trigger a short-term sell signal with downside target near 2795-2750.

In summary, S&P could signal a downward trajectory, depending on how it closes over the next few days.  Initial support is just above the lower boundary of the pink band, around 2824.  If it closes below that level, the next leg is likely lower, and we’re looking at 2795-2750.