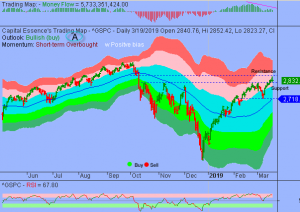 We’ve noted in the previous Market Outlook that: “S&P has confirmed a breakout above key resistance in a reflection of improved momentums.  Market internal has been deteriorated but does not appeared strong enough to generate widespread breakdowns.  As for strategy, traders should consider buying into market dips rather than chasing breakouts.”  As anticipated, stocks traded higher in early Tuesday session on expectations that the Fed will hold the fed funds rate steady and reiterate a patient mindset at the conclusion of its two-day policy meeting Wednesday with the S&P advanced as much as 0.7 percent before sellers stepped in and pushed prices off the intraday high.  The bench mark gauge ended the day just below breakeven at 2,832.57.  The Dow Jones Industrial Average fell 0.1 percent to 25,887.38.  The Nasdaq Composite closed 0.1 percent higher at 7,723.95.  The CBOE Volatility Index (VIX), widely considered the best gauge of fear in the market, jumped more than 3 percent to 13.56.

Chipmaker attracted strong buying support with Advanced Micro (AMD) rose 11.8% after Google confirmed a partnership with the company for its new gaming streaming service.  As such, the iShares PHLX Semiconductor ETF (SOXX) rose 1.30 percent on the day and is up more than 22 percent YTD, outperformed the S&P by a wide margin.  Now the question is whether the rally has more legs?  Below is an update look at a trade in SOXX.

Our “U.S. Market Trading Map” painted SOXX bars in green (buy) – see area ‘A’ in the chart.  The first dominant feature on the chart is the rising trend line starting in 2015.  The second dominant feature of the chart is the sideways trend since early 2018.   The late September 2018 selloff found support near the 38.2% Fibonacci retracement.  The late December rally pushed the ETF up against the 2018 falling trend line resistance.  The early March correction tested and respected support at the 1-year moving average, a key technical level based on moving averages.  This week’s upside follow-through confirmed last week’s bullish breakout above the 2018 falling trend line and opened up for a retest of the 2018 highs, just below 199.  A close above that level has measured to 233, or the 127.2% Fibonacci extension.

SOXX has support near 177.  Short-term traders could use that level as the logical level to measure risk against. 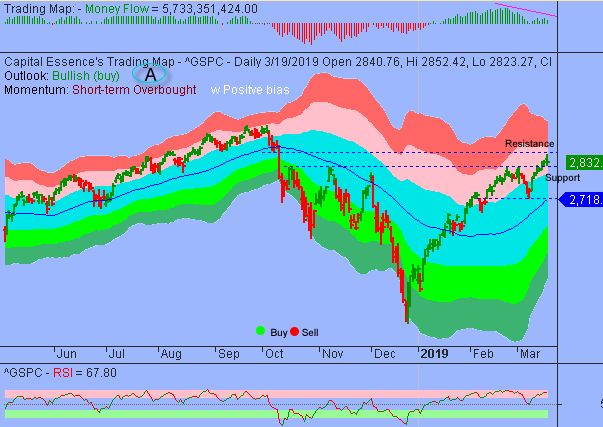 As expected, the S&P moved up to test resistance at the October 2018 breakdown point after climbed above the late 2018 recovery highs.  In accordance to the Japanese candlestick pattern recognition, Tuesday’s bearish reversal bar was a clear indication of supply overwhelming demand.  This pattern is often associated with key turning point particular when it formed near important price level.  Money Flow measure did not confirm last week’s upside breakout as the indicator is well below its February peak, indicating a lack of commitment among the bulls.  Momentum shifted lower from overbought zone, suggesting further short-term weakness likely.  Right now, the most important thing to watch is trading behavior near 2820.  A failure to hold above that level will trigger a short-term sell signal with downside target near 2792.

In summary, Tuesday’s bearish reversal bar together with the fact that the S&P is overbought as it test key overhead resistance suggesting that a short-term consolidation is inevitable.  There’s a high probability that the late-day selloff will momentum but an undercut below the 2820 is needed before there is any real prospect of a change in the short-term uptrend pressure.