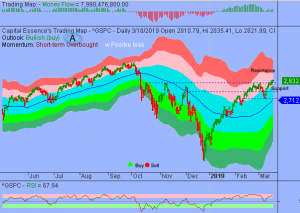 Stocks closed higher Monday as lack of “new” catalysts helped the market advance in front of the Fed’s policy meeting this week.  For the day, the S&P closed 0.4 percent higher at 2,832.94. The Nasdaq Composite gained 0.3 percent to close at 7,714.48. The Dow Jones Industrial Average also advanced 0.3 percent to 25,914.10.  The CBOE Volatility Index (VIX), widely considered the best gauge of fear in the market, rose nearly 2 percent to 13.10.

Financial stocks attracted strong buying support following report that Fidelity National Information Services (FIS) acquiring Worldpay (WP) in a $43 billion cash-and-stock deal and Deutsche Bank (DB) confirming it is in merger talks with Commerzbank (CRZBY).  As such, the Financial Select Sector SPDR ETF (XLF) rose 1.01 percent on the day and is up nearly 13 percent YTD, roughly in line with the S&P.  Now the question is whether the rally has more legs?  Below is an update look at a trade in XLF. 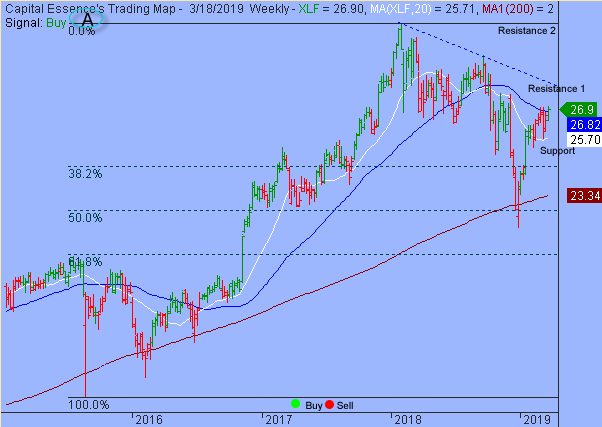 Our “U.S. Market Trading Map” painted XLF bars in green (buy) – see area ‘A’ in the chart.  Over the past few weeks, XLF has been trending lower in a short-term corrective mode after the late 2018 rally ran into resistance near the 1-year moving average.  The correction found support near the 25.70 zone.  This week rally’s pushed the ETF above the 1-year moving average, clearing an important hurdle based on moving averages.  This is a bullish development and opened up for a test of the 2018 falling trend line resistance, just below 29.  A close above that level on a weekly basis has measured move to around 30.30, or the 2018 highs.

XLF has support near 25.70.  Short-term traders could use that level as the logical level to measure risk against. 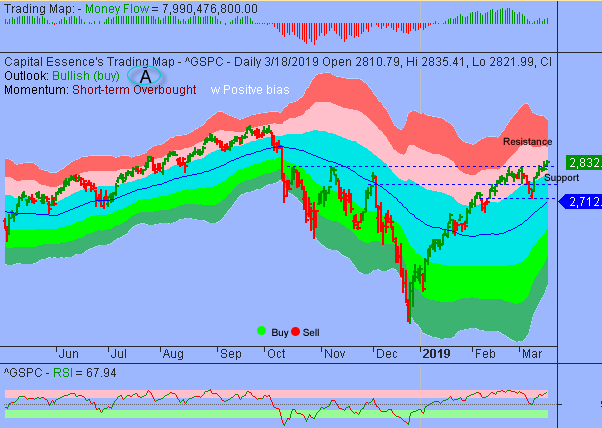 After correcting nearly 100 points from the March 4 peak and meeting anticipated support near the early February bullish breakaway gap, S&P rebound has taken market above the important sentiment 2800 mark.  This week’s upside follow-through confirmed last week’s bullish breakout above the October-November peaks.  Momentum indicator trended higher from overbought zone, indicating an internal strength.  Nevertheless, Money Flow measure did not confirm the breakout as the indicator is well below its February peak, suggesting a lack of commitment among the bulls.  This might put a cap on the upside.

For the near term, the market has carved out key short-term resistance and support levels for traders to monitor.  If S&P holds above 2800, then a retest of the 2018 highs, around 2940, would be easier to be achieved

In summary, S&P has confirmed a breakout above key resistance in a reflection of improved momentums.  Market internal has been deteriorated but does not appeared strong enough to generate widespread breakdowns.  As for strategy, traders should consider buying into market dips rather than chasing breakouts.