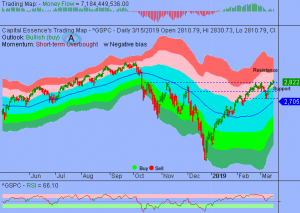 The semiconductor space rallied following Broadcom (AVGO) better-than-feared earnings report and called for the industry to hit a bottom in the second quarter. The Philadelphia Semiconductor Index jumped nearly 3 percent.  Many of its components helped drive the outperformance of the tech sector.  As such, the Technology Select Sector SPDR ETF (XLK) rose 1.21 percent on the day and is up nearly 18 percent YTD, outperformed the S&P by a wide margin.  Now the question is whether the rally has more legs?  Below is an update look at a trade in XLK. 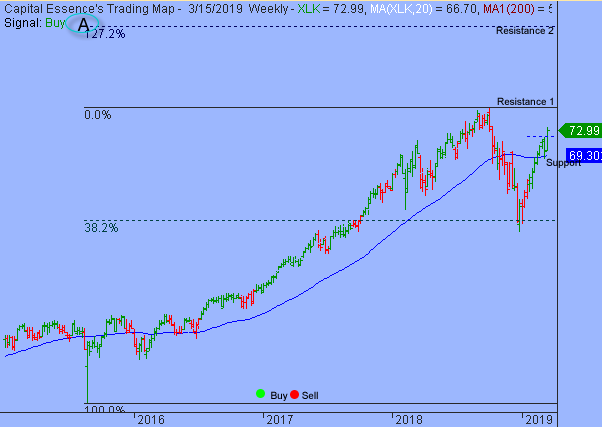 Our “U.S. Market Trading Map” painted XLK bars in green (buy) – see area ‘A’ in the chart. XLK has been on a tear in recent days after the late 2018 selloff found support near the 38.2% Fibonacci retracement of the 2015-2018 upswing.  Last week’s rally pushed the ETF above the early March congestion zone, signify an upside reversal and bullish breakout.  This is a positive development, setting the stage for a retest of the 2018 highs, just above 76.  A close above that level has measured move to around 88, or the 127.2% Fibonacci extension.

XLK has support near 69.30.  Short-term traders could use that level as the logical level to measure risk against. 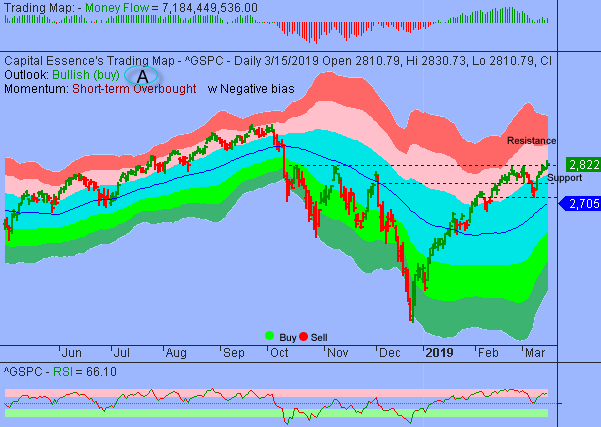 Key technical development in Friday session was a clear break above 2817.  That level was significant when the S&P tested and failed in early March.  This is a positive development but let’s notice that Money Flow measure did not confirm the breakout as the indicator is well below its February peak.  Additionally, the short-term overbought will give the bulls more pressure than they have already had. So it should not be surprising to see some kind of a pullback, the way we had in early February and March, prior to the new upswing.

For the near term, the market has carved out key short-term resistance and support levels for traders to monitor.  If S&P holds above 2800, then a retest of the 2018 highs, around 2940, would be easier to be achieved

In summary, S&P cleared key resistances, breaking out to multi-month high.  However, market is short-term overbought following recent advance. There could be a sell-off in the offing but it would be shallow if so.