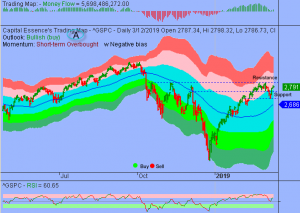 We’ve noted in the previous Market Outlook that: “S&P tested and held support at the early February bullish breakaway gap.  While Monday’s rally had improved the posture of our short-term indicators, which supportive of further upside probing, follow-through is the key.”  As anticipated, S&P gained 0.3 percent to close at 2,791.52 as softening inflation data and leadership from large-cap tech stocks had helped offset continued weakness in Boeing (BA).  The Nasdaq Composite advanced 0.44 percent to 7,591.03.  The Dow Jones Industrial Average fell 0.4 percent to 25,554.66.  The CBOE Volatility Index (VIX), widely considered the best gauge of fear in the market, fell nearly 4 percent to 13.77.

Shares of Boeing (BA) fell for second straight day following reports that more countries, including the EU, have announced the grounding of the 737 MAX.  As such, the U.S. Global Jets ETF (JETS) fell 1.54 percent on the day but is up more than 3 percent YTD, underperformed the S&P by a wide margin.  Now the question is whether recent pullback is a pause that refreshes or it’s a beginning of something worse?  Below is an update look at a trade in JETS. 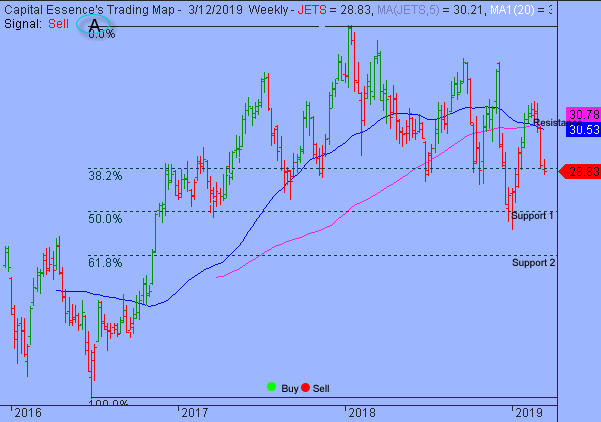 JETS has resistance near 30.50.  Short-term traders could use that level as the logical level to measure risk against. 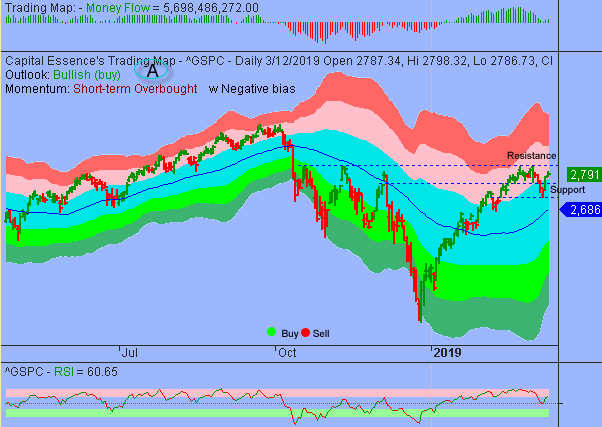 S&P moved up to test resistance at the important sentiment 2800 mark after breaking above 2770, or the lower boundary of the late February congestion zone.  Money Flow measure trended higher from above the zero line, indicating a positive net demand for socks.  Momentum indicator is also pointing from near overbought zone, producing a lift to test and exceed March highs.  Nevertheless, we’d be cautious against taking large position at this stage as market is short-term overbought following recent advance.

For the near term, the market has carved out key short-term resistance and support levels for traders to monitor.  If S&P holds above 2750, then a retest of 2817, or the October-March highs, would be easier to be achieved.

In summary, although short-term overbought condition is keeping buyers at bay, the March high, near S&P’s 2817, continues to act as price magnet.  Short-term traders can anticipate increase short-term volatility with rapid up and down moves in the market.