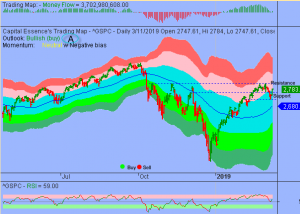 Stocks closed sharply higher Monday amid dovish comments from Fed Chair Jerome Powell and strength in tech stocks.  For the day, the Dow Jones Industrial Average added 0.8 percent to close at 25,650.88. The S&P gained 1.47 percent to end the day at 2,783.30. The Nasdaq Composite advanced 2.02 percent to 7,558.06.  The CBOE Volatility Index (VIX), widely considered the best gauge of fear in the market, tumbled more than 10 percent to 14.33.

Tech stocks outperformed as the FAANG trade was back in play with shares of Apple (AAPL) increasing 3.5 percent after the stock was upgraded to ‘Buy’ from ‘Neutral’ at Bank of America/Merrill Lynch. Facebook (FB) also received an upgrade to ‘Buy’ from ‘Neutral’ at Nomura.  As such, the Technology Select Sector SPDR ETF (XLK) jumped 2.15 percent on the day and is up more than 15 percent YTD, outperformed the S&P by a wide margin.  Now the question is whether the rally has more legs?  Below is an update look at a trade in XLK. 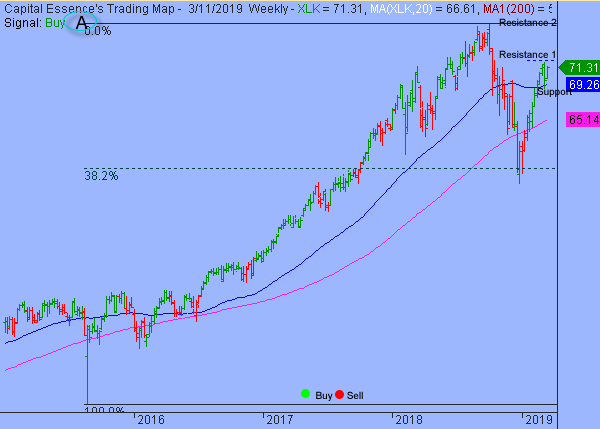 Our “U.S. Market Trading Map” painted XLK bars in green (buy) – see area ‘A’ in the chart. The first dominant feature on the chart is the rising line starting in 2015. The second dominant feature of the chart is the downward trend in late 2018, which represented the digestion period.  The December selloff found support near the 38.2% Fibonacci retracement.  The January oversold rally pushed the ETF above the 1-year moving average, a key technical level based on moving averages.  Over the past few weeks, XLK has been basing sideways using the 1-year moving average as support as it works off overbought conditions.  The overall technical backdrop remains bullish, suggested that the ETF will climb up to test the 2018 high as soon as it works off excessive optimism.  A close above 72 has measured move to 76, or the 2018 high.

XLK has support near 69.  Short-term traders could use that level as the logical level to measure risk against. 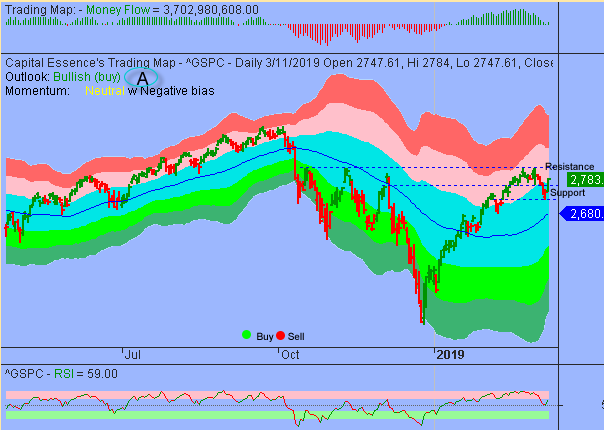 S&P rebounded nicely off support at the early February bullish breakaway gap.  Monday’s rally pushed the index up against the lower boundary of the pink band.  This level was significant when the S&P fell below it last week. Money Flow measure shifted higher from above the zero line, indicating a positive net demand for socks.  Momentum indicator shifted higher from near overbought zone, allowing additional upside probing.

For the near term, the market has carved out key short-term resistance and support levels for traders to monitor.  If S&P holds above 2750, then a retest of 2817, or the October-March highs, would be easier to be achieved.

In summary, S&P tested and held support at the early February bullish breakaway gap.  While Monday’s rally had improved the posture of our short-term indicators, which supportive of further upside probing, follow-through is the key.  S&P has 2817 to trade against.  If that were to break, we could see 2900 next.