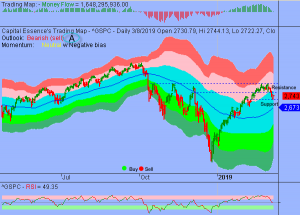 We’ve noted in the previous Market Outlook that: “S&P broke key support Thursday, signify a bearish trend reversal.  Nevertheless, it will be important to monitor the retreat and rebound behaviors to determine whether breakouts are decisive.  Right now follow-through is the key.  A close below 2750 this week would see a pickup in near-term volatility.”  As anticipated, stock sold off sharply early Friday that saw the S&P lost nearly 1 percent as disappointing growth in U.S. jobs contributed to global growth concerns and profit-taking interest. However, renewed buying interest in the afternoon helped the benchmark index trim its loss to 0.2 percent to close at 2,743.07.  The Dow Jones Industrial Average pulled back 0.1 percent to close at 25,450.24. The Nasdaq Composite slid 0.2 percent to close at 7,408.14.  The CBOE Volatility Index (VIX), widely considered the best gauge of fear in the market, fell more than 3 percent to 16.05.

Weak trade data out of China, where February exports declined 20.7% year-over-year, far below analyst expectations and wiping out a surprise jump in January fueled concerns about the global economy slow down.  As such, the Industrial Select Sector SPDR ETF (XLI) fell 0.20 percent on the day but is up more than 15 percent YTD, outperformed the S&P by a wide margin.  Now the question is whether recent selloff is a pause that refreshes or it’s a beginning of something worse?  Below is an update look at a trade in XLI. 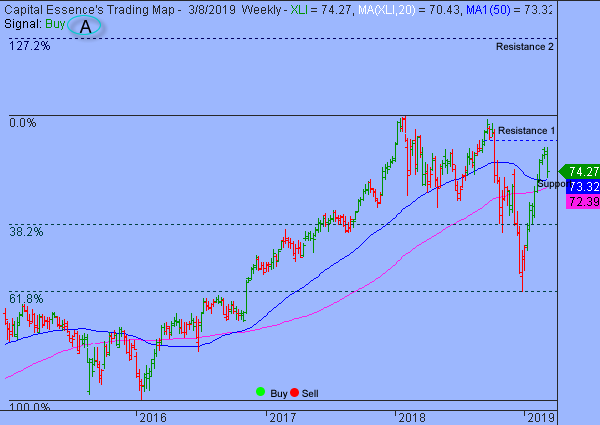 Our “U.S. Market Trading Map” painted XLI bars in green (buy) – see area ‘A’ in the chart. The first dominant feature on the chart is the rising line starting in early 2016. The second dominant feature of the chart is the downward trend in late 2018, which represented the digestion period.  The December selloff found support near the 61.8% Fibonacci retracement.  The January oversold rally pushed the ETF up against the October breakdown point.  Last week’s massive selloff is a clear indication of supply overwhelming demand.  Over the next few weeks, the most important thing to watch is the retreat and rebound behavior as the 73-72 zone is tested as support.  A close below that level has measured move to around 70. Short-term traders could use that level as the logical level to measure risk against. 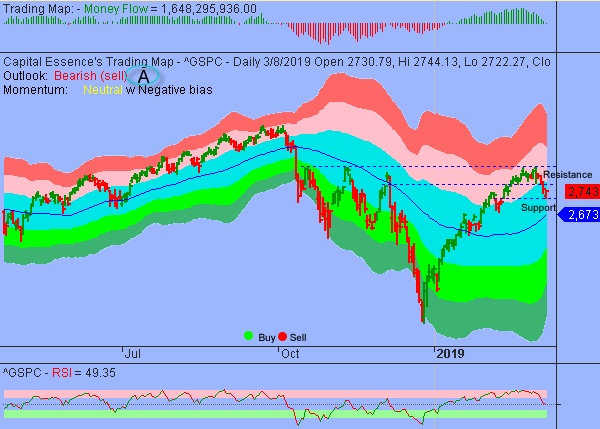 S&P moved down to test support at the early February bullish breakaway gap after falling below the lower boundary of the pink band on Thursday.  The late day rally attempt suggested that the support would hold, at least for the time being.  Short-term momentum has weakened but does not appear strong enough to generate major breakdowns. Money Flow measure has been falling sharply over the past few days, suggesting that the bears are more aggressive as prices dropped than the bulls were as prices ascended.  For the near term, the market has carved out key short-term resistance and support levels for traders to monitor.  If S&P breaks and holds above 2750, then a retest of 2817, or the October-March highs, would be easier to be achieved.

In summary, market internals had been weakened as S&P moved down to test support at the early February bullish breakaway gap.  The longer the index stays near that level, the more vulnerable it is to lower prices.  This is the real danger in the current market.