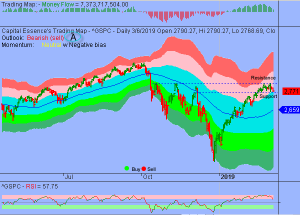 We’ve noted in the previous Market Outlook that: “S&P is trapped within narrow trading range as traders await new market moving catalysts.”  As anticipated, the S&P lost 0.7 percent on Wednesday, pulling back for the third straight session.  The Dow Jones Industrial Average fell 0.5 percent to 25,673.46. The Nasdaq Composite declined 0.9 percent to 7,505.92.  The CBOE Volatility Index (VIX), widely considered the best gauge of fear in the market, surged nearly 7 percent to 15.74.

Congressional wrangling to rein in drug prices, and health care costs in general, continued to dampen buying interest in health care stocks.  As such, the Health Care Select Sector SPDR ETF (XLV) fell 1.46 percent on the day but is up more than 4 percent YTD, underperformed the S&P.  Now the question is whether recent selloff is a pause that refreshes or it’s a beginning of something worse?  Below is an update look at a trade in XLV. 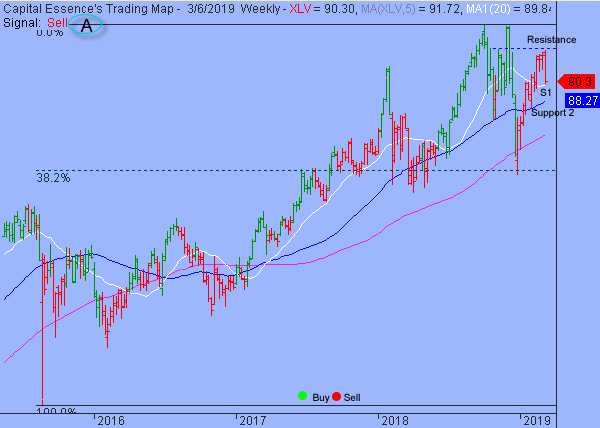 Our “U.S. Market Trading Map” painted XLV bars in red (sell) – see area ‘A’ in the chart. The first dominant feature on the chart is the rising line starting in late 2015. The second dominant feature of the chart is the downward trend in late 2018, which represented the digestion period.  The December selloff tested and respected support at the 38.2% Fibonacci retracement.  The January oversold rally pushed the ETF up against the November 2018 recovery high.  This week’s massive bearish engulfing bar indicated that the resistance would hold.  Over the next few days, traders should monitor trading behavior near 89.80.  A close below that level will bring the 88-84 supporting zone into view.

XLV has resistance near 93.50.  Short-term traders could use that level as the logical level to measure risk against. 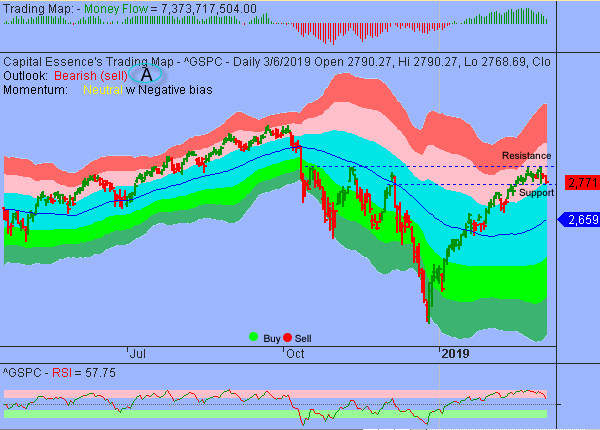 As anticipated, S&P retreated after recent penetration of 2816, a key technical level, was met with a wave of selling interest.  Money Flow measure trended lower but still above the zero line, indicating a positive net demand for stocks.  This is a bullish development, suggesting that the index could be basing sideways as it digests overbought conditions rather than falling significantly lower.  For now, 2750 is the line in the sand.  A close below that level would see a pickup in near-term volatility.

In summary, the S&P is in a midst of a short-term consolidation phase.  With Money Flow measure above the zero line, the path with least resistance is higher.  Additionally, the fact that the index had managed to hold on to most of recent gains in the face of such extreme overbought condition, suggested that sell-off should be shallow and quick because the sideline money will try to fight its way back into the market.  This increases the probability that the S&P will break to new high as soon as the market works off overbought conditions.