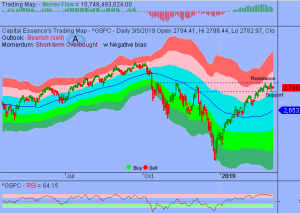 We’ve noted in the previous Market Outlook that: “S&P remains in a consolidation phase that reflects an indecisive market.  While near-term risk is greater to the downside, the long-term technical backdrop remains positive so sell-off should be shallow and quick because the sideline money will try to fight its way back into the market.”  As anticipated, the S&P dropped 0.4 percent in early action but selling efforts were tempered following the release of the stronger-than-expected New Home Sales report for December and the ISM Non-Manufacturing Index for February.  The bench mark gauge recovered some of the early loss and closed slightly lower, down 0.1 percent at 2,789.65.  The Dow Jones Industrial Average also lost 0.1 percent to 25,806.63.  The Nasdaq Composite closed just below breakeven at 7,576.36.  The CBOE Volatility Index (VIX), widely considered the best gauge of fear in the market, gained less than 1 percent to 14.74.

Better-than-expected earnings results and guidance from Target and Kohl’s provided some support for the sector. Their solid results helped spur gains in the SPDR S&P Retail ETF (XRT) rose 0.82 percent on the day but is up more than 11 percent YTD, roughly in line with the S&P.  Now the question is whether the rally has more legs?  Below is an update look at a trade in XRT. 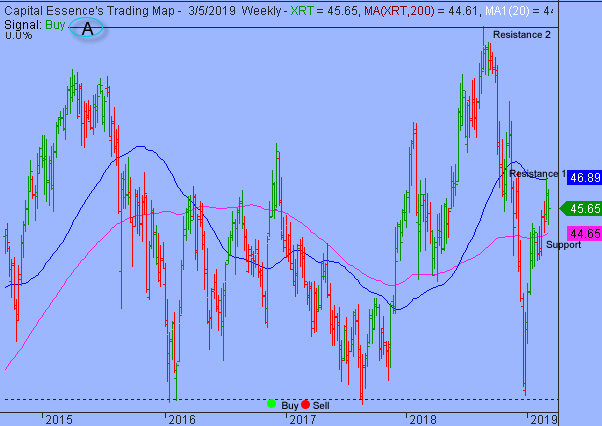 Our “U.S. Market Trading Map” painted XRT bars in green (buy) – see area ‘A’ in the chart. The first dominant feature on the chart is the rising line starting in late 2015. XRT has been on a tear in recent weeks after the late 2018 selloff found support near the 2016-2017 lows.  The December 2018 rally pushed the ETF up against the 1-year moving average, a key technical level based on moving averages. A close above that level will trigger a new buy signal with upside target near 53, or the 2018 highs.

XRT has support near 44.65.  Short-term traders could use that level as the logical level to measure risk against. 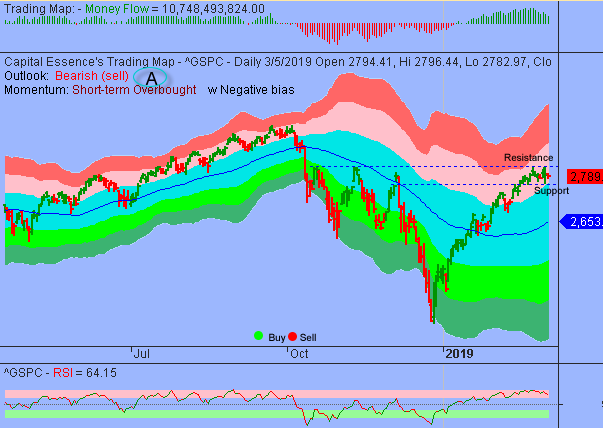 The big picture remains the same.  There is a consolidation near the lower boundary of the pink band. That level was significant when the S&P climbed above it in late January.  Momentum indicator trended lower over the past few days but it’s much closer to overbought than oversold zone.  So it should not be surprise to see further consolidation as overbought conditions are absorbed.  While seemingly vulnerable to some short-term weaknesses, the positive Money Flow measure could help putting a short-term floor under the market.

For now, 2750 is the line in the sand.  A close below that level would see a pickup in near-term volatility.

In summary, S&P is trapped within narrow trading range as traders await new market moving catalysts.  Technical pressures are building up as the market dances its way into an increasingly tight trading range. S&P’s 2750 marks the inflection point.  A failure to hold above key level indicates a change in sentiment and a much deeper pullback should be expected.