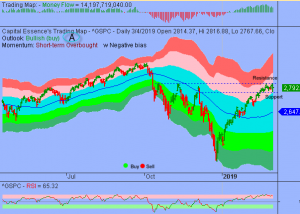 We’ve noted in the previous Market Outlook that: “S&P cleared key technical resistance, breaking out from the one-week downward trend.  Nevertheless, it will be important to monitor the breakout and retreat behaviors over the next few days to determine whether breakouts are decisive.”  As anticipated, the S&P advanced as much as 0.5 percent following a report that the U.S. and China are nearing a trade deal. The benchmark index was then down as much as 1.3 percent as traders questioned whether a trade deal would revive global growth as many headwinds loom, including Brexit, a potential U.S.-Europe trade war and an economic slowdown in China.  For the day, the bench mark gauge dropped 0.4 percent to 2,792.62.  The Dow Jones Industrial Average fell 0.8 percent to 25,819.65. The Nasdaq Composite closed 0.2 percent lower at 7,577.57.  The CBOE Volatility Index (VIX), widely considered the best gauge of fear in the market, jumped nearly 8 percent to 14.63.

Financial stocks fell as government bond yields, which trade inversely to prices, declined amid a flight to safety.  Falling Treasury yields are seen as a headwind for banks, reducing their net interest margin, the difference between the interest income generated by operations and the amount of interest paid out to their lenders.  As such, the Financial Select Sector SPDR ETF (XLF) fell 0.64 percent on the day but is up more than 11 percent YTD, slightly outperformed the S&P.  Now the question is whether recent pullback is a pause that refreshes or it’s a beginning of something worse?  Below is an update look at a trade in XLF. 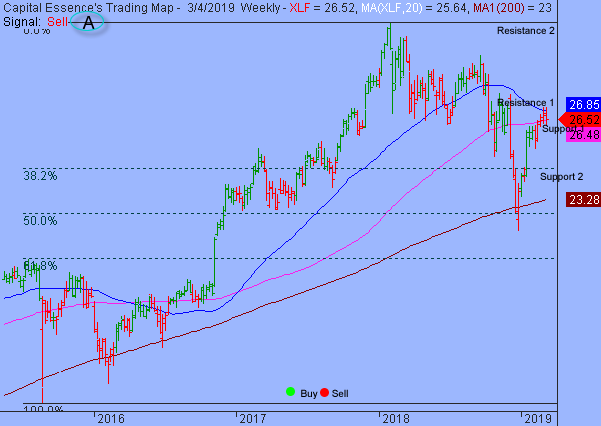 Our “U.S. Market Trading Map” painted XLF bars in red (sell) – see area ‘A’ in the chart. The first dominant feature on the chart is the rising line starting in late 2015.  The second dominant feature of the chart is the downward trend since early 2018, which represented the digestion period.  Over the past few weeks, XLF has been basing sideways after the late 2018 rally ran out of steam near the 1-year moving average.  This level was significant when XLF fell below it in late 2018.  A close above that level will break the bearish lower lows and lower highs pattern and trigger acceleration toward the 2018 high, just above 30.

XLF has support near 26.40.  A close below that level will trigger a short-term sell signal and a retest of 24.50, or the 38.2% Fibonacci retracement, should be expected.  Short-term traders could use that level as the logical level to measure risk against. 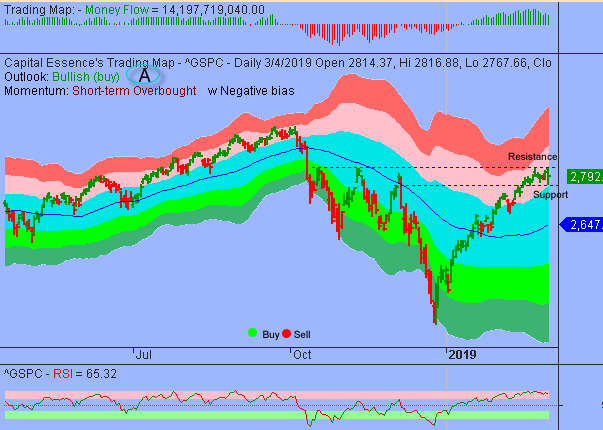 S&P moved down to test support at the late February breakout point after the early rally attempt ran out of steam near the October-December 2018 highs.  The late day rally suggested that the support would hold.  In fact, not much has been changed over the past few weeks.  S&P bounced back and forth within the narrow 2760-2817 trading range, which represented the digestion period in the aftermath of the late December upswing.  Money Flow measure is above the zero line, indicating a positive net demand for stocks.  This is a bullish development, suggesting that the index might breakout to new highs as soon as it works off excessive optimism.

In summary, S&P remains in a consolidation phase that reflects an indecisive market.  While near-term risk is greater to the downside, the long-term technical backdrop remains positive so sell-off should be shallow and quick because the sideline money will try to fight its way back into the market.