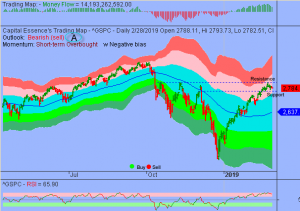 Stocks closed lower Thursday in another tight-ranged session as investors digested the better-than-expected GDP data and some geopolitical drama.  For the day, the S&P dropped nearly 0.3 percent to finish the session at 2,784.49.  The Nasdaq Composite and the Dow Jones Industrial Average also lost about 0.3 percent to close at 7,532.53 and 25,916 respectively.  The CBOE Volatility Index (VIX), widely considered the best gauge of fear in the market, rose less than 1 percent to 14.78.

Report that Donald Trump abruptly ending a two-day summit with North Korean leader Kim Jong-un together with weak data from China’s manufacturing sector triggered a fight to safe heaven assets that saw the utilities, consumer staples, and real estate sectors outperformed.  As such, the Utilities Select Sector SPDR ETF (XLU) rose 0.58 percent on the day and is up nearly 8 percent YTD, slightly underperformed the S&P.  Now the question is whether the rally has more legs?  Below is an update look at a trade in XLU. 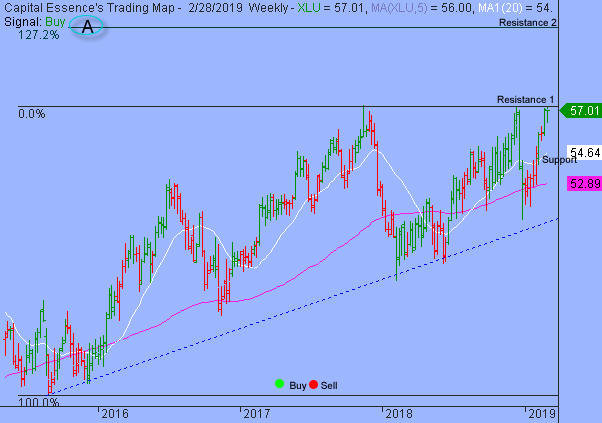 Our “U.S. Market Trading Map” painted XLU bars in green (buy) – see area ‘A’ in the chart. XLU has been on a tear in recent days after the December selloff found support near the 2-year moving average and the 2015 rising trend line.  This week’s rally pushed the ETF up against the prior highs set in late 2017 and 2018.  This level is significant in charting terms.  A close above that level will trigger a major buy signal with upside target near 61, or the 127.2% Fibonacci extension.

XLU has support just below 55.  Short-term traders could use that level as the logical level to measure risk against. 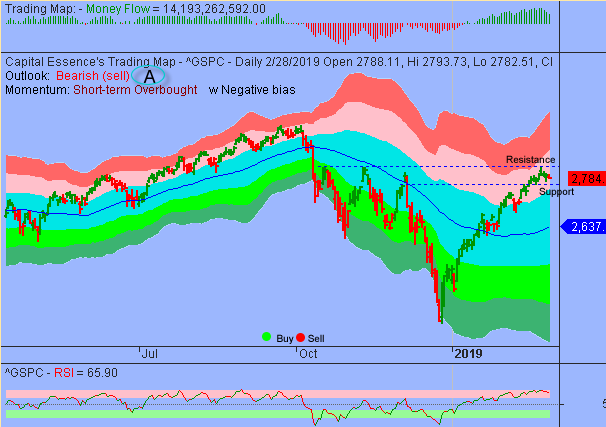 The big picture remains the same.  There is a consolidation near the important sentiment 2800 mark.  That level was significant when the S&P tested and rolled over in October, November and December 2018.  Market internal has been weakened but downside momentum does not appear strong enough to generate a widespread breakdown.

Traders however, must be mindful that while seemingly vulnerable to short-term price weakness, Money Flow measure remains above the zero line, indicating a positive net demand for stocks.  This suggested that selling into strength might not be the best strategy in a market that is likely to bounce back.

Over the next few days, traders should monitor trading behavior near 2776.  A failure to hold above that level will bring the lower boundary of the pink band, near 2750, into view.  As for resistance, 2817 is the line in the sand.  A close above that level will trigger acceleration toward the 2018 highs, around 2940.

In summary, recent trading actions leaving the S&P in what looks to us like an orderly high level consolidation of the February rally.  The index is holding firmly above 2750, a level it has not breached since market broke down in late 2018.  This is a positive development, increased the probability that the S&P will break out to new highs as soon as the market shakes off excessive bullishness.