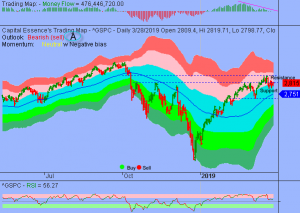 Stocks rose on Thursday as trade talks between China and the U.S. restarted but fears that the economy may be slowing down put the cap on the upside.  For the day, the Dow Jones Industrial Average rose 0.4 percent to 25,717.46. The S&P also gained 0.4 percent to 2,815.44. The Nasdaq Composite advanced 0.3 percent to close at 7,669.17.  The CBOE Volatility Index (VIX), widely considered the best gauge of fear in the market, fell nearly 5 percent to 14.43.

Report that a U.S. trade delegation, which included USTR Robert Lighthizer and Treasury Secretary Steven Mnuchin, arrived in Beijing for a two-day meeting on Thursday sending the Invesco China Technology ETF (CQQQ) notably higher, up 0.86 percent on the day and is up more than 22 percent YTD, outperformed the S&P by a wide margin.  Now the question is whether the rally has more legs?  Below is an update look at a trade in CQQQ. 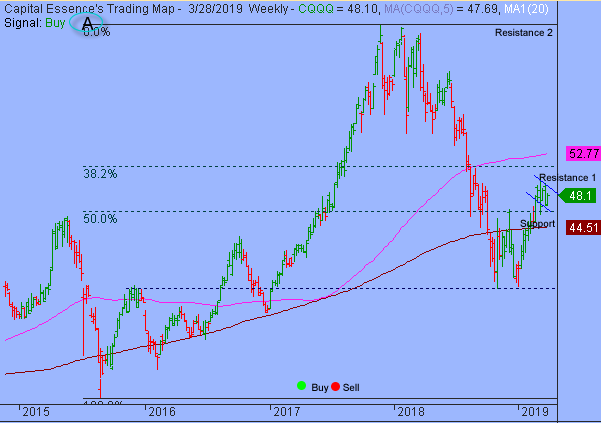 Our “U.S. Market Trading Map” painted CQQQ bars in green (buy) – see area ‘A’ in the chart.  Over the past few weeks, CQQQ has been trending lower in a short-term corrective mode after the late 2018 rally ran out of steam near the 50 zone.  That level roughly corresponds with the 38.2% Fibonacci retracement.  The correction tested and respected support near the 50% Fibonacci retracement.  This week’s rally is testing the March falling trend line resistance.  That level is significant in charting terms. A close above that level suggested that the one month bullish flag pattern has resolved itself into a new upswing with upside target around 52-55.  A close above 55 has measured move to around 67.

CQQQ has support near 46.  Short-term traders could use that level as the logical level to measure risk against. 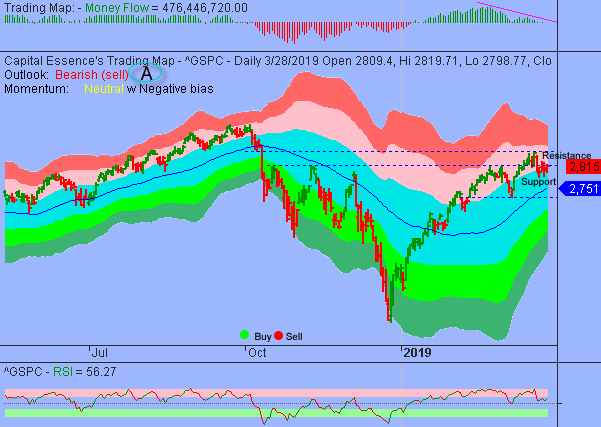 Near-term picture remains the same.  There is a consolidation between the high 2780s and the lower boundary of the pink band.  That level was significant when the S&P fell below it last week.  Money Flow measure is flattening near zero line, indicating a lack of commitment. This is a short-term negative development but downside momentum does not appeared strong enough to generate widespread breakouts.  So it should not be surprising to see further backings and fillings in the coming days.  Last week’s pivot high of 2860 marks an inflection point.  A close above that level signify resumption of the multi-month rally and trigger acceleration toward 2900.  As for support, 2800 is the line in the sand.  We’d turn particular bearish if the index closes twice below that level.

In summary, technical pressures are building up as the S&P dances its way into an increasingly tight trading range. 2800 marks the inflection point.  A failure to hold above that level indicates a change in sentiment and a much deeper pullback should be expected.