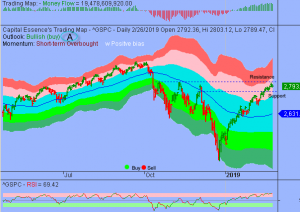 We’ve noted in the previous Market Outlook that: “while the overall technical backdrop remains positive, return of extreme overbought conditions on an intraday basis suggesting that this is not a time to be long.  As for strategy, we’d look to trim positions into overbought strength.”  As anticipated, S&P wavered between small gains and losses as traders weighed mixed economic data, key corporate news, and comments from Fed Chair Jerome Powell.  For the day, the benchmark gauge pulled back 0.1 percent to close at 2,793.49. The Nasdaq Composite closed 0.07 percent lower at 7,549.30.  The Dow Jones Industrial Average dipped 0.1 percent to 26,057.98.  The CBOE Volatility Index (VIX), widely considered the best gauge of fear in the market, rose more than percent to 15.17.

Homebuilders were under selling pressure Tuesday following report that home prices increased 4.7 percent annually in December, down from 5.1 percent in November, according to the S&P CoreLogic Case-Shiller U.S. National Home Price Index.  That is the slowest pace since August 2015.  As such, the SPDR S&P Homebuilders ETF (XHB) fell 0.54 percent on the day but is up more than 19 percent YTD, outperformed the S&P by a wide margin.  Now the question is whether recent pullback is a pause that refreshes or it’s a beginning of something worse?  Below is an update look at a trade in XHB. 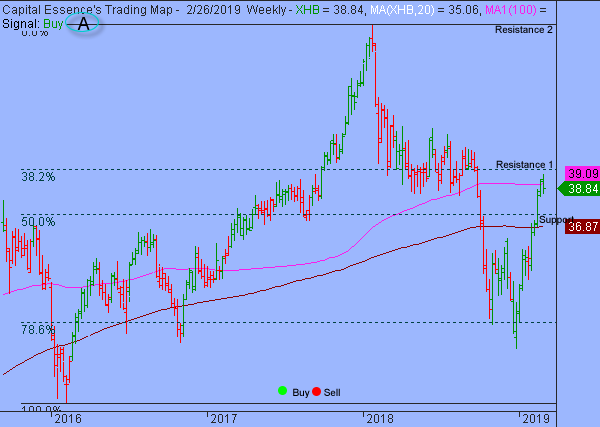 Our “U.S. Market Trading Map” painted XHB bars in green (buy) – see area ‘A’ in the chart.  The first dominant feature on the chart is the rising trend line starting in early 2016.  The second dominant feature of the chart is the downward trend since early 2018.   The late 2018 selloff found support near the 78.6% Fibonacci retracement. The late December rally pushed the ETF above the 2-year moving average, a key technical level based on moving average.  That level was significant when XHB fell below it in September 2018.  Over the next few weeks, traders should monitor trading behavior as the 40 zone is tested as resistance.  A close above that level has measured move to 47, or the 2018 high.

XHB has support just below 38.  Short-term traders could use that level as the logical level to measure risk against. 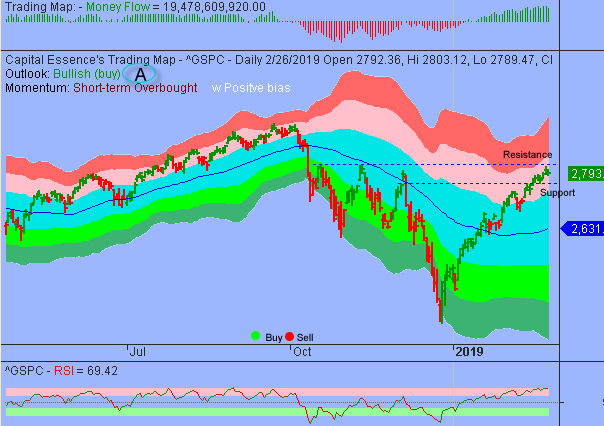 S&P retreated after recent rally ran out of steam near the important sentiment 2800 mark.  That level roughly corresponds with the October and November 2018 recovery highs.  Momentum indicator shifted lower near overbought zone, suggesting further short-term weakness likely.  Nevertheless, Money Flow measure hovers near the highest level since summer 2018, indicating a strong net demand for stocks.  This could help putting a short-term floor under the market.

Over the next few days, traders should monitor trading behavior near 2788.  A failure to hold above that level will trigger a short-term sell signal with downside target near 2750.

In summary, an overbought pullback consolidation interrupted the early February rally in the S&P.  Although seemingly vulnerable to further short-term weakness, the overall technical backdrop remains positive so sell-off could be shallow and quick because the sideline money will try to fight its way back into the market.