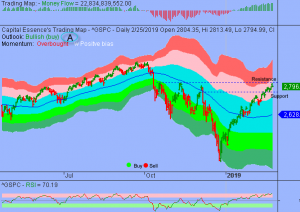 We’ve noted in the previous Market Outlook that: “overbought conditions have returned on a daily basis but momentum remains supportive. It is possible that S&P could continue to drift higher as trading sentiment remains strong.  As for strategy, we’d look to reduce exposure into overbought strength, which might take the S&P closer to 2800 before a significant pullback unfolds.”  As anticipated, S&P advanced as much as 0.8 percent on Monday after Donald Trump said he will delay the March 1 trade deadline as negotiations with China have progressed favorably.  The benchmark index, however, steadily retreated throughout the session, ultimately finishing higher by 0.1 percent.  The Dow Jones Industrial Average rose 0.2 percent the Nasdaq Composite added 0.4 percent.  The CBOE Volatility Index (VIX), widely considered the best gauge of fear in the market, surged nearly 10 percent to 14.85.

General Electric (GE) gave the industrial sector a boost after it agreed to sell its biopharma business to Danaher (DHR) for $21.4 billion, which includes $21 billion in cash.  As such, the Industrial Select Sector SPDR ETF (XLI) rose 0.39 percent on the day and is up nearly 19 percent YTD, outperformed the S&P by a wide margin.  Now the question is whether the rally has more legs?  Below is an update look at a trade in XLI. 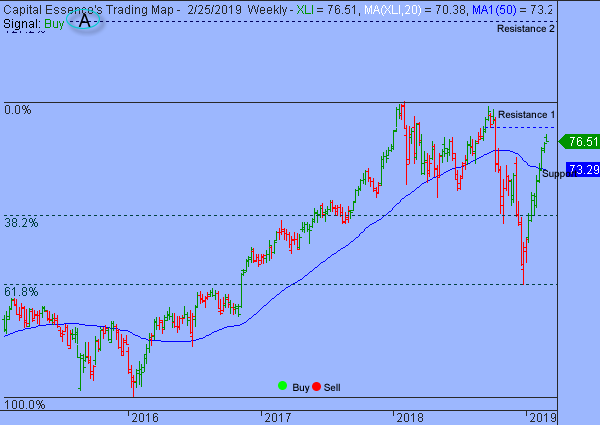 Our “U.S. Market Trading Map” painted XLI bars in green (buy) – see area ‘A’ in the chart.  The first dominant feature on the chart is the rising trend line starting in early 2016.  The second dominant feature of the chart is the downward trend since early 2018.   The late 2018 selloff found support near the 61.8% Fibonacci retracement.  XLI has been on a tear in recent weeks after the late December rally pushed the ETF above the 1-year moving average, a key technical level based on moving average.  That level was significant when XLI fell below it in October 2018.  Over the next few weeks, traders should monitor trading behavior as the 78-81 zone is tested as resistance.  A close above 81 has measured move to 90, or the 127.2% Fibonacci extension.

XLI has support just below 74.  Short-term traders could use that level as the logical level to measure risk against. 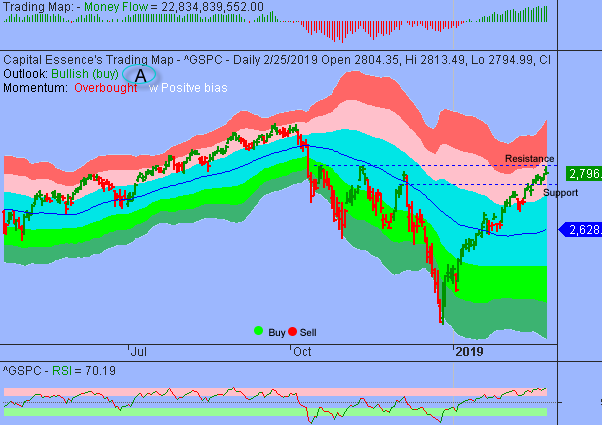 As expected, S&P moved up to test resistance at the October and November 2018 recovery highs.  Money Flow measure hovers near the highest level since summer 2018, indicating a strong net demand for stocks.  This is a positive development but the return of extreme overbought conditions on an intraday basis suggesting that this is not a time to be long.  Over the next few days, traders should monitor trading behavior near 2785.  A failure to hold above that level will trigger a short-term sell signal with downside target near 2750.

In summary, while the overall technical backdrop remains positive, return of extreme overbought conditions on an intraday basis suggesting that this is not a time to be long.  As for strategy, we’d look to trim positions into overbought strength.