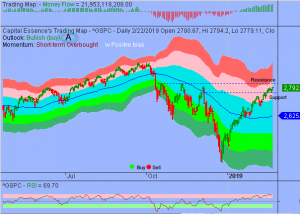 We’ve noted in the previous Market Outlook that: “an overbought pullback consolidation interrupted the early February rally in the S&P.  Although seemingly vulnerable to further short-term weakness, the overall technical backdrop remains positive so sell-off could be shallow because the sideline money will try to fight its way back into the market.”  As anticipated, S&P climbed 0.6 percent on Friday to 2,792.67 as U.S.-China trade talks showed signs of progress.  The Dow Jones Industrial Average gained 0.7 percent to 26,031.81.  The Nasdaq Composite advanced 0.9 percent to 7,527.54.  The CBOE Volatility Index (VIX), widely considered the best gauge of fear in the market, fell more than 6 percent to 13.51.

Optimism over the chances of U.S.-China securing a deal to end their protracted trade war send commodities prices higher.  As such, the Global X Copper Miners ETF (COPX) jumped 2.91 percent on the day and is up more than 21 percent YTD, outperformed the S&P by a wide margin.  Now the question is whether the rally has more legs?  Below is an update look at a trade in COPX. 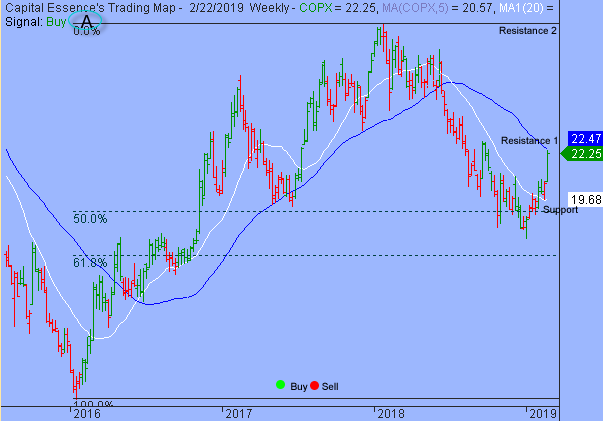 Our “U.S. Market Trading Map” painted COPX bars in green (buy) – see area ‘A’ in the chart.  The first dominant feature on the chart is the rising trend line starting in early 2016.  The second dominant feature of the chart is the downward trend since early 2018.   The late 2018 selloff found support near the 50% Fibonacci retracement.  Last week’s rally pushed the ETF up against the 1-year moving average, a key technical level based on moving average.  That level was significant when COPX fell below it in early 2018.  A sustain advance above that level on a weekly basis will trigger acceleration toward the 2018 high, just above 29.

COPX has support just below 20.  Short-term traders could use that level as the logical level to measure risk against. 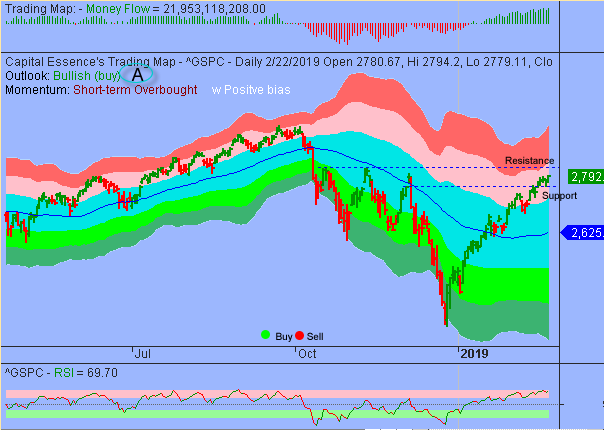 S&P rebounded nicely after Thursday retreated found support at prior breakout point.  This is a positive development but let’s notice that the rally has created overbought conditions.  Nevertheless, Money Flow measure at the highest level since summer 2018, indicating a strong net demand for stocks.  With this in mind, we’d look to reduce exposure into overbought strength, which might take the S&P closer to 2800 before a significant pullback unfolds.

As for support, 2750 is the line in the sand.  The path with least resistance remains higher as long as S&P holds above that level.

In summary, overbought conditions have returned on a daily basis but momentum remains supportive. It is possible that S&P could continue to drift higher as trading sentiment remains strong.  As for strategy, we’d look to reduce exposure into overbought strength, which might take the S&P closer to 2800 before a significant pullback unfolds.