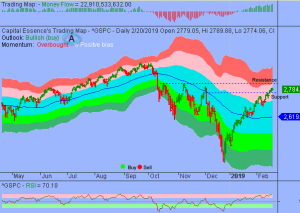 We’ve noted in the previous Market Outlook that: “S&P has confirmed a breakout above key resistance in a reflection of improved momentums.  Market internals remain supportive of further upside follow-through.  So it seems to us that the rally can be sustained for a few days, potentially allowing for a test of 2800 before a significant pullback unfolds.”  As anticipated, the S&P closed 0.2 percent higher at 2,784.70 Wednesday, as the minutes from the Federal Reserve’s January meeting came in mostly in-line with expectations.  The Dow Jones Industrial Average also rose 0.2 percent to 25,954.44.  The Nasdaq Composite, however, finished flat.  The CBOE Volatility Index (VIX), widely considered the best gauge of fear in the market, fell nearly 6 percent to 14.02.

Semiconductor stocks outperformed, driven in part by an upbeat earnings report from Analog Devices (ADI).  As such, the iShares PHLX Semiconductor ETF (SOXX) rose 0.82 percent on the day and is up nearly 18 percent YTD, outperformed the S&P.  Now the question is whether the rally has more legs?  Below is an update look at a trade in SOXX.

Our “U.S. Market Trading Map” painted SOXX bars in green (buy) – see area ‘A’ in the chart.  SOXX has been on a tear in recent months after the late 2018 selloff found support near the 38.2% Fibonacci retracement of the 2015-2018 upswing.  That level roughly corresponds with the late 2017 breakout point.  This week’s rally pushed the ETF up against the 2018 falling trend line, around 186.  That level is significant in charting terms.  A close above it will break the bearish pattern of lower highs and lower lows and trigger acceleration toward the 2018 highs, around 199.

SOXX has support near 176.  Short-term traders could use that level as the logical level to measure risk against. 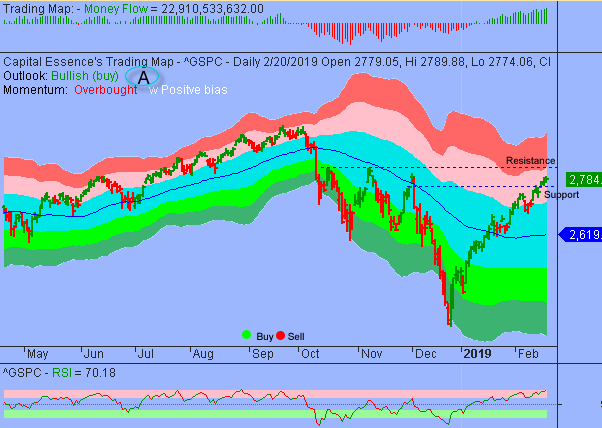 S&P continues drifting higher after breakout above the late 2018 breakdown gap last week. This is a bullish development but let’s notice that momentum indicator reached extreme overbought zone, suggesting the market is a bit ahead of itself.  However, the fact that the S&P managed to hold on to most of recent gains despite overbought conditions is impressive.  This certainly would argue that the near-term risk remains to the upside.  Perhaps the positive Money Flow measure is the best illustration of the bull’s case.

As for support, 2740 is the line in the sand.  The path with least resistance remains higher as long as S&P holds above that level.

In summary, although overbought condition is keeping buyers at bay, S&P’s 2800 will continue to act as price magnet. As for strategy, traders should consider purchase stocks during short-term dips in the market and stay bullish.