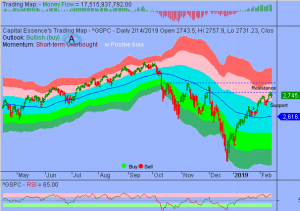 We’ve noted in the previous Market Outlook that: “S&P is overbought and due to consolidate.”  As anticipated, S&P closed lower Thursday as disappointing retail sales data for December played into the market’s concerns about a U.S. economic slowdown.  For the day, the bench mark gauge dipped 0.27 percent to 2,745.72.  The Dow Jones Industrial Average fell 0.4 percent to 25,439.39. The Nasdaq Composite, however, eked out a gain of 0.1 percent to close at 7,426.95.  The CBOE Volatility Index (VIX), widely considered the best gauge of fear in the market, jumped more than 3 percent to 16.22.

Tech stocks attracted some buying interest after Cisco Systems (CSCO) reported upbeat earnings estimates, guiding Q3 revenue above consensus, raising its quarterly dividend by 6.0%, and approving a $15 billion increase to its stock repurchase program.  As such, the Technology Select Sector SPDR ETF (XLK) rose 0.17 percent on the day and is up more than 11 percent YTD, outperformed the S&P.  Now the question is whether the rally has more legs?  Below is an update look at a trade in XLK. 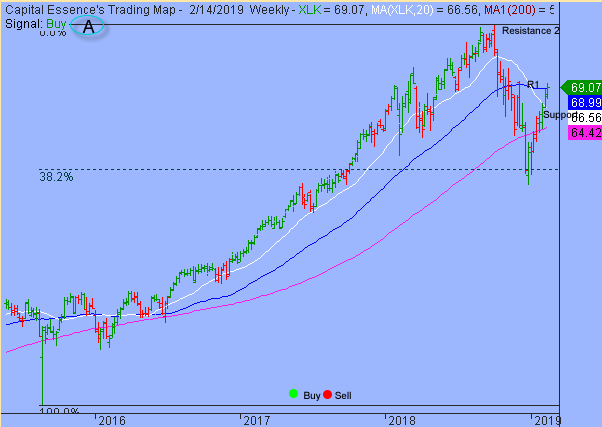 Our “U.S. Market Trading Map” painted XLK bars in green (buy) – see area ‘A’ in the chart.  XLI has been on a tear in recent months after the late 2018 selloff found support near the 38.2% Fibonacci retracement of the 2016-2018 upswing. This week’s rally pushed the ETF above the 1-year moving average, a key technical level based on moving averages.  This is a positive development, opened up for a retest of the 2018 high, around 76.

XLK has support near 66.50.  Short-term traders could use that level as the logical level to measure risk against. 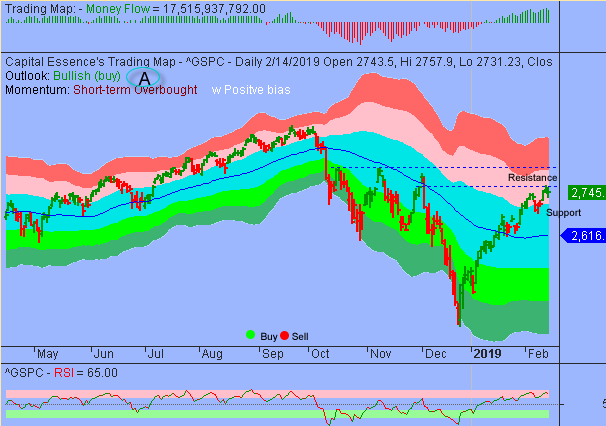 As expected, S&P retreated after the early February rally ran out of steam near the late 2018 breakdown gap.  This level was significant when the index fell below it in December. Momentum indicator shifted lower from overbought, suggesting further short-term weakness likely.  Nevertheless, Money Flow measure hovers near the highest level since September 2018, indicating a strong net demand for stocks.  This could help putting a short-term floor under the market.

While more backing and filling would not be a surprise, a close above 2760 on a weekly basis would trigger acceleration toward the important sentiment 2800 mark.  That level roughly corresponds with 2018 highs and the lower boundary of the pink band.

In summary, the big picture remains the same. There is a consolidation near the late 2018 breakdown gap, which represents digestion period.  S&P’s 2760 is the line in the sand.  A close above that level could trigger acceleration toward 2800.