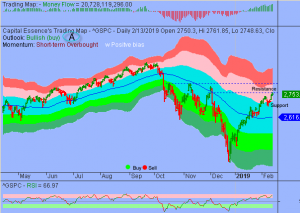 We’ve noted in the previous Market Outlook that: “S&P cleared key resistance Tuesday, signified the one-week congestion pattern had resolved itself into a new upswing.  Nevertheless, it will be important to monitor the retreat and rebound behaviors over the next few days to determine whether breakouts are decisive.”  As anticipated, S&P increased as much as 0.6 percent on Wednesday, as continued optimism that U.S.-China trade talks were progressing favorably underpinned another broad-based rally.  However, a wave of selling activity in the final 30 minutes knocked the bench mark down.  The S&P ended the session up 0.3 percent to close at 2,753.03.  The Dow Jones Industrial Average climbed 0.5 percent to 25,543.27.  The Nasdaq Composite advanced 0.08 percent to 7,420.38.  The CBOE Volatility Index (VIX), widely considered the best gauge of fear in the market, added more than 1 percent to 15.65.

Nine of the 11 S&P sectors finished higher with energy and industrials leading the advance.  Energy stocks got a boost from higher oil prices while optimism that Chinese and U.S. trade authorities would reach an agreement before a deadline in early March sent industrial stocks higher.  As such, the Industrial Select Sector SPDR ETF (XLI) rose 0.59 percent on the day and is up more than 16 percent YTD, outperformed the S&P.  Now the question is whether the rally has more legs?  Below is an update look at a trade in XLI. 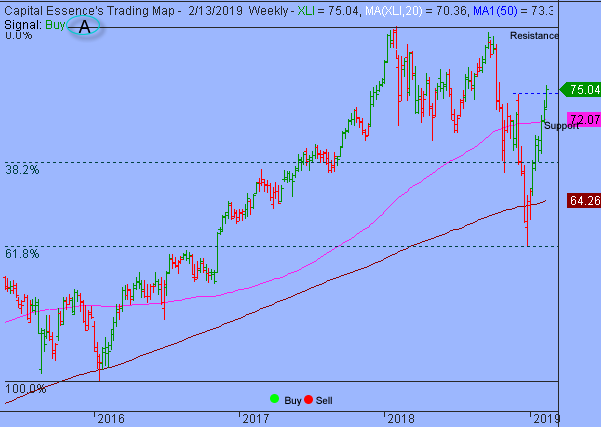 Our “U.S. Market Trading Map” painted XLI bars in green (buy) – see area ‘A’ in the chart.  XLI has been on a tear in recent months after the late 2018 selloff found support near the 61.8% Fibonacci retracement of the 2016-2018 upswing. The January massive rally pushed the ETF above the 2-year moving average, a key technical level based on moving averages.  This week’s upside follow-through propelled XLI above the December reaction high, clearing an important hurdle and opened up for a test of the 2018 highs, just below 81.

XLI has support near 72.  Short-term traders could use that level as the logical level to measure risk against. 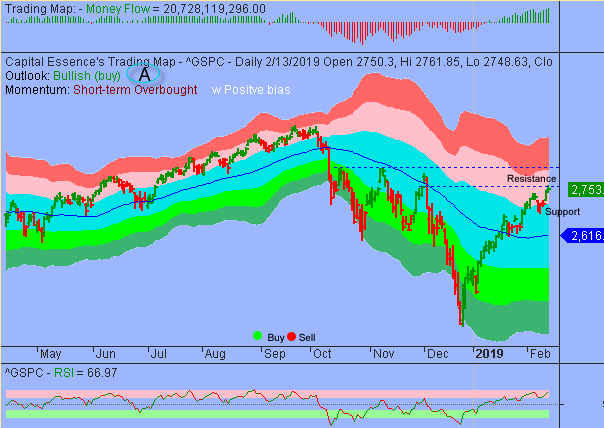 Wednesday’s upside follow-through confirmed Tuesday’s bullish breakout signal.  The rally pushed the S&P up against the late 2018 breakdown gap.  This level was significant when the index fell below it in December.  It’s also worth noticing that the rally has created overbought conditions.  Momentum indicator had reached the level that’d trigger a short-term pullback consolidation in the past months.  With this in mind, we’d look to reduce upside exposure into intraday rallies.

In summary, S&P is overbought and due to consolidate.  Nevertheless, the overall technical backdrop remains positive so pullback should be shallow and quick.  With that said, while some backing and filling would not be a surprise, if the S&P could pause and hold above 2730 then a move above 2800 would be easier to be sustained.