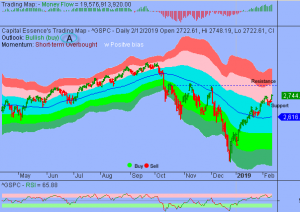 Stocks closed higher Tuesday as optimism that U.S. lawmakers reached a tentative agreement to prevent another government shutdown helped fuel broad-based buying interest.  For the day, the S&P climbed 1.3 percent to 2,744.73.  The Dow Jones Industrial Average rose 1.5 percent to close at 25,425.76.  The Nasdaq Composite advanced 1.46 percent to 7,414.62.  The CBOE Volatility Index (VIX), widely considered the best gauge of fear in the market, fell more than 3 percent to 15.43.

Bank stocks attracted strong buying support Tuesday led by gains from Goldman Sachs, Citigroup and Morgan Stanley all rose at least 1.6 percent. Bank of America and J.P. Morgan Chase also gained at least 1 percent.  As such, the SPDR S&P Regional Banking ETF (KRE) rose 1.04 percent on the day and is up more than 18 percent YTD, outperformed the S&P.  Now the question is whether the rally has more legs?  Below is an update look at a trade in KRE. 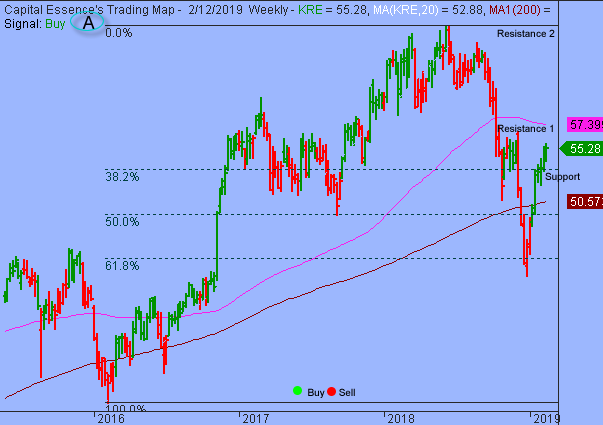 Our “U.S. Market Trading Map” painted KRE bars in green (buy) – see area ‘A’ in the chart.  KRE has been on a tear in recent months after the late 2018 selloff found support near the 61.8% Fibonacci retracement of the 2016-2018 upswing.  Last week’s rally pushed the ETF above the 38.2% Fibonacci retracement, a key technical level based on Fibonacci levels.  This week’s upside follow-through confirmed the bullish breakout.  This is a positive development and opened up for a test of the more important resistance near the 57 zone.  A close above that level has measured move to 66, or the 2018 highs.

KRE has support near 53.  Short-term traders could use that level as the logical level to measure risk against. 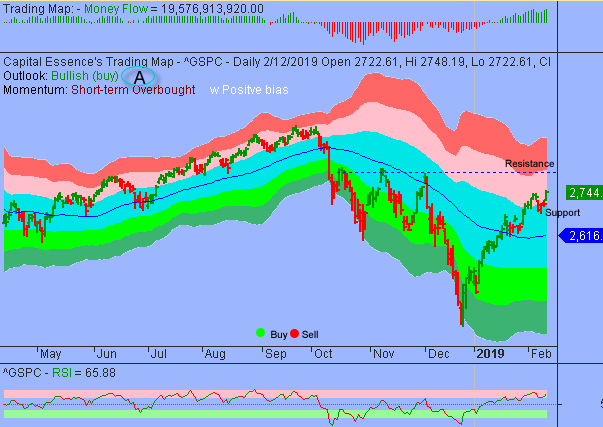 Key technical development in Tuesday session was a close above 2739, the early February high.  This is a positive development, suggesting that the one-week congestion pattern has resolved itself into a new upswing.  Money Flow measure trended higher from above the zero line, indicating an increase in buying pressure. These elements increased the probability for a test of resistance near the 2800 zone.  That level is significant in charting terms.  It roughly corresponds with the October-December 2018 highs and the upper boundary of the pink band

In summary, S&P cleared key resistance Tuesday, signified the one-week congestion pattern had resolved itself into a new upswing.  Nevertheless, it will be important to monitor the retreat and rebound behaviors over the next few days to determine whether breakouts are decisive.