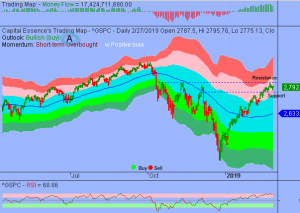 We’ve noted in the previous Market Outlook that: “an overbought pullback consolidation interrupted the early February rally in the S&P.  Although seemingly vulnerable to further short-term weakness, the overall technical backdrop remains positive so sell-off could be shallow and quick because the sideline money will try to fight its way back into the market.”  As anticipated, the S&P was down as much as 0.7 percent in early Wednesday but climbed back to its flat line in the afternoon as investors weighed a handful of headlines on the political, monetary, and geopolitical fronts, as well as the latest batch of earnings reports.  For the day, the bench mark gauge slipped less than 0.1 percent to 2,792.38.  The Dow Jones Industrial Average lost 0.3 percent to 25,985.16.  The Nasdaq Composite eked out a small gain, closing nearly 0.1 percent higher at 7,554.51.  The CBOE Volatility Index (VIX), widely considered the best gauge of fear in the market, fell more than 3 percent to 14.70.

Retail stocks attracted strong buying support Wednesday amid a fresh batch of better-than-expected results from Lowe’s (LOW), TJX (TJX) and Best Buy (BBY).  As such, the SPDR S&P Retail ETF (XRT) rose 1.01 percent on the day but is up more than 12 percent YTD, slightly outperformed the S&P.  Now the question is whether the rally has more legs?  Below is an update look at a trade in XRT. 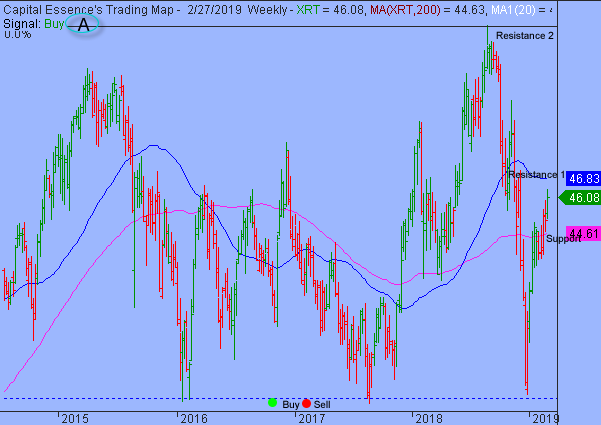 Our “U.S. Market Trading Map” painted XRT bars in green (buy) – see area ‘A’ in the chart. XRT has been on a tear in recent days after the December selloff found support near the 2016-2017 lows.  This week’s upside follow-through confirmed the mid-February bullish breakout above the 2-year moving average, a key technical level based on moving average.  That level was significant when XRT fell below it in December.  Over the next few weeks, traders should monitor trading behavior as the 1-year moving average, just below 47, is tested as resistance.  A close above that level has measured move to around 53, or the 2018 high.

XRT has support just below 45.  Short-term traders could use that level as the logical level to measure risk against. 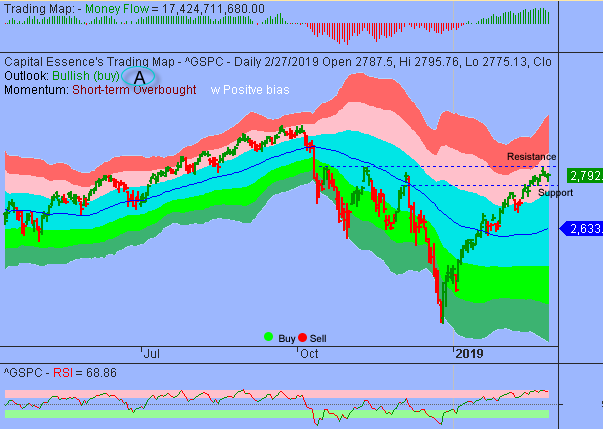 S&P moved down to test support at recent breakout point after the February rally ran out of steam near the important sentiment 2800 mark.  In accordance to the Japanese candlestick pattern recognition, Wednesday’s bullish long tail candlestick is a clear indication of demand overwhelming supply.  If the textbook stands true then the S&P is at or very close to key turning point.

Over the next few days, traders should monitor trading behavior near 2790.  A failure to hold above that level will trigger a short-term sell signal with downside target near 2750.

In summary, the bullish reversal doji candlestick pattern in the S& together with the sold technical backdrop suggested strongly that the market is at or very close to a near-term low.  So it wouldn’t surprise us to see at least an attempt to rally over the next couple of days.