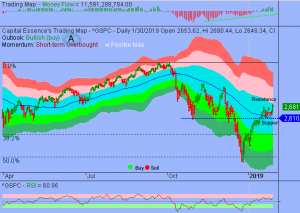 We’ve noted in the previous Market Outlook that: “the big picture remains the same. There is an orderly pullback consolidation, which represents digestion period.  There is a high probability that the S&P will break out from current trading range as soon as the market shakes off weak hands bulls.”  As anticipated, stocks rose sharply on Wednesday after the Federal Reserve kept interest rates unchanged and said it will be “patient” with raising rates moving forward. For the day, the S&P gained 1.56 percent. The Dow Jones Industrial Average gained 1.8 percent.  The Nasdaq Composite advanced 2.2 percent.  The CBOE Volatility Index (VIX), widely considered the best gauge of fear in the market, fell more than 7 percent to 17.66.

Apple’s (AAPL) better-than-feared earnings and Boeing’s (BA) impressive report fueled broad-based buying interest.  All 11 S&P sectors finished higher with information technology and consumer discretionary leading the advance.  As such, the Consumer Discretionary Select Sector SPDR ETF (XLY) surged 1.97 percent on the day and is up nearly 9 percent YTD, outperformed the S&P.  Now the question is whether the rally has more legs?  Below is an update look at a trade in XLY. 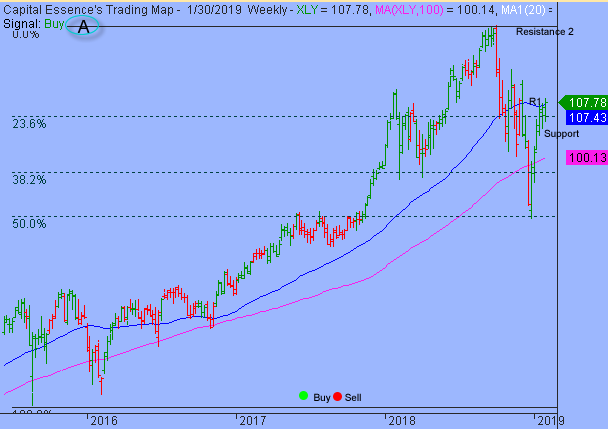 Our “U.S. Market Trading Map” painted XLY bars in green (buy) – see area ‘A’ in the chart.  The first dominant feature on the chart is the rising line starting in 2015.  The second dominant feature of the chart is the downward trend since late 2018, which represented the digestion period.  XLY has been on a tear in recent weeks after the December selloff found support near the 50% Fibonacci retracement.  The late December rally pushed the ETF above the 1-year moving average, a key level based on moving averages.  A close above that level on a weekly basis would trigger acceleration toward the 2018 high, around 118.

XLY has support near 103.  Short-term traders could use that level as the logical level to measure risk against. 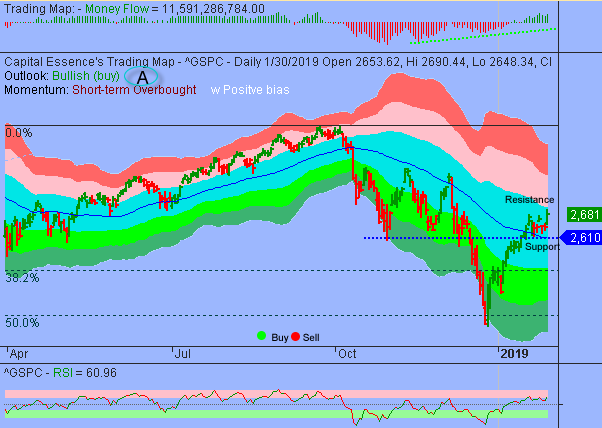 As expected, the S&P broke above the mid-January high after recent pullback found support at the trend channel moving average. This is a positive development, suggesting that the short-term sideways trading pattern has resolved itself into a new upswing.  Money Flow measure trended higher from above the zero line, indicating an increase in buying pressure.  These elements increased the probability for a rapid advance toward the next level of resistance near the 2700-2740 zone.

In summary, S&P broke key resistance Wednesday, signify a bullish breakout and upside reversal. Breakout target is around 2700-2740.  Nevertheless, it will be important to monitor the retreat and rebound behaviors over the next few days to determine whether breakouts are decisive.