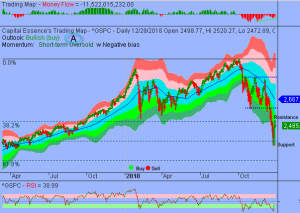 We’ve noted in the previous Market Outlook that: “the big picture remains the same, the S&P index is in an early stage of an oversold relief rally.  Nevertheless, the bulls must hurdle and sustain above 2500 or market will work off oversold conditions and fall under its own weight.”  As anticipated, S&P closed slightly lower Friday, down 0.1 percent lower to 2,485.7, in what was another whipsaw day of trading that saw the index up as much 1.3 percent at its high and down as much as 0.6 percent at its low.  The Dow Jones Industrial Average fell 0.3 percent to 23,062.40 and the Nasdaq Composite added 0.1 percent to end at 6,584.52. CBOE Volatility Index (VIX), widely considered the best gauge of fear in the market, fell more than 5 percent to 28.34.

The S&P sectors finished mixed with energy and materials underperforming while consumer discretionary and real estate sectors outperformed the broader market.  The Consumer Discretionary Select Sector SPDR ETF (XLY) rose 0.1 percent on the day but is down less than a percent YTD, outperformed the S&P by a wide margin.  Now the question is whether the rally has more legs?  Below is an update look at a trade in XLY. 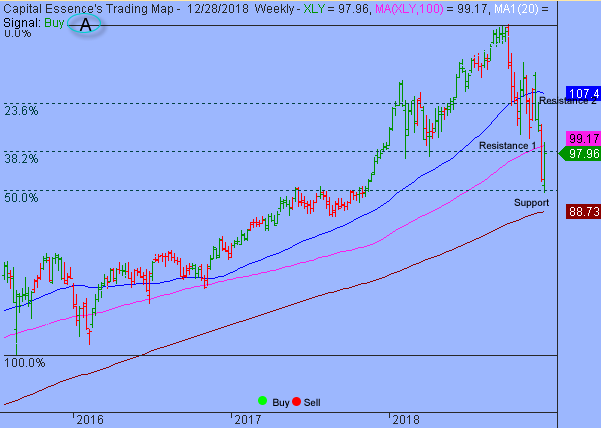 Our “U.S. Market Trading Map” painted XLY bars in green (buy) – see area ‘A’ in the chart.  The first dominant feature on the chart is the rising trend line starting in 2015.  The second dominant feature of the chart is the downward trend starting in late September 2018.  The December massive selloff pushed the ETF down to the 50% Fibonacci retracement.  This week’s bullish reversal suggested that the support would hold.  Over the next few weeks, traders should monitor trading behavior as the 2-year moving average and the 38.2% Fibonacci retracement, around 99, is tested as resistance.  A close above that level would open up for a test of the more important resistance near the 107 zone, or the 1-year moving average and the 23.6% Fibonacci retracement,.

XLY has support just below 92.  Short-term traders could use that level as the logical level to measure risk against. 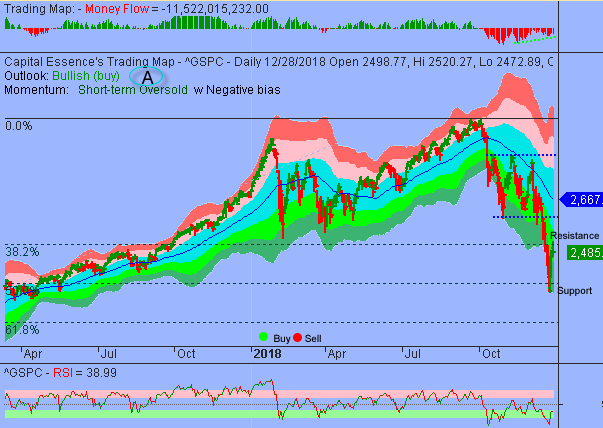 As expected, the index moved up to test resistance near the important sentiment 2500 zone.  That level roughly corresponds with the 38.2% Fibonacci retracement.  The index is now at a key juncture.  It is testing formidable resistance from below. Upside momentum has been strengthened but does not appeared strong enough to generate a decisive breakout.

Over the next few days, the most important thing to watch is trading behaviors near 2500.  A close above that level would support upside follow-through and a test of more important resistance in the 2600 area in the coming weeks.  While the near-term technical outlook remains supportive of further upside follow-through, given the damages done over the past weeks, there is a no reason to turn particularly bullish until the 2600 zone is eclipsed.

In summary, S&P is at key technical juncture.  Current rally is testing formidable resistance at the 2500 zone.  The longer the index stay below that level, the more vulnerable it is to lower prices.