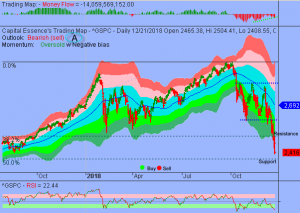 We’ve noted in the previous Market Outlook that: “the S&P is extremely oversold following recent decline.  Like a rubber band, stocks tend to snap back to the mean if they have dropped too far from the “fair” value. With that said, if lower stock prices create some values for investors, then, given everything being equal, the market should be able to find some buyers.  However, give the significant damage that had been done over the past weeks, upside reward could be limited.”  As anticipated, the S&P had climbed to session highs in Friday morning action, up 1.5 percent to 2504, amid some market-soothing commentary from New York Fed President John Williams.  The market however, unable to hold on to early gains and rolled over on report that Director of the White House National Trade Council Peter Navarro told Nikkei that an agreement with China in 90 days will be difficult to attain.  For the day, the S&P fell 2.1 percent.  The Dow Jones Industrial Average dropped 1.8 percent.  The Nasdaq Composite tumbled 3 percent.  The CBOE Volatility Index (VIX), widely considered the best gauge of fear in the market, surged nearly 11 to 28.38.

Concerns about the strength of the global economy heading into next year sent transport stocks lower along with crude oil prices.  U.S. West Texas Intermediate crude oil ended Friday’s session down 29 cents at $45.59, the lowest closing price since January 2016.   The iShares Transportation Average ETF (IYT) fell 1.72 percent on the day and is down nearly 17 percent YTD, underperformed the S&P by a wide margin.  Now the question is whether recent selloff is a beginning of an end or there’re more pains ahead?  Below is an update look at a trade in IYT. 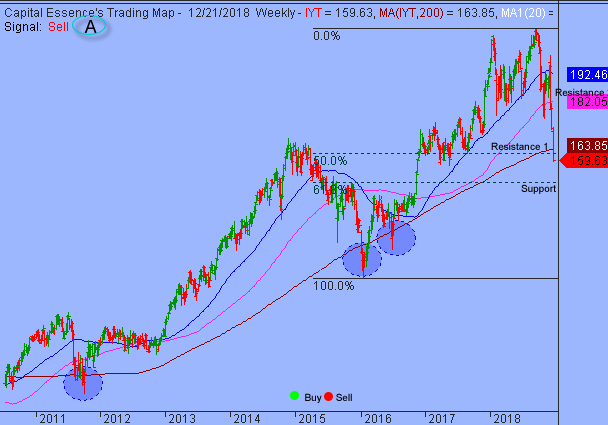 Our “U.S. Market Trading Map” painted IYT bars in red (sell) – see area ‘A’ in the chart.  The first dominant feature on the chart is the rising trend line starting in 2009.  The second dominant feature of the chart is the downward trend since September 2018.  IYT sold off sharply over the past couple weeks after the November rally attempt ran out of steam near the 1-year moving average.  Last week’s massive selloff pushed the ETF below the 50% Fibonacci retracement and the 4-year moving average.  That level is significant in charting terms.  It was tested several times over the past years and offered extraordinary buying opportunities to those whose can stomach the wild rides.  IYT has resistance near 164.  A close above that level will open up for a test of the 182-190 zone.

IYT has support near 150, or the 61.8% Fibonacci retracement.  Short-term traders could use that level as the logical level to measure risk against.  A close below that level has measured move to 115, or the 2016 low. 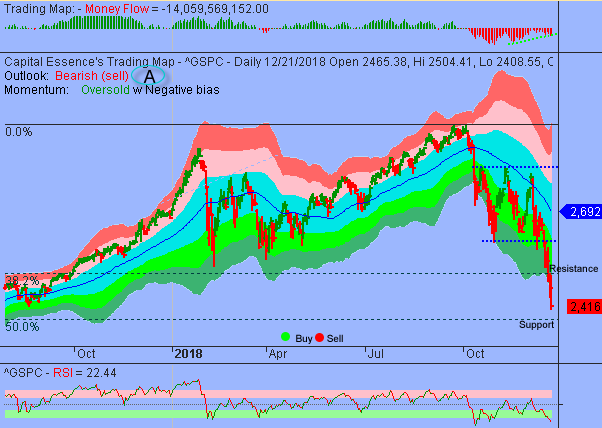 Last week’s massive selloff pushed the S&P below its normal trading range and into extreme oversold territory.  While extreme oversold condition is normal during long-term downtrend, it suggested that downside momentum might not sustain without at least a short-term breather.  In fact, current trading pattern is very similar to the October selloffs.  As shown, after fell below the bottom of its short-term trading range on October 11 and again on October 24, the index traded lower throughout the week. The S&P formed a significant short-term low on October 29 and traded higher throughout the following weeks. With that said, if history is any guidance then traders should expect at least an attempt to rally toward immediate resistance at the 2500-2530 zone.

On the downside, support is strong near the 2380-2340 zone, of the 50% Fibonacci retracement of the 2016 upswing and the 4-year moving average.  Although not expected this week, a close below 2340 on a weekly basis will break the multi-year bull trend.

On the upside, 2600 is the line in the sand.  There is a no reason to turn particularly bullish until this area is eclipsed.

In summary, recent market activities are showing some signs of capitulation among traders.  It seems to us that we will likely capitulate just below S&P’s 2400 zone. Right now the strategy is to wait for a bounce trade as soon as price patterns show us that the level of maximum pain has been reached.